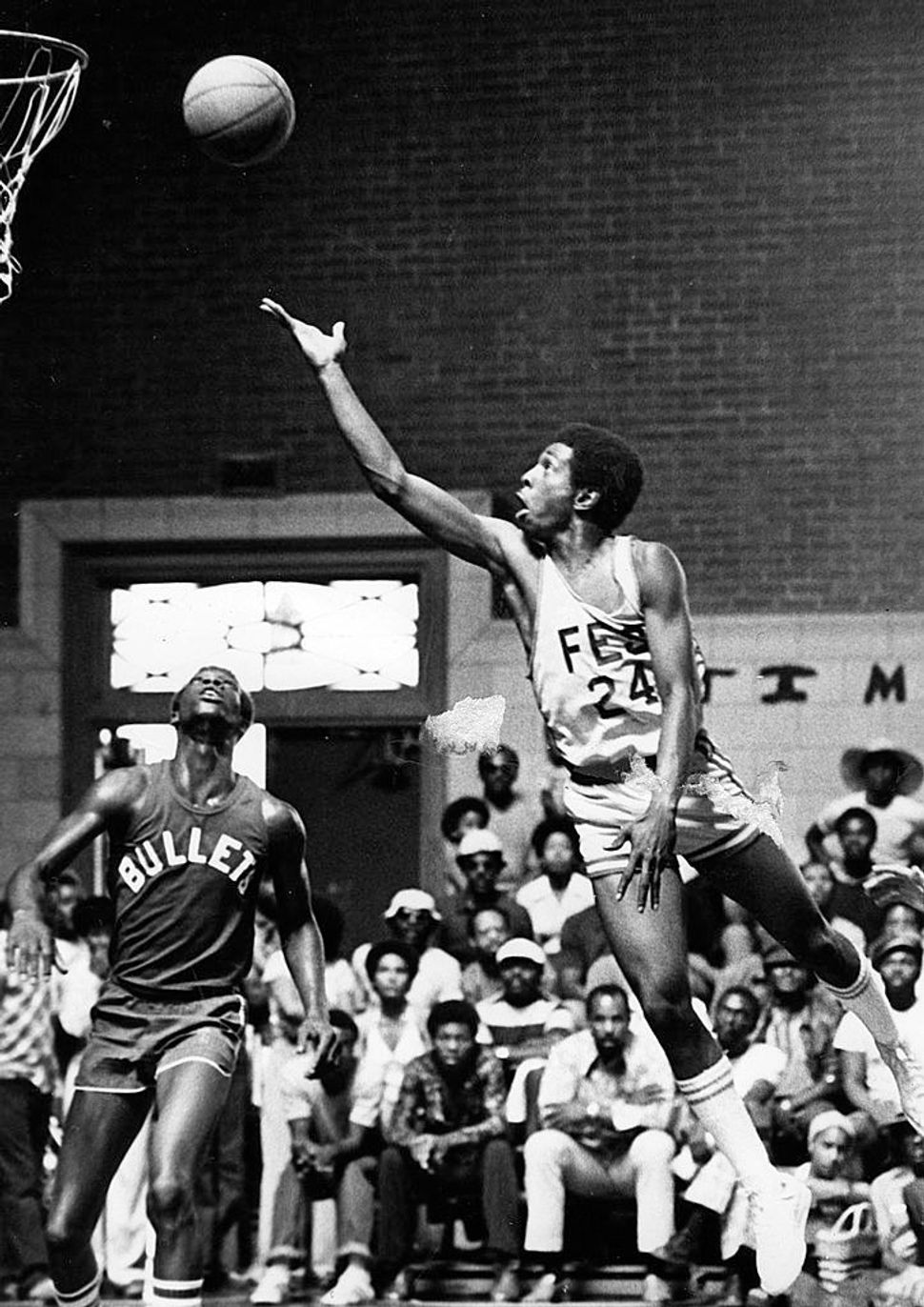 A 1980 game between the Washington Bullets and FES Unlimited of New York. Image by Getty

Washington, D.C.’s football team announced on Monday that it was changing its name after years of protest from Native Americans, but the milestone move comes 25 years after the city’s basketball team did something similar.

That decision — on the part of the team known today as the Washington Wizards — has a little-known Jewish backstory.

The team formerly known as the Redskins made its statement amid a nationwide reckoning with systemic racism and new pressure from influential sponsors like FedEx, which threatened to sever ties unless the name was changed.

Similarly, when the Jewish owner of the team known then as the Washington Bullets, Abe Pollin, decreed in 1995 that they would henceforth be known as something else, he’d been considering the move for a long while, given D.C.’s struggles with gun violence.

The proximate cause, however, was the assassination of Pollin’s friend, Israeli Prime Minister Yitzhak Rabin.

“My friend was shot in the back by bullets,” he said. “The name ‘Bullets’ is no longer appropriate for a sports team.”

When construction mogul Pollin died in 2009, he was the longest-standing owner in the N.B.A, famous for his leadership and the modern stadiums he constructed for his teams.

But his 1964 purchase of Baltimore’s N.B.A. franchise, then known as the Baltimore Bullets, was his first foray into that world. It was a decision his wife, Irene, called a “distraction” from a tragic year that saw the loss of several family members, including their 16-year-old daughter.

Just a few years later, in 1968, Pollin took a call from officials at the Israeli Embassy in Washington, D.C., who knew he had a tennis court and offered him the chance to face off with Yitzchak Rabin, then Israel’s ambassador to the United States.

“Oh, boy,” he said in an interview with the New York Times. “We became friends. His wife. My wife. Our children.”

By the 1990s, Rabin had returned to his homeland and become a Prime Minister loved and reviled for his efforts to foster a lasting Israeli-Palestinian peace. Meanwhile, Pollin’s basketball team, which now played in suburban Maryland as the Washington Bullets, were floundering. In 1995, as they prepared to move to a new stadium in the heart of the nation’s capital, they’d gone years without a winning season. Associations between “bullets” and gun violence aside, their protracted slump predisposed Pollin to the name change even before Rabin’s assassination.

And while the renaming process was no picnic — Susan O’Malley, the team’s president, said it was like “It’s 4 million people trying to name a baby” — the team has now been the Washington Wizards, for two decades.

Born in Philadelphia, Pollin attended George Washington University and worked for his father’s construction business before launching his own in 1957. Besides the Bullets-slash-Wizards, he owned the NHL’s Capitals and the WNBA’s Mystics. He sold the Capitals and the Mystics before his death, and a friend bought the Wizards after he died.

Pollin never publicly weighed in on the controversy surrounding the Redskins’ name. But his son, University of Massachusetts-Amherst economics professor Robert Pollin, did. In a 2014 Washington Post op-ed, he said that Redskins owner Dan Snyder, who is also Jewish, should take a cue from his father’s willingness to change.

“He needs to recognize that the most ethical thing he can do is to stop upholding a name that Native Americans consider a racist slur,” Pollin said.