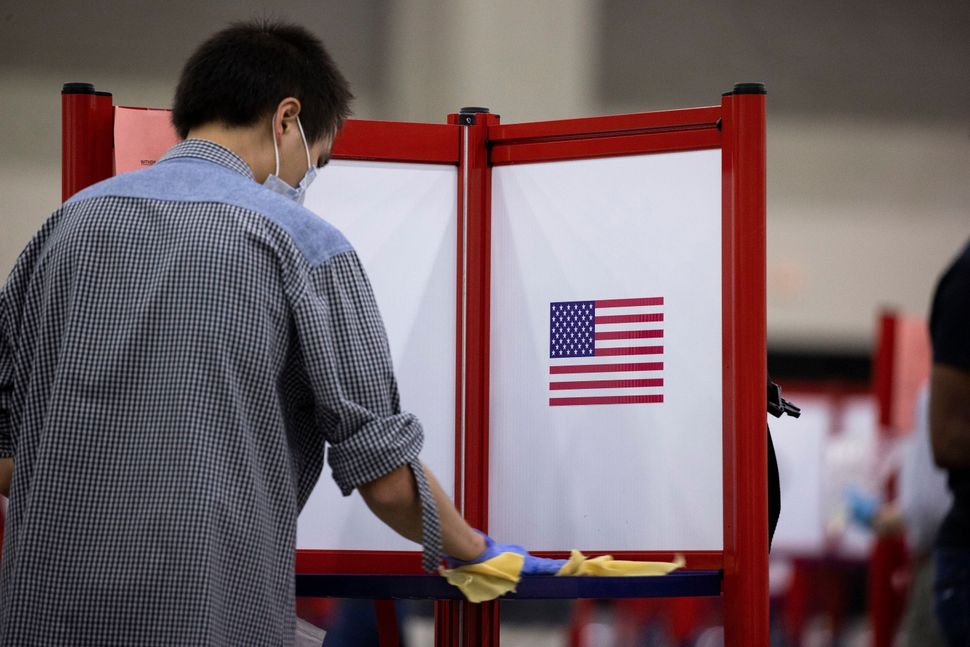 A polling worker cleans a voting booth between voters on June 23, 2020 in Louisville, Kentucky. Image by Brett Carlsen/Getty Images

Lily Gray, a college senior from Minnesota, wants her generation to turn out at polling stations this November – not just as voters, but also as election day poll workers.

“When younger people think of civic engagement, all they think about is voting, but really there’s a vast variety of opportunities that they can do,” she said.

Officials have warned for years that not enough people are signing up for a day’s work checking IDs and handing out stickers. The job might be low-intensity, but it’s of the utmost importance to keep the gears of democracy turning. More than half of poll workers are 61 and over, putting them at higher risk for COVID; no-show poll workers during primaries in Georgia led to hours-long lines for voters. Gray was struck by the images of those lines, calling them “insane,” spurring her to try to do something about it.

In the past few weeks, she’s already gotten 19 teens and twentysomethings signed up to work Minnesota’s August primary, with several more expressing interest in doing so for the November general election. Getting young, healthy people to work those jobs would mitigate the risks of long lines and other things that can lead to voter suppression, she said.

Being on-site at their polling place would also give them less of an excuse not to vote, Gray pointed out. She’s also the deputy campaign director for Minnesota Jewish Democrats, a new volunteer group that is coordinating efforts with the Biden campaign’s Jewish engagement director and Jewish Democratic clubs in five other battleground states. She hasn’t shared the idea with others in her coalition yet, but says she plans to do so if the August primary plan goes well.

The 2020 election will be the first where Generation Z, people born in the late 1990s or afterward, will be able to vote in large numbers. Generation Z is expected to strongly support Biden, but youth voting turnout is always low. However, Gray said that Jews in her generation are looking forward to voting for Biden, even if, like her, their first choice was someone more progressive.

“People are saying, ‘Even though I may not have supported Joe Biden in the primary, I understand that his values line up more with my values than Donald Trump’s do, so I’m going to vote for him,’” she said.

Gray hopes to get 30 to 50 signups in Minnesota alone, and hopes the idea spreads among Jewish youths in other states. Some other people seem to have independently come up with a similar idea – youth poll worker recruitment has been promoted in the past month by the National Council of State Legislatures and by a group of law school students at the College of William & Mary in Virginia.

Gray said the idea was an result of her passion for politics – she’s a poli-sci major – and an expression of her Jewish identity.

“When I think of Jewish values, I always think of asking questions, just a general curiosity about the world,” she said. “I think by engaging in local politics, helping out in your community, you’re sort of opening up your worldview so that you continue to ask questions of people in power and continue to challenge them, which is really important, especially right now.”