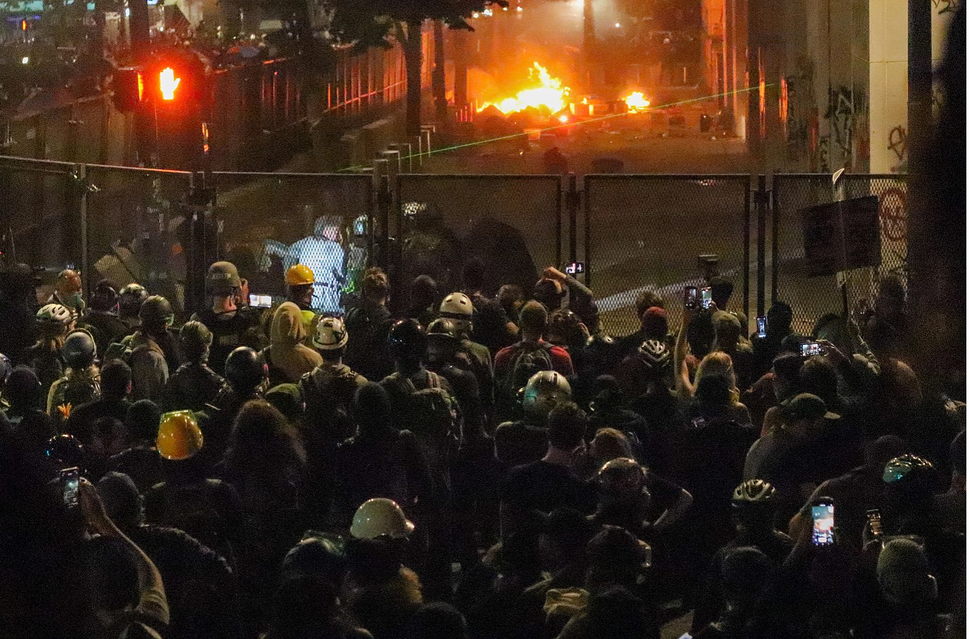 Protesters escaping clouds of tear gas and dodging flash-bang grenades. Rifle-wielding Federal agents emerging from unmarked vans to snatch protesters off the streets and whisk them away. A Navy veteran seeking answers from unidentified agents ended up beaten and left with a broken hand. A line of mothers in street clothes wearing cycling helmetsthat are smashed by riot-control officers. Clergy leaders wearing purple vests observe and witness it all.

Amid the chaos of Portland’s eight-week-long protests against police brutality, seven rabbis co-authored a letter to the Department of Homeland Security and demanded the forces leave the city.The group wants the focus of public and media attention to return to the Black Lives Matter movement’s goals for criminal justice reform — the reason for the protests. 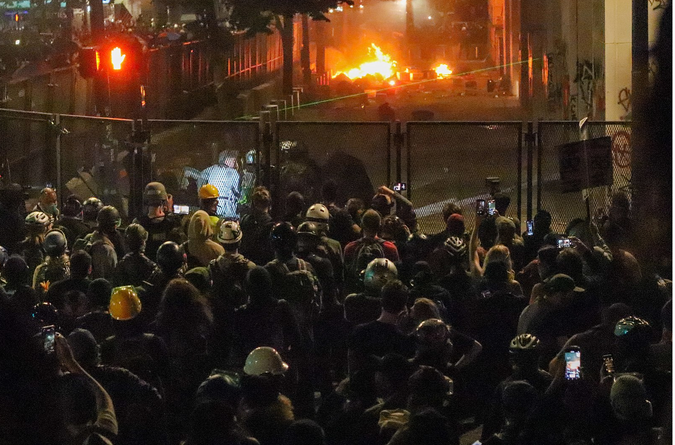 “Things got really much more difficult when the feds came to town and a lot scarier,” said. Rabbi Ariel Stone of Congregation Shir Tikvah, who co-founded the Portland Interfaith Clergy Resistance to protest police brutality, the militarization of the police, racism, and other related issues. “I found it interesting that the rising tension and fear is coterminous with the three weeks period and especially now that we’re in the nine days leading up to Tisha B’av, it’s really quite something.”

The group wears purple vests to protests in Portland to support the movement and document confrontations and police activity. Stone said dodging rubber bullets and tear gas, often unsuccessfully, is inseparable from her faith.

In addition to its presence at protests and marches, Stone’s group is active at city hall and in the ballot box and works with organizations like the NAACP and Urban League.

“We try to help move the wheels of justice,” she said. “It’s not going to be protests in the streets alone.”

Stone urged people who want to help to learn about the political power of their police departments and police unions.

“If people want to make a difference, they need to figure out what’s going on with the police force in their city and how to demilitarize it, how to take the money which is going to police forces and put it into social services, into education, in parks, in all the areas where it’s being taken from and just want to get the cops to do more and more for them,” she said. “We need to be re-envisioning what public safety looks like in our societies. We need to take our societies back from police control and we need to take responsibility for making sure that the places where we live are modeled for social justice, not for fear.”

Rabbi Benjamin Barnett of Havurah Shalom in Portland has been in the streets since the protests began after George Floyd was killed on May 25. He said protests have varied widely in size, philosophies, and methods.

“The protests here, just like in cities all over the country and the world, have taken many different forms,” he said. They range from 200 to a few thousand people, from stationary vigils and speaking events to protests that march from one side of the city to the other.

At the federal courthouse and justice center — which houses the police headquarters and county jail — Barnett says the police respond to protesters with disproportionate force. The officers fire impact munitions, swing batons, and unload tear gas and pepper spray.

These interactions have happened between protesters and Portland Police for years, Barnett said, most recently making headlines during the Black Lives Matter protests. The arrival of federal agents amid the George Floyd protests, Barnett said, was an alarming development.

The rifle-wielding, baton-swinging, camouflage-clad agents — later revealed to be from Customs and Border Protection and the U.S. Marshal’s Service — has him worried.

“With the federal agents, they are less identifiable,” he said. “Some of the most chilling scenes we’ve seen … where one of the agents will jump out of an unmarked minivan and snatch a protester off the street and take them and no one knows why they’re being arrested or where they’re being taken.”

Video from the ground appears to show local and federal law enforcement violence against unarmed protesters, medics and Portland Mayor Ted Wheeler. Barnett wants Wheeler to condemn local police the same way he has the actions of federal agents.

The rabbi spared no criticism for his own community. He said white Jews need to learn more about their racial privilege and how they benefit from systemic white supremacy even if they’re also victimized by it.

“There are many Jews of color, and for them of course the question of how racism and anti-Semitism are connected is quite different than for Jews who are white,” Barnett said. “It is essential that in whatever ways we are combating racism out in the world, we are first and foremost acknowledging that we have a lot of work to do within our own house, so to speak, to create Jewish communities in which Jews of color feel more fully at home.”

Eric Ward, the executive director of the Portland-based civil rights organization, the Western State Center, agrees with Barnett about the link between anti-Semitism and racism.

“On the very day that it was announced that this unorganized federal force was entering the city of Portland, Oregon, I also received a message from someone that told me about anti-Semitic flyers that had been distributed in a neighborhood in Portland,” Ward said.

The massacres of Latinos in El Paso, Texas last year, Jewish worshippers in the Tree of Life Synagogue in Pittsburgh the year before, and Black churchgoers in Charleston, South Carolina the day after Donald Trump announced his candidacy for president are three examples Ward cited of anti-Semitic white nationalist massacres. 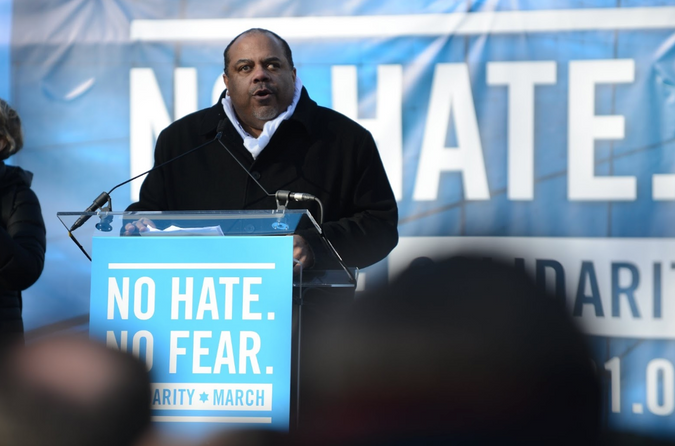 “What motivated the killers, primarily, was a belief that they were at war with the Jewish community. White nationalists believe in a conspiratorial worldview that places Jews as its existential enemy and the killings of Blacks, immigrants, Latinos, and Muslims, it believes it is waging war against what it calls a Jewish conspiracy,” he said. “So white nationalism uses anti-Semitism to fuel its movement.”

Fighting against racism and antisemitism is harder, Ward said, when you’re also trying to dodge rubber bullets and tear gas in the streets just to have your voices heard. So he sued the federal government this week to get the agents off the streets of Portland.

“What we were witnessing that disturbed us was the undermining of state and law as prescribed within the 10th Amendment,” Ward said. His main concerns are that the arrival of the federal agents has shifted the focus away from the killing of Black Americans — the original point of the marches and actions. The agents undermined the ability of community members and leaders to de-escalate violence and address other issues, and they appear unorganized with unclear goals. Thursday, a district judge ordered a temporary restriction on the use of force federal agents can use in the city, Oregon Public Broadcasting reported.

Customs and Border Protection has deployed or been requested in California, Florida, Illinois, Michigan, Minnesota, New York, Ohio, Texas, and Washington, D.C., according to a June 5 document the Department of Homeland Security published Thursday in The Nation.

“Their arrival signals something more frightening and concerning at the national level,” Ward said. “The White House made a grave error in its attempt to exploit Portland’s challenges, and what we understand here in Portland, Oregon is that if they get away with it, it will be coming to a town near you next.”