‘There must be no tolerance for anti-Semitism in America,” Donald Trumptold the Future Farmers of America following the mass murder in a Pittsburgh synagogue at a Sabbath service — the same Trump who said that some of the neo-Nazis chanting “Jews will not replace us” in Charlottesville were “very fine people.”

“It’s a terrible, terrible thing, what’s going on with hate in our country, frankly,” Trump told reporters before boarding Air Force One for Indiana.

Yesterday, hours before a Trump superfan, whose former boss called him “anti-gay, anti-black, anti-Jewish, you name it, everybody that wasn’t white,” was charged with sending pipe bombs to 14 prominent Democrats, Trump tweeted that reporters are a “very big part of the Anger we see today in our society…. It has gotten so bad and hateful that it is beyond description.”

That afternoon, in the East Room, in a dog-whistle to anti-Semites, Trump called George Soros, the first recipient of one of those pipe bombs, a “globalist.” When someone shouted “Lock him up,” Trump chuckled and repeated the chant.

That’s what’s going on with hate in our country, frankly.

Today, in Indiana, Trump condemned violence, but since the start of his campaign he’s been a cheerleader for it in rallies across the country. “I’d like to punch him in the face,” Trump told a jeering crowd in Nevada during the primaries. He told his supporters in Iowa to “knock the crap out of” protesters, promising to pay for their lawyers. A few days ago, in Montana, Trump called Republican congressman Greg Gianforte, who had body-slammed a reporter last spring, “my kind of guy.”

But when Trump is confronted with his incivility, when reporters try to hold him accountable for his bullying or misogyny, here’s what he and his surrogates say: It was a joke — I was “just kidding,” having a little fun with the crowd. Alleged pipe bomber Cesar Sayoc apparently didn’t get that joke. The neo-Nazi site Daily Stormer, didn’t made Trump their poster boy as a joke. Nor — if the asylum-seekers could hear how Trump and his party are systematically dehumanizing them as a midterms strategy— would they find it a joke.

Trump occasionally plays presidential, but even to his base, it’s clear that it’s an act. In a single speech, even in a single sentence, swinging from prompter to ad lib and back again, he can’t help himself from veering from scripted statesmanship to racism and rabble rousing. On Friday, at a rally in Charlotte, North Carolina, Trump addressed the crowd soberly. Sayoc was in custody and Trump read his scripted words:

“In recent days, we’ve had a broader conversation about the tone and civility of our national dialogue. Everyone will benefit if we can end the politics of personal destruction. We must unify as a nation in peace, love and in harmony.” 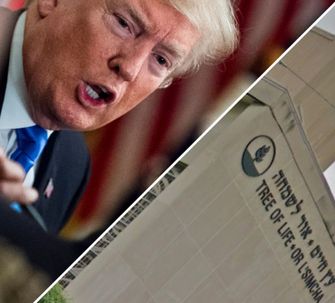 But when the crowd went flat, he junked that alien tone. He brought back “Crooked Hillary Clinton” and prompted a roar of “Lock her up!” Then, days after his supporter sent pipe bombs to the network, the President of the United States cued up “CNN sucks!” But when he slammed Maxine Waters, he omitted his usual juvenile dig: “Low I.Q.,” saying, “I’m trying to be nice,” echoing a line he used in Wisconsin: “Do you see how nice I’m behaving tonight?”

By behaving as Toto to his own Oz and pulling back the curtain on his impersonation of dignity, he undermines the idea of politicians who do care, who do have dignity, who behave with humanity because they are actually nice, not just putting on a temporary act. Just because this Wizard of Oz reveals and revels in his con, laughing along with the room at the ridiculousness of performing POTUS, doesn’t mean he’s right. Other national representatives do, and have, actual authentic decency and care about people with whom they disagree.

A surefire shtick of his is tottering around the podium like a stiff wooden soldier, saying, “I can be more presidential than any president that’s ever held this office.” Unlike, say Harrison Ford who can actually play presidential for hours at a time, Trump can’t even conceive that anyone could believe in the dignity of the post he holds. His is an act of supreme cynicism, denigrating presidential temperament as showbiz sleight-of-hand.

To Trump, everything is entertainment. Knowing the difference between thinking and magical thinking is a requirement for graduating from childhood, but knowing how reality differs from reality TV is not a skill in Trump’s toolkit. Nor is truthfulness. “What we have not seen before in our public life is politicians just blatantly, repeatedly, baldly, shamelessly, lying,” Barack Obama said last week. But for Trump, who inherited at least $413 million from his father, reality, truth and caring about other people are alien concepts. He can say what he wants because his father’s money – and now his office – will protect him from the ramifications.

Of course he thinks journalists who try to tell the truth are the enemy — truth and reality are what he’s been successfully avoiding since kindergarten.

But hiding from reality is not possible for his 300 million constituents. For them words matter. When Trump says someone is “evil,” rather than disagreeable, or that someone is “fake news,” rather than a critic, or that someone is a “globalist,” rather than someone is a Jew, he is putting targets on the back of people for whom he is supposed to work. The 5,000 lies he’s told in office from the middle of his reality TV fantasy don’t matter to him, but they can be, and have been, fatal to others. Words don’t matter to fantasists. But — at least in America — ballots do.