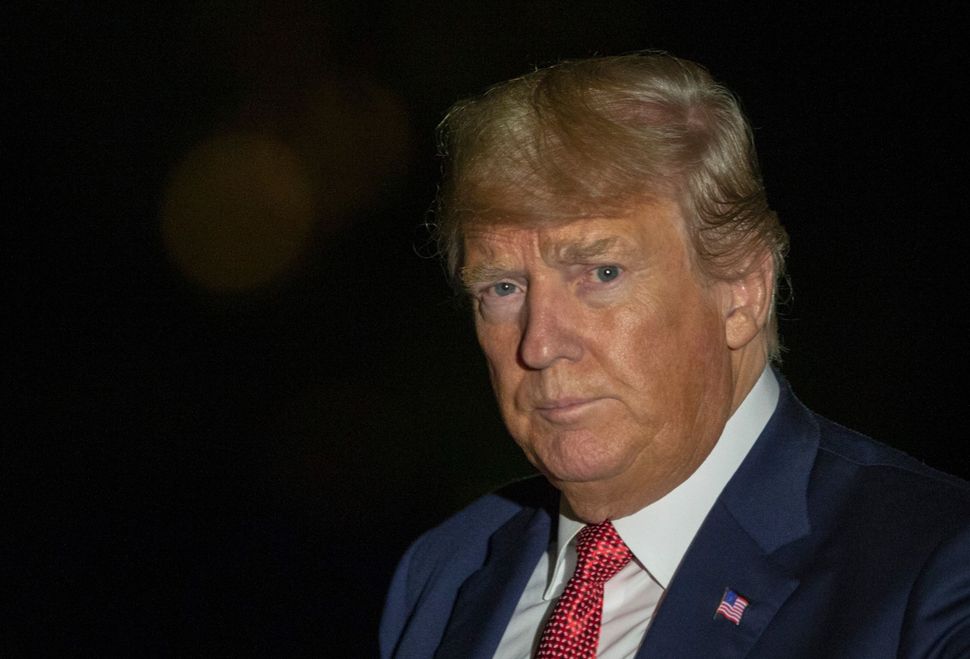 It’s understandable — hell, perhaps necessary — to inure yourself while reading most of Donald’s morning bile on Twitter. Some days are easier to ignore it than others, especially when more pressing atrocities are at hand, like the theft of a Supreme Court seat. Today’s particular Presidential sewage deserves at least a momentary pause:

“The very rude elevator screamers are paid professionals only looking to make Senators look bad. Don’t fall for it! Also, look at all of the professionally made identical signs. Paid for by Soros and others. These are not signs made in the basement with love! #Troublemakers.”

The very rude elevator screamers are paid professionals only looking to make Senators look bad. Don’t fall for it! Also, look at all of the professionally made identical signs. Paid for by Soros and others. These are not signs made in the basement from love! #Troublemakers

Trump fired this one off at 8:03am as the Senate convened for a cloture vote on accused sexual assaulter and Supreme Court nominee Brett Kavanaugh.

This isn’t just a dog-whistle. It’s an openly anti-Semitic, easily debunked conspiracy theory put forth by the President of the United States. Blaming a rich Jew for controlling the levers behind a mass protest organized by your political opponents is the stuff anti-Semitic cartoons have been made of for centuries.

In an even more macabre twist, Trump’s dog-whistle ties the bigoted trope of shadowy Jewish financiers to the bravely vocal survivors of sexual assault and trauma fighting for their lives. It implies that we Jews are funding the very women they’ve accused us of lusting over and coveting for generations.

Like almost every other thought that leaks from Donald’s head onto his phone screen, it wasn’t even his own. When asked less than an hour-and-a-half earlier by Maria Bartiromo on Fox Business if he thought George Soros might be funding protesters Senator Chuck Grassley answered, “I have heard so many people believe that. I tend to believe it.”

Maria Bartiromo asked Chuck Grassley this morning if he thinks George Soros is paying the elevator protesters. “I have heard so many people believe that. I tend to believe it,” Grassley said. Trump tweeted the accusation about 80 minutes later pic.twitter.com/az8QtMZwma

One of the main architects of the SCOTUS vacancy heist put forth this idea to discredit popular dissent, knowing Trump would take the bait as he watched from his bedroom.

The suggestion most likely gained steam when it came to light that two women who now famously confronted Senator Jeff Flake and caused him to ask for an FBI investigation work for the Center for Popular Democracy, a nonprofit which has received funding from Soros over the past couple years.

This, of course, easily fed the larger Soros-funded protester myth, as if women’s day jobs suddenly accounted for the literally thousands of Americans across the country raising hell over one party’s undemocratic machinations to secure the Judiciary branch as an insurance policy during the oncoming backlash. This despite the fact that conservative dark money funds the very politicians accusing Soros of masterminding civic unrest, and the same Trump cultists seem to appear at his rallies again and again.

As if Trump’s own people didn’t pay background fans to cheer on his famous descent down the golden elevator.

Blaming Jews for your political opponents is textbook anti-Semitism, and one that has been deployed to disastrous ends for Jews by authoritarian leaders — as well as by their imitators. Indeed, it goes both ways: A sure sign that a leader has aspirations to authoritarianism is an indulgence in anti-Semitic fantasies.

Take Viktor Orban, another leader who has little care for democratic institutions. Orban traffics in anti-Semitism, xenophobic nationalism, and homophobia, and rose to power on a smear campaigns directed at Soros, going so far as to accuse him of undermining the state of Israel.

Irnoically, Benjamin Netanyahu, Israel’s Prime Minister, makes a nice trifecta with Trump and Orban. Netanyahu has made frequent overtures to Orban. And none other than David Duke — former leader of the KKK here in Louisiana — came to Bibi’s son Yair’s defense after he posted an image online attacking Soros that was rife with anti-Semitic motifs.

In these and so many similar cases, incidental anti-Semitism can be ignored, as long as you aren’t the Jews they’re attacking.

It’s often easy to laugh off accusations of shadow-funding from liberal Jews like George Soros because of its patent absurdity and cartoonish levels of anti-Semitism. It’s hard not smile watching Shills-bury doughboys Alex Jones and Sean Hannity literally spit these conspiracies at us through our televisions and computers. They are and always will be desperate men.

When the would-be authoritarians — Zionist Jews included — start to get desperate, that’s when we need to stop smiling, because the leftist Jewish scapegoat always portends the larger scapegoating of all Jews.

Bibi might not understand the physics of hatred, but we do.

Andrew Paul has written for GQ, Slate, The Believer and Oxford American. He grew up in Mississippi, and currently lives in New Orleans.