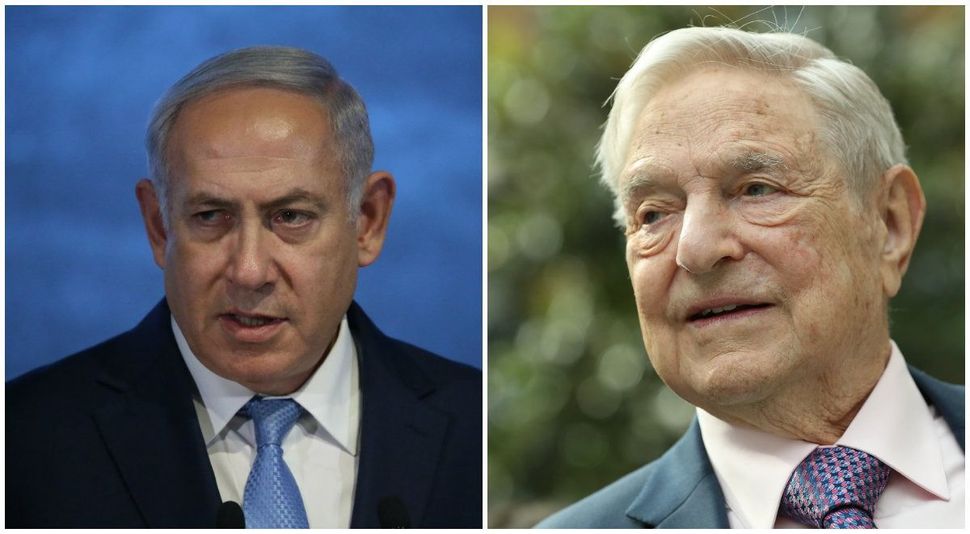 On Thursday, the British tabloid “The Telegraph” ran a cover story featuring a picture of George Soros with the headline “Man who ‘broke the Bank of England’ backing secret plot to thwart Brexit.”

The outrage against the headline’s anti-Semitic portrayal of a globalist anti-patriotic Jewish banker’s secretive plot was swift and effective.

But The Telegraph’s gaffe was hardly sui generis.

Just last Sunday, Prime Minister of Israel Benjamin Netanyahu claimed that Hungarian-American billionaire George Soros is funding protests against Israel’s planned deportation of Sudanese and Eritrean asylum seekers. Soros promptly denied that he was involved, and Netanyahu gave no evidence for his accusation.

But Soros has long been a fixation for the Israeli right. In July, the Israeli foreign ministry endorsed a Hungarian ad campaign singling out Soros, despite widespread criticism (including by the Israeli ambassador to Hungary) of the campaign’s anti-Semitism. And in September, Netanyahu’s own son Yair posted a conspiratorial, anti-Semitic image to Facebook featuring Soros dangling the world before a reptilian predator.

The spectacle of the Israeli government endorsing anti-Semitic tropes is a painful and bizarre new feature of our world. But there’s an angle from which the Right’s hatred of Soros actually makes sense.

Soros embodies a Diasporic Jewish archetype that right-wing Zionism has defined itself against: the cosmopolitan financier, the wandering Jew comfortable everywhere and at home nowhere; the liberal committed to abstract principles rather than to his particular nation. He is a reminder that another model of Jewish identity and even Jewish power exists divorced from nationalism, and as such, he is a big threat to the Zionist right.

Born in Budapest, Hungary, he was educated in England and then moved to the United States (he is hated by the nationalist right in all three countries). He has made billions gambling in currency, which was once a matter of national sovereignty but, thanks to Soros and others, has become a international market.

As in the Telegraph piece, Soros has been dubbed “The Man Who Broke the Bank of England” — that is, a capitalist to whom the nation-state yields. His business led him to the conclusion that national governments are insufficient to regulate global capitalism. “Leav[ing] it to each individual state to protect its own interests will surely lead to the breakdown of the gigantic circulatory system which goes under the name of global capitalism,” Soros warned in his book.

The anti-Semitic slurs and comparisons to Rothschild basically write themselves.

In his philanthropy too, he supports financially the values of international liberal capitalism: tolerance, internationalism, and democracy. That means funding anti-Communist protests in Eastern Europe, the liberal opposition to right-wing Hungarian nationalism, and the political campaign against Bush in 2004.

He has pledged to fight against nationalism, which he calls the “dominant ideology in the world now” and supports greater European integration, hence the anti-Brexit cash.

Perhaps most offensive of all to Jewish nationalists, Soros has said of Israel: “I don’t want anything to do with it.”

A proud and confirmed globalist, Soros learned from the Holocaust not that Jews needs a nation-state, but that the world needs less nationalism.

As Mairav Zonszein wrote back in July, “Soros’s humanitarianism and universalism represent an expression of post-Holocaust Jewish identity that is anathema to the hard-line nationalism of Mr. Netanyahu’s governing coalition.” He is the Old Jew par excellence, the deracinated banker and universal alien—an embodiment of the problem Zionism set out to solve.

To be sure, Soros and Israel or Zionism are in no way fundamentally opposed. That would be absurd, since Soros currently bankrolls massive portions of the progressive, Jewish infrastructure in Israel. I am saying that Soros is anathema for right-wing Zionism, that is, a nationalism with no respect for universal rights or values — and with no respect for Diaspora Jewry

Zionism has always been ambivalent towards Diaspora Jews, as it has always been torn on the relationship between the Jewish nation and the universal world. Eliezer Schweid has shown how Zionists have long been torn between a “negation of the exile” (shlilat hagolah) that sees Diaspora as embarrassing, weak, and morally compromised, and the needs for Israelis to identify and connect with Jewish history, which has long been Diasporic.

More broadly, there have always been universalist and particularistic strains in Zionist thought, from Revisionists like Jabotinsky who place the national collective above all, to universalists like J. L. Magnes who don’t even want a politically “Jewish” state, and imagine Israel as a secular democracy shared by Jews and Palestinians.

But over the past decade, this tension has been somewhat resolved, and not for the best. A brutal, angry, and ethno-centric form of nationalism has taken over the Israeli government and society. Netanyahu, for instance, supports a “Jewish state law” on the argument that Israel has been insufficiently Jewish over the last seventy years. West Bank settlers have entered the mainstream of Israeli politics; for the first time, a settler serves on the Israeli supreme court, and another owns a major Israeli newspaper.

The right openly rejects any vision for a Palestinian state, and it is increasingly disdainful of the democratic world. The Likud wants to regulate and limit foreign NGOs (just like far-right nationalists in Hungary and elsewhere).

Within Israeli culture, open expressions of racism are growing more common. A player for the Beitar football team said openly, “I am a racist,” and studies find that Israeli teens are increasingly comfortable with outright racism. The hatred of African refugees — or as they are called in Israel today, “infiltrators” — flows directly from this angry, exclusivist nationalism. Minister of Culture Miri Regev, who is fighting a war against Israeli culture she deems insufficiently nationalist, also said, “The Sudanese are a cancer in our body.”

What’s important to recognize here is that the right’s attacks on Soros and its plan to deport Africans flow from the same source: a newly ascendant, intense and unchecked sense that Jewish Israel ought to care exclusively about itself.

American Jews have been shocked and appalled by the Israeli government’s plan to deport 60,000 poor, stateless Africans. Thank God. To deport people traumatized by war and a brutal trek through Sudan and Egypt, subjected to violence, neglect, and living in South Tel Aviv in abject poverty—that’s a scandal.

But less obviously, the plight of the African asylum seekers is not just about how we treat the Other; it is also about how Israel views us Diaspora Jews.

The Likudniks who reject beleaguered foreigners as “infiltrators” also reject American Jews as shiftless, Diasporic self-haters. It is no accident that a government indifferent to Africans is also indifferent to American Jewish concerns about religious pluralism at the Western Wall, that a state which could expel refugees could deny entry to left-wing Jews critical of the Occupation.

The Israeli right is rapidly passing beyond nationalism into an isolationism which surveys the globe and sees only enemies.