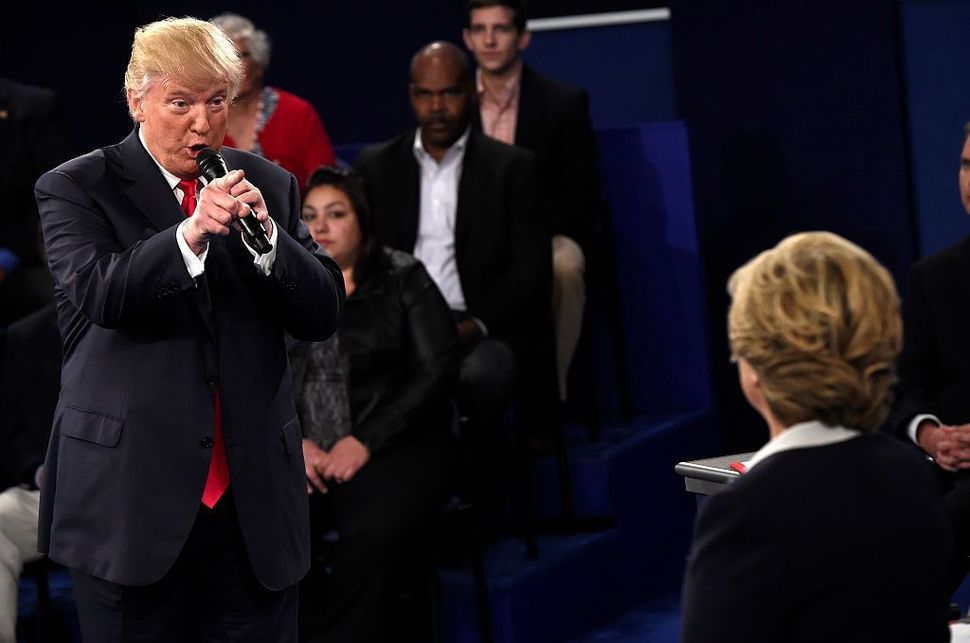 A whole lot has been said about Trump’s disastrous (and, come on, Trump supporters, it was disastrous) performance during the Second Presidential Debate. From his shameful and insulting use of Bill Clinton’s accusers as props to his threat to literally imprison his opponent to his pacing around the debate floor like a trapped, orange animal, Trump really outdid himself in the department of troubling ridiculousness.

This includes his answers to the questions posed “town hall” style from a selected audience. He continuously hijacked peoples’ questions to go on completely unrelated tangents about emails, ISIS, Benghazi, China, and any number of completely question-unrelated, often completely fact-devoid subjects. The few times he actually came closest to answering questions that audience members asked, he managed to be offensive and myopic.

Another problematic behavior The Donald decided to carry forth into this debate? Dog whistling to his anti-Semitic fan base. He repeatedly and often completely tangentially mentioned noticeably Jewish-sounding names (Sidney Blumenthal, George Soros, Jonathan Gruber, and Debbie Wasserman-Shultz), all of whom he conjured up as corrupt holders of cabal-esque power who Clinton has in her pocket.

Though frustrating, it’s easy to dismiss those dog whistles and the anti-Semitic undertones they represent as minimal, something we can forget about. This, however, is arguably a mistake, and that becomes clearer as soon as you delve into the festering underbelly of Alt-Right Twitter. Rest assured (or, rather, don’t), because lots of people were listening out for those whistles, and hearing the call.

Here are ten Tweets (among many of their kind), just in reaction to the debate alone.

(((They))) are now admitting globalism is their project – exposing themselves one at a time, beautiful!#MakeAmericaGreatAgain #AmericaFirst pic.twitter.com/cRkqY5x6bX

Did you hear that ? #Jewess @DanaBashCNN called #Trump a Hitler-Stalin. #Share the laughter. pic.twitter.com/XDMsjEzIOI

WORLDWIDE MEDIA is against TRUMP > The same JEWISH media who lied about 911 to the world (Europe, Australia, Canada, Japan, Gulf Arab…) pic.twitter.com/4JvPgUP1cr

Replace the Left with the Jew https://t.co/OH4yLpzbNX

The worst thing you can do is name the Jew. https://t.co/0bJuyvbZDT

#debate when the moderators join in pic.twitter.com/WtXiB6eTbf

There’s nothing that Jews want more than war with Russia. They thrive off of international strife. Can’t imagine why that would be. https://t.co/VqoCd9I6qI

Of course, these are just people on the internet, but forgetting that they’re there and they’re hearing Trump when he calls out to them—however subtly, or not—is a mistake. He knows they’re there, and as he loses support among more and more of the mainstream right, he’s going to rely more and more on their support.

When you whistle loud enough and long enough, it’s always possible the dog will come.