How Trump’s Anti-Immigrant Hate Led To A Synagogue Shooting 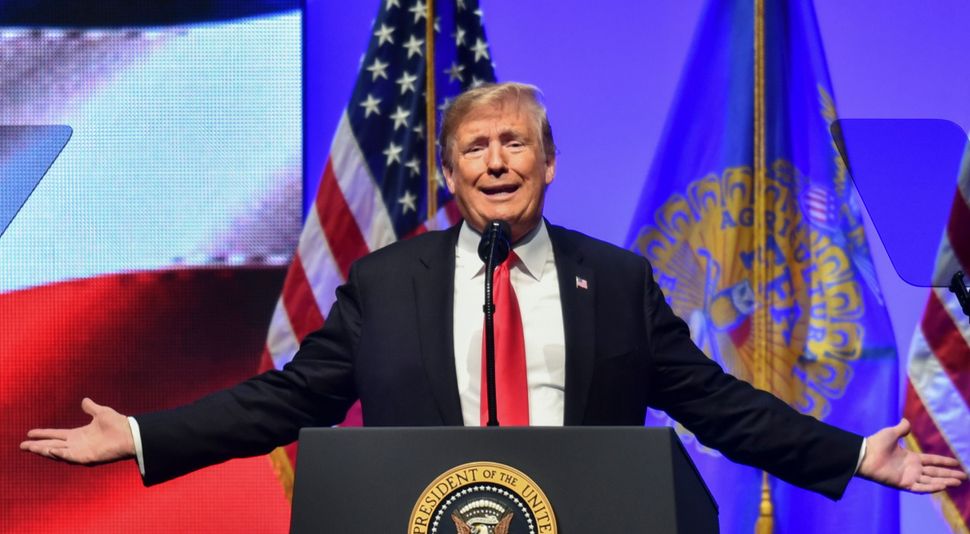 Every Saturday morning, I go to synagogue to reconnect, both with God and with my fellow Jews. This morning was like any other, featuring prayer, arguments over the sermon, and jokes over bagels and cream cheese during the kiddush luncheon. It was only after I returned home that I realized, to my horror, that while I had spent the morning praying, Jews doing the same at the Tree of Life Synagogue in Pittsburgh were attacked with gunfire and hatred.

While we’re still learning details, the alleged shooter Robert Bowers reportedly shouted “All Jews Must Die!” as he opened fire on a baby naming ceremony in the middle of Tree of Life’s Saturday morning services.

His profile on Gab – a Twitter-like social network affiliated with the “alt-right” – shows an obsession with the Hebrew Immigrant Aid Society (HIAS), a Jewish organization founded to assist Jewish refugees that today focuses on helping refugees and immigrants from many different backgrounds.

Bowers was apparently particularly incensed by last week’s National Refugee Shabbat, a HIAS project with American synagogues across the country designed to inspire Jewish communities to act to support refugees from around the world. In one of his posts on Gab, he wrote “Why hello there HIAS! You like to bring in hostile invaders to dwell among us? We appreciate the list of friends you have provided,” referring to the list of participating synagogues (including my own).

This kind of murderous hatred against Jews and HIAS hits close to home for many reasons. Bowers’ hatred of Jews could very well have led him to my synagogue, where I have participated in programming supporting HIAS and donated to assist its efforts.

Even more importantly, when my father’s family fled Communist Romania, they spent several months in Italy on their way to Israel. During that time, they received assistance and financial support from HIAS.

Both coming and going, I am the kind of Jew Bowers and his alt-right friends love to hate.

Of course, there are many organizations that support immigrants and refugees. The shooters’ choice to attack the Jewish community was nonetheless an unsurprising one, rooted in the special place Jews have in the far-right’s constellation of hatred. As Talia Lavin recently discussed in the Washington Post, the far-right has long engaged in conspiracy theories that accuse Jews of manipulating white Americans to change the racial status quo.

From racial integration to immigration, white nationalists believe that we are the shadowy force behind efforts to build a more inclusive society. Specifically, they believe that Jews – who have a long history of working in solidarity with other marginalized groups – do this not out of principle but because we seek to poison “white America” for our own sinister ends.

In many ways, anti-Semitism is a crucial ingredient for far-right conspiracy theory on these issues, because white nationalists believe people of color to lack the intelligence to mastermind such complex plots. By accusing Jews of being the real puppet-masters behind such efforts, white nationalists are able to hold on to their belief in black and hispanic intellectual inferiority while still believing that immigration and civil rights are elaborate conspiracies out to destroy “real Americans”.

The centrality of anti-Semitism to the white nationalist worldview is often lost in conversations about who has to worry about the rise of the “alt-right”. In the aftermath of Charlottesville, many Jews expressed frustration with prominent commentators on the left who presented the far-right rally as being only about racism against people of color, ignoring or even objecting to efforts to acknowledge the role that anti-Semitism played.

The marchers at Charlottesville were by no means ambiguous about their hatred for Jews. Why is it difficult to see anti-Semitism when neo-Nazis march to chants of “Jews will not replace us”? In the aftermath of today’s shooting, hopefully we will see a greater recognition of the danger Jews face from growing far-right extremism – and more investment in efforts to protect us.

Of course, when the federal government is controlled entirely by the Republican Party, including figures who display a terrifying level of comfort with and rhetorical support for white nationalism, the bulk of soul-searching should come on the right. Fighting terrorism requires acknowledging where it comes from. During the Obama Administration, conservative critics attacked President Obama for a perceived refusal to acknowledge Islamic extremism as a motivating factor in violent terrorism. Now, the Trump Administration and significant elements of the Republican Party are engaged in an actual refusal to acknowledge the violent terror emerging from the “alt-right”.

Fighting terrorism does require hardening potential targets through the use of armed guards and better security, but it also requires an acknowledgment of the source of the problem. Over the last decade, there has been a concerning refusal to acknowledge homegrown right-wing extremism as a dangerous threat comparable or perhaps greater than attackers from abroad.

While federal law enforcement authorities have developed a sophisticated understanding of the ideological and logistical infrastructure used to radicalize Muslims into supporting groups like Daesh and al-Qaeda, similar efforts to identify and act against the roots of white nationalist radicalization have been defunded, deprioritized and at times even outright attacked. We are led to believe that white nationalist terrorist attempts are merely, in the words of one prominent commentator, “a few malicious jerks…with a vindictive stunt,” hardly worthy of our time and attention.

Perhaps following similar thinking, last year the Trump administration chose to narrow the focus of a government grant program designed to fight extremism to only target Islamic extremism, taking funds away from efforts to combat far-right radicalization. There is little acknowledgment of the growing threat to our country posed by the ongoing effort of a dedicated fringe to return white nationalism to mainstream politics and energize disaffected young men to engage in violence on its behalf.

No American elected official welcomes attacks on synagogues, and politicians on both sides of the aisle have already condemned the shooting. However, we need to acknowledge the role that far-right fanaticism plays in encouraging these violent attacks. It is unrealistic to imagine that a steady, unyielding message that immigrants and liberal activists are engaged in a treasonous betrayal of America would not result in eventual violence against those being demonized.

There is a direct line from Republican candidates presenting George Soros as the shadowy puppet-master behind every instance of grassroots protest to the pipe bombs sent by Cesar Sayoc. There is a direct line from this Administration’s choice to portray refugees and immigrants as an existential threat to Robert Bowers’ attack on the Tree of Life Synagogue for the Jewish community’s support of HIAS’ efforts to welcome refugees.

We ignore these things at our peril. Those on the right who continue to believe in a democratic and pluralistic society must confront the growing power of the far-right, including among elected officials. Those on the left who persist in believing that anti-Semitism is a sideshow compared to other forms of prejudice must learn to acknowledge that Jews also face real danger, and deserve the same solidarity and protection as other marginalized groups.

As for me, I intend to deal with this in the way most likely to aggravate Robert Bowers and those who nurtured his hateful ideology: by making donations to HIAS and the Anti-Defamation League.

Then, next Saturday, I’ll be back in synagogue, where I belong.

Ari Ne’eman is a writer and activist living in Silver Spring, Maryland. He works in the disability rights movement and is an active member of a Conservative Jewish Congregation in Washington, DC.

How Trump’s Anti-Immigrant Hate Led To A Synagogue Shooting