Why Can’t I Find One High-Profile Celebrity Who Acknowledged The Anti-Semitism In Charlottesville? 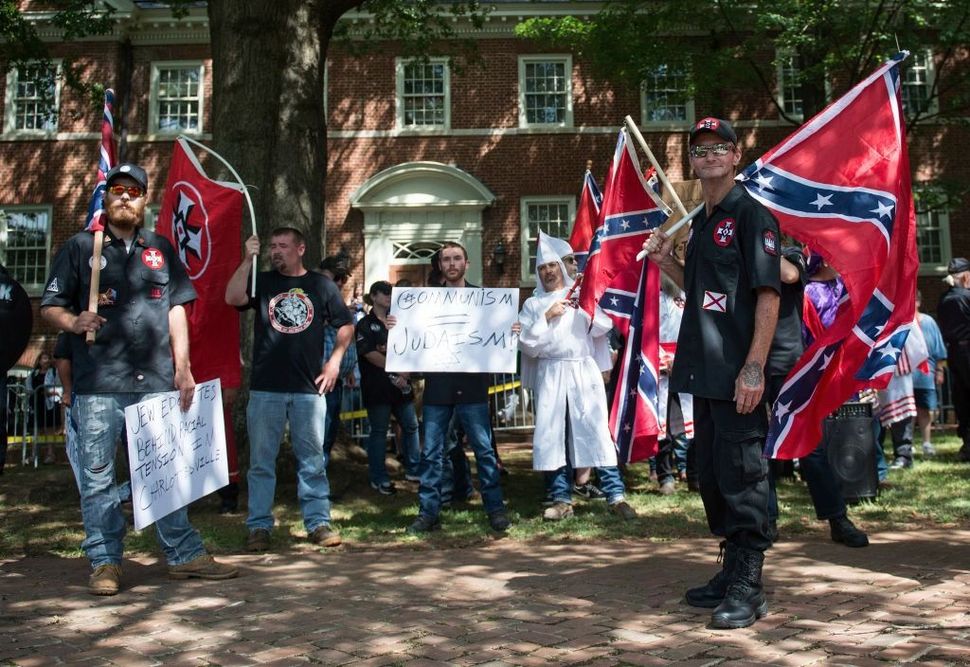 It was a scene from every Jewish American child’s personal nightmares — men flooding the streets of an American city chanting anti-Jewish threats, flanked by policemen for protection. The President refusing for several days to specifically condemn the people holding torches and chanting “Jews will not replace us.” People wearing swastikas and doing Nazi salutes in broad daylight. Twitter swelling, even beyond its usual capacity, with the basest of hatred towards Jews.

At times like these, we look to celebrities and public figures as both a comfort and a barometer of public opinion. Celebrities are people we have anointed as human idols and accepted as tastemakers; they also depend entirely on public good will and act as a mirror of our collective desires and tastes.

So why did no major celebrities reference the acts of anti-Jewish terrorism that took place in Charlottesville this weekend?

Make no mistake, the white supremacy movement and the alt-right gathering in Charlottesville were explicit attacks against people of color and specifically black people. The event was designed as a protest against the removal of a statue of Robert E. Lee, the Confederate general who exemplifies what we often pretend is not true: that racism has long been an American value. The weekend was an explicit attack on black people. Every public figure can and should condemn this violent racism publicly.

But without taking one single thing away from Black, Brown, and queer people, why isn’t it possible for celebrities to stand up and say, “This anti-Jewish hatred is unacceptable”? Why can’t they say, “I stand with Jews everywhere”?

Celebrity remarks on Charlottesville, unsurprisingly, are largely absent of references towards race or religion. Major stars like Lady Gaga tweeted that people should “help” and “be kind,” adding, “this is not us.” Kim Kardashian sent general prayers to “those in Charlottesville & every American who is the target of hate and violence.” It should shock no one that beloved entertainers erred on the side of banal when confronted with America’s most painful problems.

But many celebrities did address targeted minority groups. They just didn’t mention Jews. Demi Lovato tweeted to her 46.9 million followers, “Black, Muslim, gay, bisexual, trans, etc. you are perfect the way you are and you ARE LOVED.” Jessica Alba Instagrammed an image and the words, “Racism and bigotry does not merely exist on the faces of the terrorists marching in Charlottesville.” (There are no male celebrities mentioned in this article because the most-followed men on Twitter who are not Barack Obama -— Justin Bieber, Justin Timberlake, Cristiano Ronaldo, and Jimmy Fallon -— said nothing about Charlottesville at all.) And many celebrities wrote stirring, necessary responses to racism. But nobody mentioned Jews.

Love. Please, I beg of the evil to let go of the prejudice and racism and to #stopthehate. #prayforCharlottesville ✌? pic.twitter.com/FkPoohkfAO

Public disavowals of anti-Semitism were hard to find on the internet this week, but there were a few. Angela Merkel, a woman who knows her history, condemned the “naked racism, anti-Semitism, and hate” on display in Charlottesville. Human rights activist Shaun King, who is known specifically for anti-racist activism, made room to mention threats against Jews in his tweets. And like it or not, one of the highest profile people who condemned hatred against Jews was the activist Linda Sarsour.

Almost more terrifying than the pretense that Jews were not directly threatened and endangered by the events in Charlottesville are the many responses to the event that implicate the Holocaust but erase the Jews. In a piece for Refinery 29, Lily Herman pointed out Olivia Wilde’s Instagram response, which encouraged support for two groups: “immigrants and African Americans.” Wilde called for the protection of “the potential victims of the alt-right.” She called the events “unvarnished Naziism.” She did everything except mention the word “Jew.” Bernie Sanders, who perhaps more than Wilde is reasonably expected to call things what they are, tweeted that the events were a “provocative effort by Neo-Nazis to foment racism and hatred and create violence.” But what about the efforts of Neo-Nazis to foment Anti Semitism? “Call it out for what it is,” Sanders tweeted, with no hint of irony. Besides, is a person wearing a swastika, doing a Nazi salute, and chanting “Jews, Jews, Jews” really a “neo” anything? What is this reticence to name things when it comes to talking about anti-Semitism?

The use of the word “Nazi” and references to the Holocaust as a comparison for, rather than an explanation for, what is happening right now is a strange trend. Many seem to see the hatred and violence gaining traction now as a new brand of Naziism -— one that targets race instead of religion. That interpretation reveals the impoverishment of our cultural understanding of the Nazis. The Nazis always targeted multiple groups. The Nazis always discriminated on the basis of race and ethnicity. Just ask African Germans. Just ask Romani people.

Why Can’t I Find One High-Profile Celebrity Who Acknowledged The Anti-Semitism In Charlottesville?