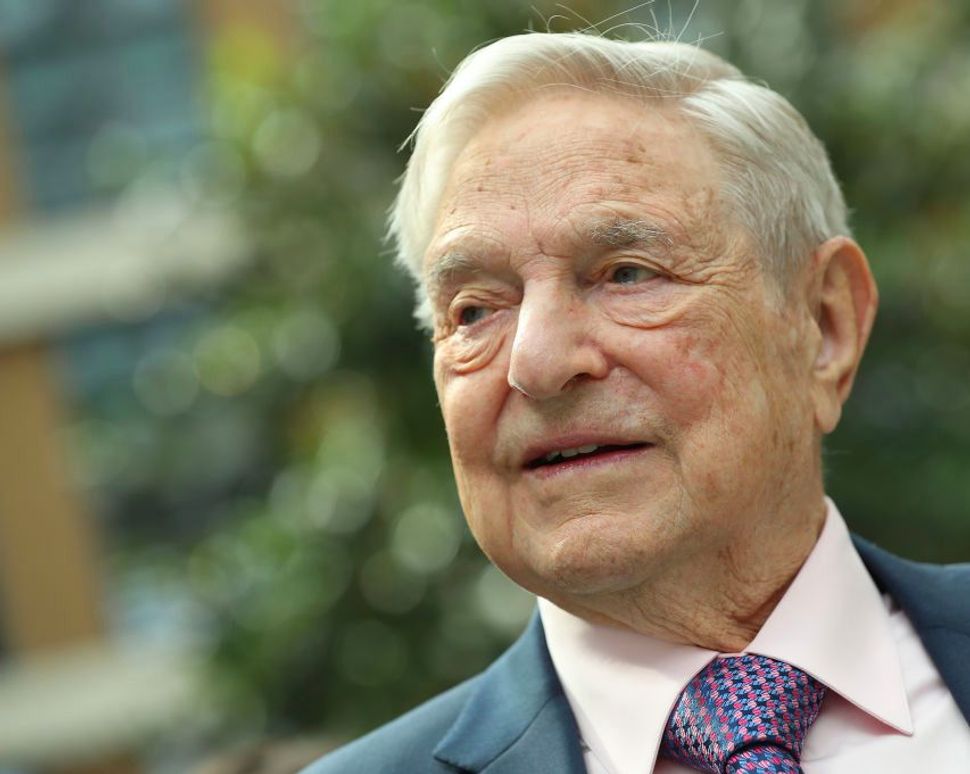 George Soros is a frequent target of conspiracy theories. Image by Getty

After a Chicago Tribune columnist published a diatribe against George Soros that invoked classic anti-Semitic conspiracy theories, the newspaper will rearrange its presentation to more clearly distinguish between opinion writing and reported news.

The Tribune’s editor-in-chief, Colin McMahon, announced on Monday that the work of columnists like John Kass, who took aim at Soros in an article on racial justice protests in Chicago, will be labeled more explicitly as opinion, and will appear further back in the newspaper’s print edition.

Robert Feder, an independent media blogger and former media columnist for the Chicago Sun-Times, reported that McMahon had planned those changes since he became editor-in-chief in March. However, they’re taking effect just days after Kass’s column incurred widespread backlash, including from Forward language columnist Aviya Kushner, and protest from the newspaper’s union.

In his July 22 column, Kass warned of an “overwhelming sense of lawlessness” growing in cities controlled by Democratic mayors. Kass attributed this phenomenon to the machinations of liberal billionaire George Soros, who he claimed is stealthily using his wealth to fund the election of “liberal social justice warriors as prosecutors,” with the ultimate goal of undermining “the justice system of urban America.”

Soros and the SJWs are here, Chicago. Columnist @John_Kass writes that with them comes an overwhelming sense of lawlessness and a reason to leave town. https://t.co/j6SYBcPAOq

Kass cited little evidence of Soros’s spending patterns aside from a $2 million donation from a political action committee he funds to the 2020 campaign of Cook County State’s Attorney Kim Foxx (The Forward reported that the 2020 State’s Attorney’s race was the most expensive ever, and that Foxx was vastly outspent by her opponent Bill Conway, the son of a billionaire.)

Soros, who has funneled his wealth into liberal and pro-democracy causes, has long been the target of conspiracy theories. Often amplified by hard right leaders and pundits, these theories draw on anti-Semitic canards, such as claims that Jews control the media or secretively influence the course of politics. In late May and June, as protests against police violence swept through American cities, claims that Soros was responsible for the demonstrations spiked online.

The Midwest chapter of the Anti-Defamation League chided the Tribune for giving “conspiracies a platform.” Chicago Alderman Matt Martin condemned the column as anti-Semitic and said that the implication that people of color lack “the agency to organize ourselves” is racist.

Shocking @John_Kass column in @chicagotribune scapegoating George Soros with charges that regularly feed antisemitic conspiracies. Violence plagues Chicago, but let’s get real. @chicagotribune has a responsibility to not give these conspiracies a platform. https://t.co/eEjgIGGVN3

The narrative that George Soros is behind these protests is just the latest manifestation of an old trope that Jews foment civil unrest and that PoC don’t have the agency to organize ourselves. It’s racist and antisemitic, and it should never have been published in the Tribune. https://t.co/mMOCrZrUbZ

Kass has acted as the newspaper’s “lead columnist,” with his columns appearing on the second page of the print edition, since 1997. Going forward, he will no longer be known by that title and his work will appear alongside other opinion writing. Kass did not respond to the Forward’s request for comment.

The Chicago Tribune Guild, the newspaper’s union, sent a letter to McMahon arguing that Kass’s work endangers the newspaper’s overall credibility. “This column from the Tribune’s lead columnist does a disservice to our entire institution,” the board members wrote. “It undermines the efforts of our newsroom to provide fair and diligent reporting to readers.” The letter demanded that Kass apologize for his “indefensible invocation of the Soros tropes.”

The proposed changes to the newspaper’s layout, which will take effect sometime this week, may address some of those concerns. “The Tribune, like a lot of news media, doesn’t do a very good job of explaining the difference between news coverage and opinion writing. That is something we’ve been working to address,” McMahon told Feder.

However, Kass has not apologized and the Chicago Tribune Guild remains unsatisfied with the newspaper’s refusal to address the content of his work.

“We welcome the move to separate John Kass’s columns from our news coverage but that doesn’t address the concerns we raised internally to managers last week,” the union tweeted on Monday. “Bigotry has no place in any of our pages.”