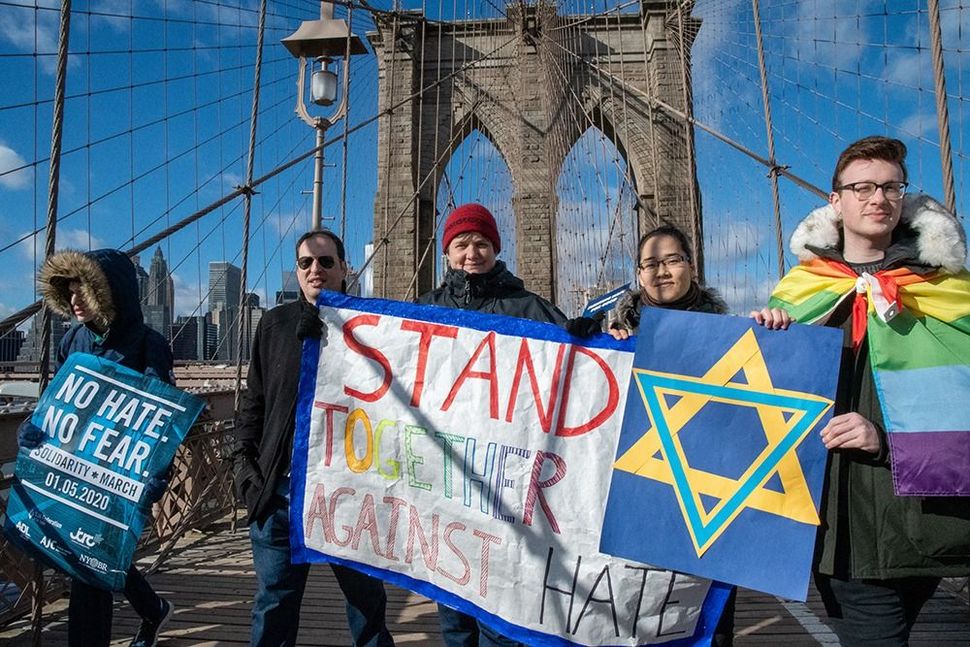 Marchers hold up a signs during the “No Hate. No Fear.” solidarity march across the Brooklyn Bridge, Sunday, Jan. 5, 2020. Image by John Kunza

The New York City Council has scrapped a $1 million initiative to prevent hate crimes from its upcoming annual budget.

Last year, the $1 million had been divided up among 15 groups, including the Anti-Defamation League, the Jewish Childrens’ Museum and the United Jewish Organization of Williamsburg, for what budget documents described as “bystander and upstander interventions, community-based reporting, counseling and peer support, community events, and educational programs.”

But this year, the largest chunk of money explicitly allocated for hate crimes prevention by the City Council is $106,250 to one organization, the Metropolitan New York Coordinating Council on Jewish Poverty.

“We were very much moving forward on this and working very hard and setting up a program,” said Devorah Halberstam, the director of external affairs at the Jewish Childrens’ Museum, one of the organizations that received the funding for 2020 but not for 2021. “Of course I’m very concerned.”

“Right now things may seem like they’re quiet, but you never know when it will rear its ugly head again,” she added.

The cuts to hate crime prevention efforts seem to reflect a change in priorities for the city government. Last year, City Hall launched the Office of Hate Crimes Prevention and and developed a public school anti-hate curriculum with the Anti-Defamation League, among other initiatives.

“It is disappointing to learn this initiative will not be included in next year’s city budget,” said an ADL spokesperson. “As incidents of hate and bias continue to deeply affect many communities within the five boroughs, this important resource could bring additional support and tools to combat hatred, bigotry and bias, especially when it comes to educating our children.”

Much of last year’s progress seems to have slowed, as a global pandemic and mass protests over police brutality have interrupted the city’s plans.

This year, a chunk of the budget for hate crimes prevention quietly slipped out the back door, as did a January promise that the NYPD would begin publicly posting hate crimes data. As of Monday, that data was still not available.

The Daily News reported in December that the hate crimes prevention office was not yet fully staffed, though a spokesperson said they have since filled all of the positions.

In January, the office established Neighborhood Safety Coalitions, groups of community leaders that were supposed to meet monthly to come up with ways to combat hate crimes. The spokesperson did not respond to questions about whether the coalitions had actually ever met, but said, “The Office remains in communication with them, and as things develop, we hope to find new ways to get them involved. Everything will depend on COVID.”

He said that other initiatives, including committee meetings made up of agencies like the Brooklyn District Attorney’s hate crime unit and the Department of Education, have continued despite the pandemic.

Let’s be absolutely clear about what @NYCSpeakerCoJo + @NYCCouncil are doing with their proposed budget: Cutting funding from the effective Hate Violence Prevention Initiative while deceitfully protecting NYPD funding is stealing from + harming NYC’s communities to pay for cops.

“New York City cannot claim to be the progressive city that it is and gut programs like the Hate Violence Prevention Initiative,” said Audrey Sasson, executive director of Jews for Racial and Economic Justice, one of the original groups pushing for city funding for the initiative. “It’s a shanda.”

Update, July 28, 9:25 a.m.: This story has been updated to include responses from a spokesperson for the Office for the Prevention of Hate Crimes.