“Every minute that you listen to them will destroy your soul … they are infidels, they spread heresy,” says Rabbi Yosef Mizrachi in the video, as the names appear on the screen. Mizrachi then goes on to cite the “law of the inciter,” which states that someone who persuades another to worship idolatry must be put to death. 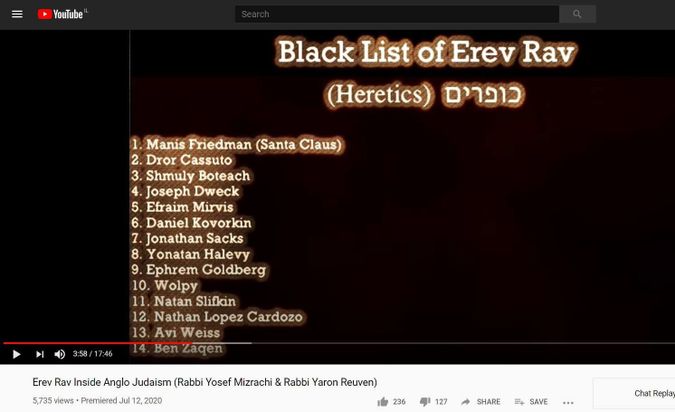 Rabbis listed in the Mizrachi-Reuven video Image by YouTube Screenshot

Originally posted to Facebook and YouTube, and created by Mizrachi’s disciple Rabbi Yaron Reuven, the video was removed after Orthodox viewers flagged it as a death threat to the rabbis named. Now some Orthodox Jews have gotten a high-profile religious website — Torah Anytime — to eject one of them, and are ramping up a campaign to remove the other, as well. The discussions are largely taking place in private groups on Facebook and WhatsApp, where rabbis, rebbetzins and educators discuss their concerns over the violent nature of the content, and the possibility that the two rabbis are developing a cult-like following.

“The idea of Orthodox Judaism developing a violent, apocalyptic cult is troubling,” wrote Rabbi Natan Slifkin, one of the names on the list, in a blog post.

Neither Mizrachi nor Reuven could be reached for comment.

Torah Anytime did not carry this exact video, which got more than 10,000 views on YouTube, wrote Yoel Matveyev in the Forverts. It has, however, hosted content from Mizrachi and Reuven, who collaborated on this video and others. They’ve already deleted Reuven’s videos.

An online library of more than 70,000 videos, which garners 300,000 monthly visits, the site had given the duo’s lectures a stamp of approval by featuring them alongside popular Orthodox speakers like Charlie Harary, Rabbi Paysach Krohn, Rabbi Shlomo Amar and the late Rebbetzin Esther Jungreis. The site’s funding comes from a group of private donors and foundations, in addition to the Orthodox Union; the site has emerged as a leading video platform in the Orthodox community, filming the Agudath Israel convention in 2019.

For at least four years, critics of Mizrachi and Reuven have asked the site’s founders, Shimon and Rubin Kolyakov, to kick them off the platform, said to one of their critics, who spoke on condition of anonymity. After the appearance of the “inciter” video on July 15, Reuven’s content disappeared from the Torah Anytime site— but some 1,700 videos attributed to Mizrachi remain.

Mizrachi and Reuven come from a different tradition from most of the spiritual leaders on Torah Anytime, who are often graduates of known seminaries or have institutional affiliations. In contrast, Mizrachi and Reuven do not have the same scholarly credentials, and are not focused on Jewish law; instead, they are part of the “folk preacher” class, as described by Professor Nissim Leon, a sociologist of religion at Bar Ilan University in Israel, who focuses on the practices of Mizrahi Jews, whose roots are in the Arab world. Mizrachi and Reuven state that their mission is to help other people become more religious, like other rabbis, but they emerge “from among the people, not from the yeshiva world.” Their videos evoke a religious genre that became popular in Israel in the 1990’s, promulgated by the Orthodox Shas political party, which famously used audio cassettes to spread its religious ideology.

The Israeli-born Mizrachi, 52, worked in finance, for example, and then decided to dedicate his life to helping others find Judaism, according to his website. In 1995, he started distributing free DVD’s and CD’s with his lectures, and in 2004, started posting videos online. Mizrachi is known for theories that disregard science and history: He has stated that coronavirus can be treated with a blow-dryer, for example; that women contract cancer because of promiscuity and that fewer than 1 million halachic Jews died in the Holocaust.

He has a following of more than 70,000 on YouTube and Facebook combined; they say that his lectures inspire them to become religious: “You are the one rabbi that was able to make me religious,” wrote a commenter named Sigalit. Another, named Moshe, wrote: “Thank you so much for the strengthening lectures, and of course most importantly, the amazing rebuke.”

The Israeli Torah site Hidabroot described Mizrachi as having a “magical secret,” an ability to reach people of all backgrounds. A profile of him states that “priests, Hamas members and al-Qaeda all listen to the lectures of the rabbi, who is not afraid to tell the truth out loud.”

Beth Sarafraz, a Brooklyn-based writer and Mizrachi fan, wrote in the Jewish Press that he is “telling people the whole truth no matter how harsh it might be.” “Liberal Jews,” she went on, “accuse him of being ‘politically incorrect’ even though he is only quoting the Torah and other holy scriptures.”

Indeed, the Kolyakov brothers who founded the site became Orthodox because of Mizrachi — and are “afraid” to remove his content, out of fear of retribution from him, said a person who is trying to get them to take his videos down, in addition to Reuven’s. The Kolyakovs did not respond to the Forward’s request for comment.

Reuven, also an Israeli-born former-businessman, produces videos as well, and has an online following of roughly 25,000, between Facebook and YouTube. According to a video in which Reuven tells his life story, after facing business problems and struggling with a penchant for gambling, he was inspired by Mizrachi’s videos. He became religious, growing a long beard and donning a black hat. He started an organization, BeEzrat Hashem Inc., to “learn & teach Torah through lectures to save Souls,” according to his Facebook profile, and began posting video lectures that have a similar style to Mizrachi’s, with a focus on the sin of “wasting seed” and women’s modesty, and stating that the Jews were responsible for the decline of Germany, for example.

Both Mizrachi and Reuven point to endorsements from Rabbi Eliyahu Ben Haim, who is a prominent rabbinical judge and a rosh yeshiva at Yeshiva University, bastion of modern Orthodoxy.

Yet they have more critics than supporters in that sphere.

In 2016, a group of prominent Orthodox rabbis signed a letter stating that Mizrachi “reduce[s] complex issues to simplistic and misleading sound bites,” and his assertions are “dangerous.”

Now the video about the infidels has heightened those concerns yet again — especially because of the named list of rabbis.

“Mizrachi is superficial at best and at worst sows seeds of sinat chinam,” said Rabbi Yosef Benarroch of Winnipeg, referring to baseless hatred. “His words have no basis and how sad to be hearing these words just days before Tisha B’Av. I am saddened to see this video filled with hatred and intolerance.” Tisha B’Av is a day of ritual mourning that takes place this year on Thursday.

“We need to protest this hateful, potentially violence-inciting rhetoric,” said Slifkin, one of the rabbis threatened by the video. “And we need to do it now, before it spreads any further.”