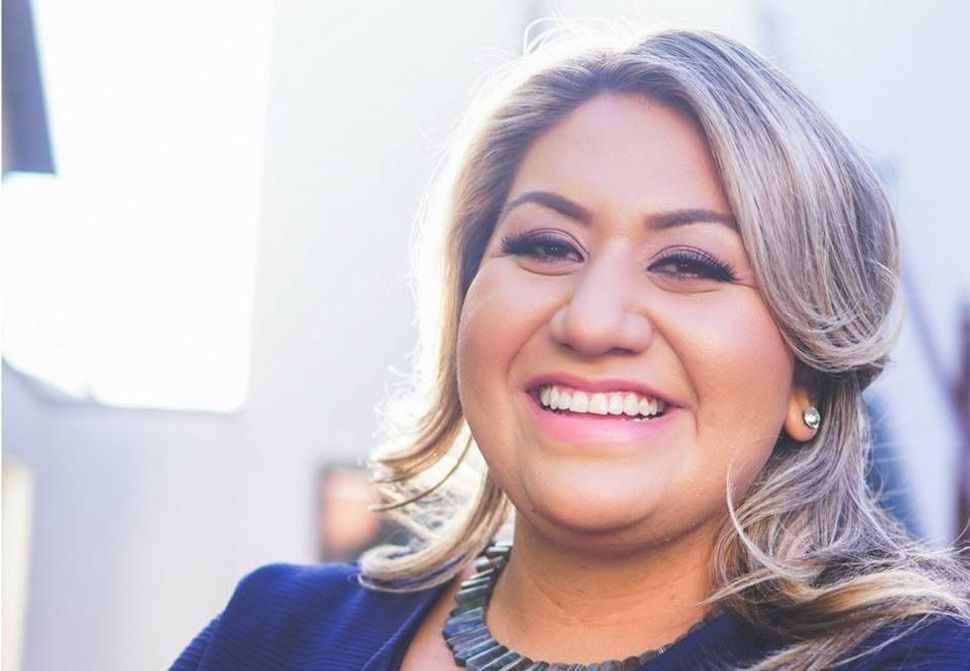 Of the 600 laws passed by the Arizona governor in the past two years, only six came from Democrats, said Democrat State Rep. Alma Hernandez. That means the odds are against her — the youngest lawmaker in the state, and a Mexican-American Jew — getting any bills through.

Yet her track record in the 2018 legislative session, her first, shows that she might actually do it. She just has to get re-elected on Aug. 4.

Hernandez, 25, is running in a three-way Democratic primary race between her, fellow incumbent State Rep. Andres Cano and Javier Soto to represent the third state House district, which includes the western part of Tucson. It’s a “jungle primary,” which means the two candidates who get the higher number of votes will win the nomination, and probably the election. The Republican party has canceled its primary. Hernandez raised three times as much money as Cano, and 10 times as much as Soto.

In an interview, Hernandez talked about the challenges and highlights of the past session, what she hopes to achieve in the coming session and how her personal history shapes her priorities as a legislator.

An anti-Semitism bill: The Arizona State House of Representatives has already passed two of her bills — one mandating Holocaust education, and the other more precise tracking of anti-Semitic hate crime.

“Being able to bring Holocaust survivors to the capital to testify on behalf of my bill was very emotional,” she said.

The Senate’s education committee also already approved the Holocaust bill, which bodes well for its passage there, too.

Anti-Semitism on the floor? Hernandez has a master’s in public health and says the subject is her passion. She sponsored a bill to remove religious exemptions from vaccination requirements and received blowback tinged with Jew hatred. A colleague did a poll on Facebook comparing mandatory vaccinations to Holocaust tattoos, she said. She demanded an apology from that member on behalf of Holocaust survivors and victims, and eventually got it.

“I reintroduced the bill and plan on reintroducing it next year, and will do until I get it done. As a public health professional, it’s my duty to make sure children in my district are safe,” she said.

Money in the budget When Hernandez was 14, she got attacked by a school security officer after a fight and suffered spinal damage, she said. That experience is something she talks about often, and it became even more relevant during the national conversation about reforming law enforcement after the police killing in Minneapolis of the unarmed George Floyd.

Hernandez pursued her policy goals through the budget and got $1 million earmarked to train school officers in how to recognize their own bias and de-escalate conflicts.

“I hate to relive that incident, but I share it with people in power,,” she said. “I’m not asking to defund the police, but I’m asking that they are trained to work with adolescents and children.”

Clinton and Biden Hernandez was a passionate Hillary Clinton supporter and is still disheartened by the outcome of that election, but she’s now eager to help the Biden campaign — as soon as her own race is over, she said. She’ll serve as a Biden delegate at the national convention, and

“It’s important for people who look like me to be a part of these conversations,” she said.

COVID and campaigning “It’s very hard to campaign,” she said. “It’s not the same, but the work has to continue.”

The pandemic is spiking in Arizona, which means no in-person campaigning of any kind. Hernandez goes out masked, early in the morning, and leaves literature on doorsteps.

Act local Hernandez knows the presidential race and statewide contests are crucial, but has also made it her mission to remind people of the importance of local government: “What makes a community and a state fail or thrive, it’s who your local legislators are. We are the ones who decide funding for education. We decide funding for health care.”

Indeed, she blames the legislature, not the governor, for how the coronavirus pandemic has played out in Arizona. The legislature could just call a special session and vote for more money for testing, she pointed out.