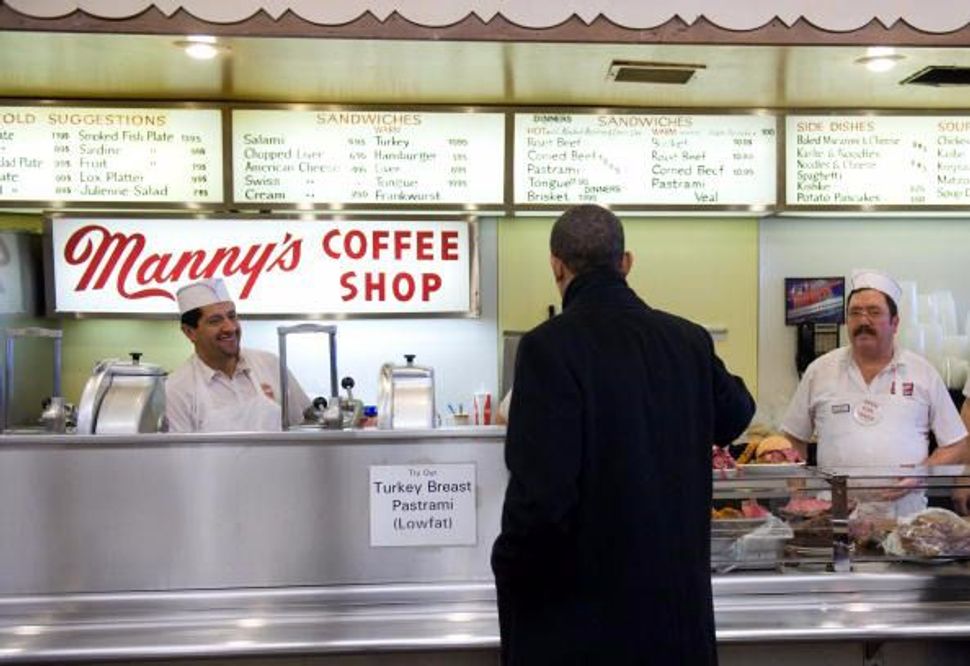 Meal Fit For a President: Barack Obama steps up to the counter at Manny’s. Image by Getty Images

David Axelrod has a clear memory of the roasted turkey leg he received in a care package at the White House.

A friend had shipped it to Axelrod, then senior advisor to President Barack Obama. He figured Axelrod missed the Wednesday Turkey Leg special offered by Manny’s Deli in Chicago, the city that forged Axelrod’s and Obama’s political destinies.

President Obama walked in to find Axelrod digging into the hometown treat. “What is this?” Obama said. “King Arthur’s court? What’s going on here?”

These days, Axelrod is taking his nostalgia for Manny’s public, trying to drum up support and customers for an institution hit hard by the COVID-19 pandemic. 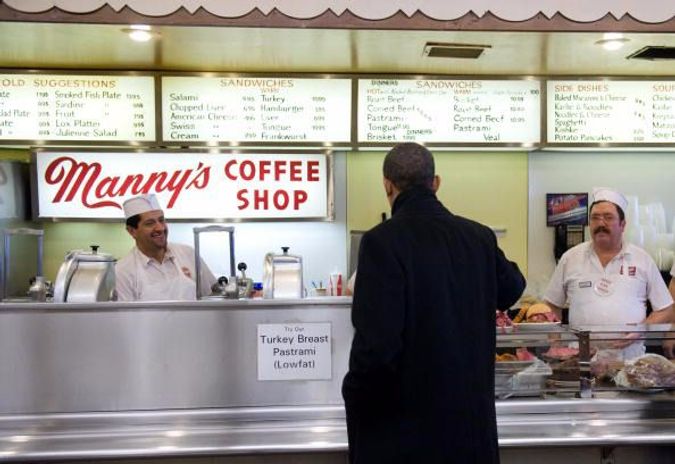 Meal Fit For a President: Barack Obama steps up to the counter at Manny's. Image by Getty Images

Pre-pandemic, Manny’s business was approximately 80% dine-in, 20% takeout. The pandemic obliterated dine-in overnight. So far, the deli has managed to survive by making daily deliveries to pickup locations in the suburbs, and gradually opening the restaurant to a limited amount of customers. Its retail corned beef line at Midwest Costcos remains successful. But Raskin worries that these measures might not be enough to keep the restaurant afloat.

Across the country, more than 12,000 restaurants have permanently closed due to mounting costs, lack of revenue, and an uncertain future that has frightened off investors. The website Eater Chicago keeps a running list of permanent restaurant closures in the city. No place is immune.

So, when Manny’s Deli recently launched a social media campaign to drum up customer orders amidst their coronavirus-induced financial downturn, Axelrod was quick to publicly express his support on Twitter.

“Manny’s is a Chicago institution,” he tweeted, “I’ve been going there for forty years to clog my arteries and clear my head! If you’re looking for a great deli in and around Chicago, give ‘em a try! Food is delicious!!”

Turkey leg size aside, the location of Manny’s, 1141 S. Jefferson Street, helps explain part of its appeal to Chicago political mavens including Axelrod, Obama himself, and former Mayor (after a turn as White House Chief of Staff) Rahm Emanuel.

Manny’s sits just a stone’s throw from the heart of downtown Chicago’s skyscrapers and hulking municipal buildings, but also straddles the divide between the North Side and South Side that defines what remains a changing but arguably still-segregated urban landscape. 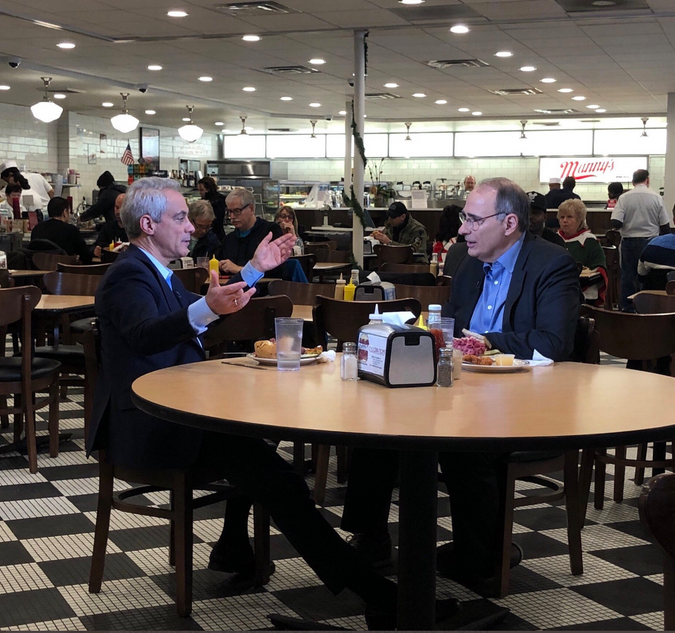 Far from a no-man’s-land, this dividing line was once home to a notable Chicago institution: the vibrant outdoor-indoor bazaar known as the Maxwell Street Market. This is the place in The Blues Brothers where John Lee Hooker performs to a throng of onlookers, and the place that gave its name to Chicago’s topping-stuffed all-beef Maxwell Polish sausage.

It was a mercantile reef of largely and historically Jewish-owned businesses and stores that, in addition to its Ashkenazic immigrant vendors, long served as a melting pot of Black, white, Latinx, Caribbean, and Asian customers. The general commercial zone of Roosevelt Road was colloquially and controversially known as “Jew-town” to many Chicago citizen-patrons.

The Maxwell Street Market is gone, but Manny’s, founded nearby in 1942, remains at the nexus of the city’s politicos, journalists, moguls and workaday everybodies. With the majority of Chicago’s Jewish deli food now located in the suburbs or the far-North Rogers Park, Manny’s is one of the last remaining eateries of its kind within Chicago.

“I was introduced to Manny’s by a fellow reporter when I started at The Chicago Tribune in 1976, and we used to go there two or three times a week,” Axelrod said. “It was a quick trip from the Tribune on Lower Wacker to Manny’s. That was in the days when I could knock off a bowl of matzah ball soup and a corned beef sandwich with no feeling of heaviness. It’s a little tougher these days. I’ve been going there ever since, so, 44 years.”

Axelrod discovered Manny’s after he spent his formative deli years in New York’s Stuyvesant Town neighborhood. He recalls meals at Katz’s on the Lower East Side, the late and lamented Stage Deli, and Jersey City’s Greenspan’s.

“I remember Greenspan’s really well because my mother had like 16 aunts and uncles, some ridiculous number, so there were a fair number of funerals growing up,” he said. “At the shiva, there was always a deli plate from Greenspan’s. It was only years later that I learned that tongue was actually a tongue.”

Having been raised on a steady diet of notable New York delis, for Axelrod it was “such a revelation to find Manny’s, because there aren’t that many great delis in Chicago.”

Manny’s was a place where Axelrod could sit and get some work done, and also meet other politicians to talk shop.

“There were plenty of days when I’d just call people up and say, ‘I need to think something through, let’s meet at Manny’s,” Axelrod said. “It was like a clubhouse.”

“Often they want to straighten me out, or give me what they believe are their truer insights about politics,” he said. “But, it’s all good, it’s fun. And, it’s a great place to commune with people.”

Up until the pandemic, Manny’s remained a gathering place for a wide array of Chicagoans, with Jewish food the hearty and comforting medium.

“We’re a Jewish deli where the majority of our customers aren’t Jewish,” said Dan Raskin, Manny’s current and fourth-generation owner-operator.

That diverse spectrum of Chicago’s population made Manny’s a worthwhile campaign stop.

“You have a great cross-section of people from all walks of life, all different communities,” said Axelrod. “They all gather at Manny’s. There are a lot of tables and a lot of hands to shake.”

Axelrod is hopeful he’ll be able to return to his favorite table. Raskin, too, misses his regular customers and seeing family and friends gathering around his tables for comfort food and conversation.

“The most important thing is the staff,” said Raskin. “It’s just important to be able to keep our staff employed, and to feed their families.”