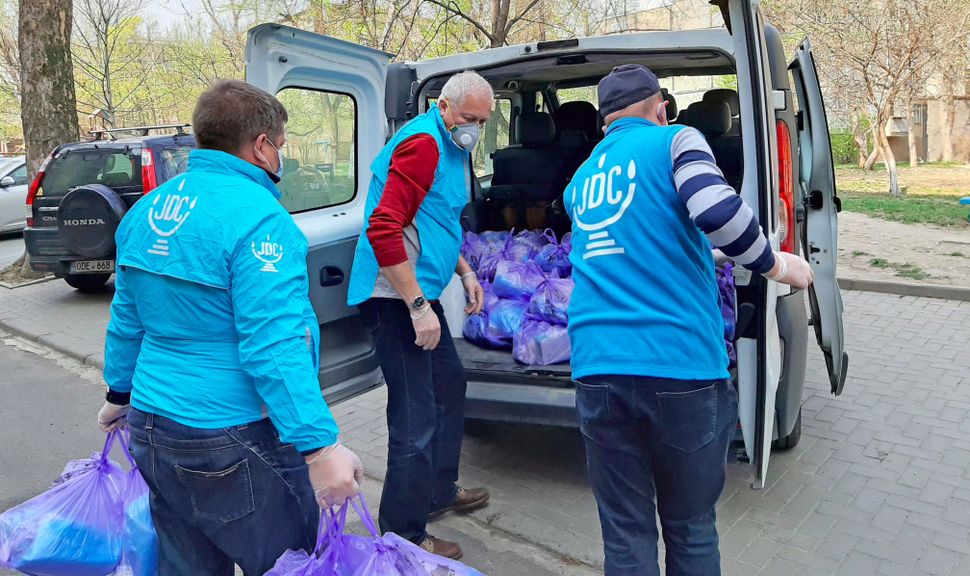 JDC volunteers make a delivery in Kishinev, Moldova. Image by Courtesy of the JDC

Just about a year ago, an open letter on a website that covers Jewish non-profits outlined the plight of women who build careers in the Jewish world only to find themselves sidelined when it comes to assuming leadership roles. Signed by over 500 female Jewish professionals, the letter pinpointed an urgent problem and provided a long list of solutions.

On the letter’s anniversary, many in the Jewish nonprofit world are debating whether public criticism that dashed a female staffer’s chances of becoming CEO of a major Jewish organization was rooted in sexism.

On Saturday, a female candidate for CEO of the American Jewish Joint Distribution Committee withdrew herself from consideration after current and former members of the organization cast doubt on her credentials and accused her of benefitting from favoritism in a Jerusalem Post article. The JDC disputed key parts of the report. Now, some say the controversy — and its effect on the candidate, Sarah Eisenman — smack of sexism, and could have a chilling effect on other women who aspire to lead in the Jewish world.

“In any organization, a current board member bashing a current employee and going public to try to make it so they can’t advance, crosses every single line around safety, respect and equity,” said Sheila Katz, the CEO of the National Council of Jewish Women.

Established in 1914 to assist Jews in need outside the United States, the JDC now has a $330 million budget and supports disadvantaged Jewish communities around the world, particularly in post-Soviet states. It facilitated the emigration of Soviet Jews and played a major role in Operation Solomon, which airlifted thousands of Ethiopian Jews to Israel in 1991. In 2008, the organization established Entwine to recruit the next generation of JDC leaders and donors. Entwine — with a budget of $5.7 million — cultivates young volunteers by offering overseas volunteer opportunities, service-based travel and leadership programs.

Like many legacy Jewish charities, including the Anti-Defamation League, HIAS, and the UJA Federation of New York, the JDC has never had a female CEO.

Jewish organizations have long struggled to promote women to leadership positions — even when the majority of their employees are female. A 2018 survey by Jewish leadership organization Leading Edge found that while women make up 70% of employees of Jewish nonprofits, they make up only 30% of CEOs.

On August 4, the Jerusalem Post published a lengthy report on the JDC’s CEO search process which alleged, based on anonymous interviews with board members and members of the search committee, that the organization’s president, Mark Sisisky, had improperly interfered with the process in order to promote his preferred candidate, Eisenman, a senior JDC staffer who has worked for the organization for 18 years and who runs Entwine. Members of the JDC cited Sisisky’s decision to add members to an original search committee established before his tenure, and ultimately to form a new committee altogether, as evidence of favoritism, noting that many of the new members had connections to Entwine.

In the report, JDC members said that Eisenman, whose candidacy had previously been confidential, did not have enough managerial experience to lead the organization. One anonymous source argued that she “did not have the right experience or the standing in the Jewish community in its greater context.”

Katz took issue with the Jerusalem Post’s decision to print derogatory comments about Eisenman without including a discussion of her resume.

“For them to run a hit piece and really only talk about negatives and not mention any of [her] credentials, that’s an example of the misogyny and sexism we see,” she said. “People think it’s OK to refer to women only by whether someone considers them likable or not.”

The JDC disputed the characterization of its search process as biased. In an email, a spokesperson said that Sisisky’s choices to expand and reform the committee were permitted by the organization’s bylaws.

Further, the spokesperson said, there was nothing unusual about the fact that members of the search committee had connections to Entwine. In the past, the JDC has usually drawn CEOs from the senior ranks of its own staffers, who “naturally had long-standing professional relationships” with search committee members.

“We strongly condemn any public attacks on candidates for positions at JDC, especially those that could be directed at protected groups like women,” the spokesperson continued.

Shortly after the publication of the Jerusalem Post report, Eisenman withdrew her name from consideration, citing the public scrutiny she’d faced during what was intended to be a confidential process.

“I was always prepared to have my candidacy reviewed, questioned, and potentially rejected through a fair Board process, but I don’t believe any candidate for a job should be subjected to public attacks while the process is underway,” she wrote in a letter to the search committee which was shared with the Forward.

Dan Brown, the founder of eJewish Philanthropy, a website that covers the Jewish nonprofit sector, called the report “a hit job on a rising communal pro” in a post on the site. While dissent among organization boards is to be expected, he argued the personal attacks levied against Eisenman by JDC members are indicative of bias against women and minorities in Jewish organizations.

“Our younger professionals, especially women, Jews of Color, and single parents […] are often not treated the same as their white male colleagues,” Brown wrote.

While criticism of Eisenman did not mention her gender, women can face implicit bias even when explicit sexism is not evident, said Karla Goldman, a professor of Judaic Studies and Social Work at the University of Michigan.

“There’s all kinds of gendered clues and language,” Goldman said of the accusations voiced in the Jerusalem Post report. She was particularly struck by board members’ concern that the CEO job description, which stated that ideal candidates would focus on inclusivity and attracting younger donors, was tailored to Eisenman, whose work at Entwine involved recruiting the next generation of JDC volunteers.

“It’s really astonishing, that these things we’ve come to think of as standard operating procedure would be seen as affirmative action towards her as opposed to something you’d expect of any candidate,” Goldman said.

Goldman noted that the controversy at the JDC came after top jobs at multiple legacy Jewish organizations, including Hillel International and Hebrew Union College, which many expected would go to women, were instead filled by men.

The JDC plans to continue reviewing candidates for the CEO position. But Katz said that whether or not the suspicion of Eisenman’s candidacy was rooted in sexism, the incident could have broader ramifications in the Jewish nonprofit world.

“If this goes without any more comment or conversation, that sends a message that as a Jewish community we tolerate harassment,” she said.