Last March, Liron Samara, an Israeli-born psychotherapist living in Los Angeles, read an article about an elderly woman who couldn’t find toilet paper at the store. It was shortly after the coronavirus pandemic had turned toilet paper into a rare and valuable commodity.

Samara had just lost her 89-year-old grandmother in February, and she wanted to honor her memory by taking action.

“This was my opportunity to do something and give back,” she said.

She posted a message on Instagram offering to help to anyone in need because of the pandemic-mandated quarantine.

A Chabad rabbi messaged her, asking her to buy toilet paper for an elderly man. Soon after, several organizations asked her to provide warm meals, clothes and toilet paper to elderly clients.

The response prompted Samara and her younger sister Bar Gabay to start a Facebook page: People Help People. To their delight, many people started offering their help. 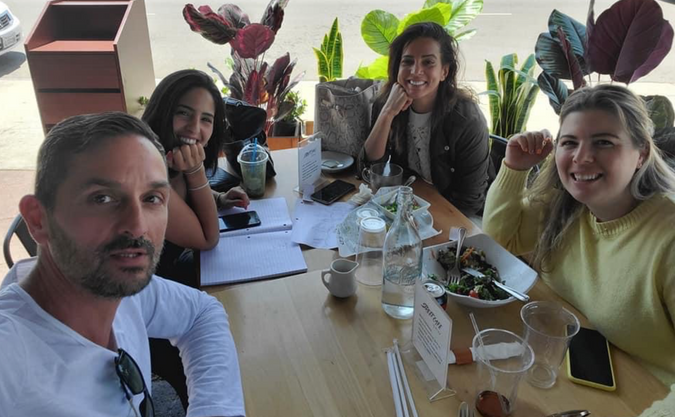 “During the first few months, I used to make lists which took me hours. I used to post: ‘An old man in Sherman Oaks needs warm meals every Friday’ and then I would match him with a volunteer,” Samara said.

After her list grew to 42 families in need, she decided to ask volunteers to adopt one elder or a family, or for a few volunteers to do rotations.

Volunteers now seamlessly help others with cooking at home, sending warm meals, clothes, cleaning products, and other items each week.

“There are people who have no family here and are quite lonely,” she said.

Samara has already amassed a slew of gut-wrenching stories that reveal the burdens the pandemic has placed on the lives of people who were already in precarious circumstances. There was the father with heart problems and his daughter who suffers from a lung disease who live separately and can’t visit each other. People Help People volunteers visit both of them and bring warm meals. There was an 81-year-old woman who called to say she had broken her leg and couldn’t go anywhere. People Help People matched the woman with young volunteers who visit her on a weekly basis.

“She just wanted someone to visit her,” said Samara.

Samara, a mother of a one-year-old, has lived in Los Angeles for 17 years and specializes in marriage and family therapy.

It delighted her to find out that despite the financial hardship that many people are facing, they were still willing to volunteer.

It turns out, in Los Angeles’ large Israeli Jewish community, there were more than she knew. After she started her Facebook group, she heard about another L.A. Israeli, Shay Ben Zvi, who had started a similar group, “Israelis helping Israelis in time of need.”

The two joined forces. They celebrated birthdays with children in the foster care system who otherwise would have celebrated alone. On Passover, volunteers from both groups provided four days of warm meals. Others donated money that was used to buy food to donate from struggling local restaurants.

Other donations poured in. Galit Peled from Mamanet, an all-mothers sports team, recruited women to cook. Chen Marciano from Little Happy Moments sent the kids personalized yarmulkes with their names, coloring books, and for their parents, runners for Passover. She plans to donate more for Rosh Hashanah.

Samara said the long list of volunteers and businesses that came together in the shadow of COVID-19 will likely continue to meet communal needs after the pandemic is over.

“This is not a temporary thing,” she said. “We are trying to create a community of people who help each other. I’m feeling that my grandma, a Holocaust survivor, had sent me a message to help others, like she’s saying, ‘Do as I taught you’. I’m happy that along the way, many others had joined me.”