Some of L.A.’s Orthodox day schools set to reopen—as ‘camps’

With Los Angeles County banning even private schools from opening because of the coronavirus pandemic biting into the fall semester, at least four Orthodox day schools in the area have found a way to legally bring students to campus.

They are calling it camp.

The schools have opened or plan to open soon for optional in-person activities. Two of the four schools are billing operations that look a lot like school classes as day camps, while two others are delaying the start of the school and doing camp instead, choosing socialization over a full academic slate.

“Our children need to be part of a social structure,” wrote Rabbi Aharon Wilk, head of school of Gindi Maimonides Academy, introducing “Camp Maimo” to families in an email August 9. “Our children deserve a Makom Torah [a place of Torah] and a place where they can be healthy, happy, loved and loving.”

The non-Orthodox Jewish day schools in the area, such as Pressman Academy and Valley Beth Shalom, which are Conservative, plan to begin the school year with distance learning only.

Dr. Gil Graff, the executive director of Builders of Jewish Education, which accredits Jewish schools in the LA area, said that while he hoped that “as a baseline” the schools were acting legally, that there was an extent to which even schools operating under the law could be doing something morally wrong.

“Our public health guidelines have been established because every single school entity is not a universe unto itself — it’s part of a larger tapestry of the community,” Graff said. “I hope that every school board that has determined to operate camps of varying lengths of time gave full consideration to those issues.”

The state ban on schools reopening, which was issued July 17 and extends to private schools, included a provision by which elementary schools could apply for waivers. But on August 4, the county announced it will not be granting any waiver requests until cases decrease to below 200 cases per 100,000 in a 14-day period.

Children who are infected with coronavirus, while less likely to develop symptoms, remain capable of transmitting the disease. Only the extent to which children spread the disease is murky.

The move contrasts with earlier approaches by Orthodox leadership during the pandemic. In mid-March, a joint decision by synagogues to shut down may have spared the religiously observant community widespread losses that hit Orthodox enclaves of New York and New Jersey.

Activities and protocols outlined for the camps vary, and often look a lot like school.

For example, at Harkham Hillel Hebrew Academy, a day school in Beverly Hills operating as Camp Kesher, the school uniform will not be required. But a day at Camp Kesher looks largely like a school day, with Judaic studies sessions interspersed with “Supervised Day Care” — described in an email to parents as “allotted time to work on their general studies schoolwork together with their teacher in a distanced learning fashion.” Most periods will be available on Zoom for enrolled students who stay home. 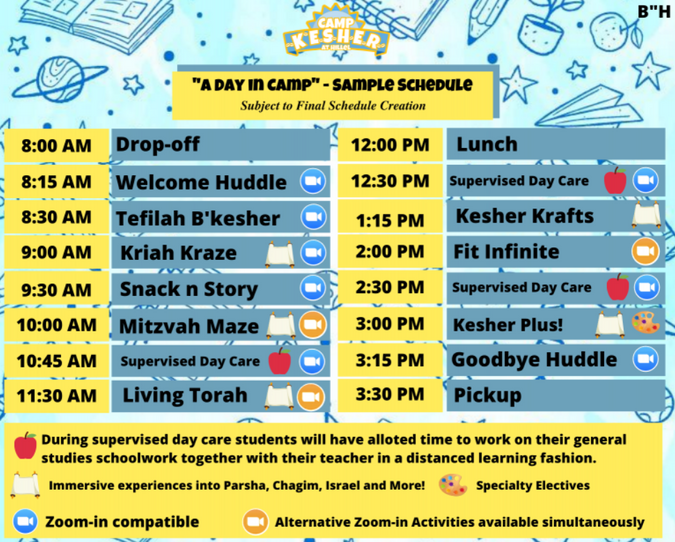 At Harkham Hillel Hebrew Academy, a day school in Beverly Hills operating as Camp Kesher, a day looks largely like a school day.

Moreover, Camp Kesher will cost $5,000 per month for families who have not already paid school tuition. For families already enrolled in the school, Camp Kesher costs 10 dollars extra.

Rabbi Y. Boruch Sufrin, Hillel’s head of school, declined to discuss the program with The Forward.

At Maimonides, which is now calling itself “Camp Maimo – Adventures in Learning,” campers will only receive Judaic studies instruction in person, and will take general studies classes at home via Zoom the other half of the school day.

While Hillel and Maimonides have introduced new camps with no clear end date, Yavneh Hebrew Academy and Emek Hebrew Academy are extending their existing summer camps by a few weeks and plan to begin the school year remotely in mid-September should the county ban remain in place.

Days at Camp Yavneh, which began Monday on the Hancock Park campus of Yavneh Hebrew Academy, begin at 7:45 AM and end at 4:30 PM, according to a list of FAQs posted on its website — roughly the same hours as during a pre-pandemic school year. The session ends September 17.

Rabbi Shlomo Einhorn, Yavneh’s dean, said in an email to The Forward that the camp’s purpose was “to bring solace and some form of opportunity to families during difficult times for the next few weeks.” He declined to answer questions.

A Yavneh parent who wished to remain anonymous because they feared repercussions from the school said that most teachers were present at the camp, and that some time would be dedicated to familiarizing kids with school-issued Chromebooks in advance of the academic year.

“I definitely think the goal of the month is to be able to provide an education,” the parent said. “You can have a science camp, you can have an English composition camp. So this is basically like a learning camp.”

But there are also theme days and dress-up days planned, and the parent said their child, who normally hates school, was thriving in the social environment after months stuck in the house.

The government-mandated business closures during the pandemic have been challenging for the Orthodox community, for whom a quorum of 10 men is essential to ritual observance. But Orthodox leadership has generally hewn to the tenet that preserving human life surpasses almost all ritual obligations. Even technically compliant outdoor gatherings were prohibited at the height of the pandemic because they created poor optics.

Perhaps wary of that concern, the schools are touting HVAC upgrades, bathroom modifications, and other precautions they will be taking to reduce the likelihood of an outbreak. Emek’s safety measures include daily temperature checks at drop off, mandatory masks at all non-eating times, and six feet of distance between classroom furniture “to the extent feasible.”

Emek’s head of school, Rabbi Mordechai Shifrin, could not specify what made Emek’s camp safer than it would be as a school. But he was happy to have the camp option available, even if it meant students were only receiving about an hour each of Judaic and general studies during the camp day. He cited recent statements by the CDC and the American Academy of Pediatrics reinforcing the urgency of a safe return to school.

“Anybody that has children of school age has seen the damaging effect of keeping the kids at home, whether it’s the social, emotional, or spiritual even,” Shifrin said. “If there’s a way to get the kids out, I thought it was important that we should.”

The county has not claimed that camps pose a smaller public health risk than schools, and why only the former are allowed seems mostly a matter of timing and relative authority.

Vanessa Martinez, a spokesperson for the Los Angeles County Department of Public Health, said that when the county had permitted camps to open in June, case rates and community transmission levels were much lower than they were in mid-July, when the state issued school guidance. The decision not to allow waivers heeded a state recommendation for counties with high case counts.

Martinez said that the county was aware of private schools that were operating as camps, and did not object as long as they observed public health guidelines.

It was not clear how the county would view Ohr Eliyahu Academy, which announced in an email to parents August 16 that it would reopen with a full course load for students on September 1. The email did not mention camp, except to say that its reopening plan was “gleaned from the two months of successful and safe camp operation that took place on our campus.”

“In our current situation, and always, it is not possible to please everyone,” Goldberg wrote. “Therefore, I have decided upon a path that is aligned with our mission, is Torah-true, follows the mandate of our Torah leadership, and is based upon the best medical advice we can find from local, apolitical experts who know medicine and our Yeshiva.”

Since coronavirus cases spiked in Los Angeles during the first week of August, the county has seen a decline in both new infections and hospitalizations. According to numbers posted August 18 to the tracker maintained by the City of Los Angeles, the seven-day average of new cases had decreased from the prior week’s by 29.9% in the city and 23.6% in the county. The case rate in Los Angeles is 274 per 100,000 as of August 19.

Even with cases on the decline, one parent with a child at Maimonides said they were uncomfortable sending them to Camp Maimo.

“I think [the schools] have their hearts and their minds and the ideas in the right place. I don’t question that,” the Maimonides parent said. “It’s the variety of opinions of how to deal with [the virus] going into the building that I question.”

The Yavneh parent, on the other hand, said the decision to take their kids to camp was made easier by the abundance of temperature checks, surveys, and other precautions that were visible even at drop-off.

“I was a little nervous the first day,” the Yavneh parent said, “but then when you see that everyone’s being as careful as they can, you have to live at a certain point, you know?”

Some of L.A.’s Orthodox day schools set to reopen—as ‘camps’