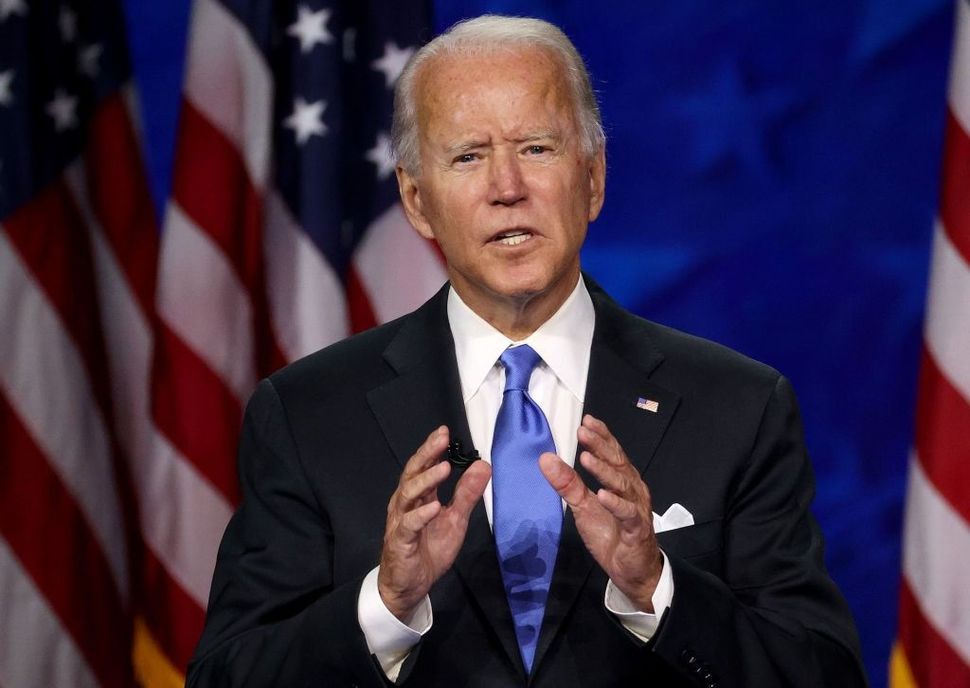 Democratic presidential nominee Joe Biden delivers his acceptance speech on the fourth night of the Democratic National Convention from the Chase Center on August 20, 2020 in Wilmington, Delaware. Image by Win McNamee/Getty Images

WASHINGTON (JTA) — Joe Biden closed the Democratic National Convention the way he launched his campaign in April of last year: By invoking what he depicted as President Donald Trump’s callousness to racism and anti-Semitism.

Biden, speaking late Thursday night to the convention made virtual because of the coronavirus pandemic, recalled the deadly 2017 neo-Nazi march in Charlottesville, Virginia.

“Remember seeing those neo-Nazis and Klansmen and white supremacists come in in a field with lighted torches veins bulging spewing the same anti-Semitic bile heard across Europe in the 30s,” he said to viewers. “Remember what the president said when asked, he said there were quote, very fine people on both sides. It was a wake-up call for us as a country. And for me, a call to action. At that moment I knew I’d have to run.”

Trump, speaking in 2017 days after one of the neo-Nazi marchers killed one counterprotester and wounded others by driving his car into a group of people, said there were “very fine people” in both opposing camps of the rally. In the same remarks he also condemned neo-Nazis and white supremacists, but critics saw his comments as condoning the protesters’ racist message.

Biden launched his campaign in April 2019 in a video with footage from Charlottesville, saying Trump spurred the bigotry that fueled the violence. Now that he is the nominee, the message has permeated the party machine, and it was one of Biden’s first references in his acceptance speech Thursday night.

“We can choose a path to becoming angry, less hopeful more divided, a path of shadow and suspicion, or, or we can choose a different path and together, take this chance to heal to reform to unite a path of hope and light,” Biden said.

“We are in a battle for the soul of our nation,” Nikki Fried, Florida’s Jewish agricultural commissioner said Tuesday evening, the second night of the convention, in an opening montage of state-level Democratic officials. The “battle for the soul” line is one that Biden has used repeatedly.

New York Gov. Andrew Cuomo, Vermont Sen. Bernie Sanders, Michelle Obama and others helped make what they said was Trump’s bigotry the main theme of the opening night of the convention. Cuomo explicitly invoked anti-Semitism as a threat.

“Over these past few years, America’s body politic has been weakened,” Cuomo said. “The divisions have been growing deeper: the anti-Semitism; the anti-Latino, the anti-immigrant fervor; the racism in Charlottesville, where the KKK didn’t even bother to wear their hoods.”

The theme featured large in multiple Jewish events around the convention, including at a meeting Tuesday of “Jewish Americans for Biden,” a group convened by Matt Nosanchuk, the Democratic National Committee’s Jewish outreach director.

Maryland Sen. Ben Cardin, who is Jewish, referred to Trump’s equivocations after the violence in Charlottesville.

“We were not surprised to see the white supremacy or anti-Semites here in America, but we were shocked to see that the President of the United States gave credibility to white supremacy, to the anti-Semites,” he said. “It was not an isolated example. He’s done that over and over again. There’s a direct correlation between the president giving rise to nationalism, and the rise of anti-Semitism.”

Biden has said in a campaign message to the Jewish community posted on his website that he would restore funding, cut by Trump, that tracks domestic extremism, prioritize the prosecution of hate crimes and “Lead a comprehensive approach to battling anti-Semitism that takes seriously both the violence that accompanies it and the hateful and dangerous lies that underlie it.”