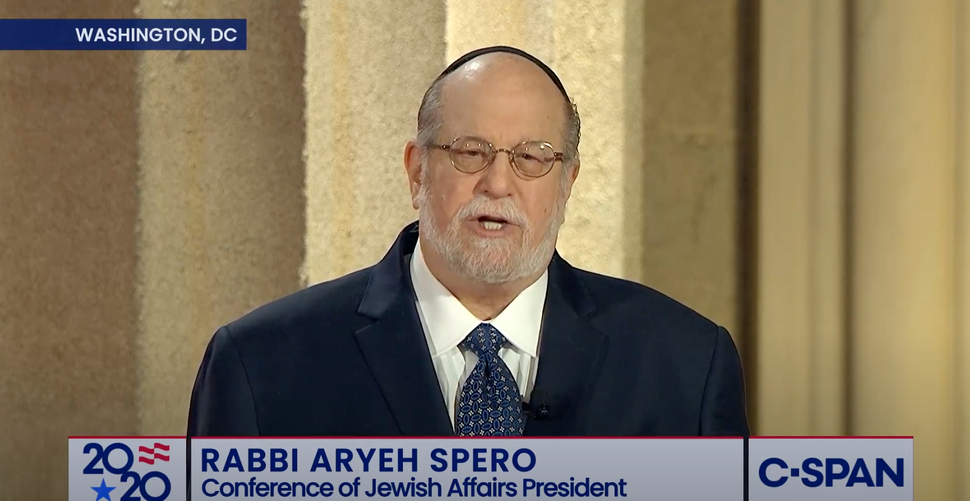 Rabbi Aryeh Spero, president of a Jewish group that speaks out for America’s “Judeo-Christian ethos,” gave the opening blessing for the third night of the Republican National Convention, using biblical language and Jewish ideas to describe America’s birth, and what Republicans describe as its current existential threats.

But if you were watching the RNC’s own live feed on YouTube, the rabbi’s name was Shubert Spero — a different rabbi, the former leader of Young Israel of Greater Cleveland, an Orthodox congregation. 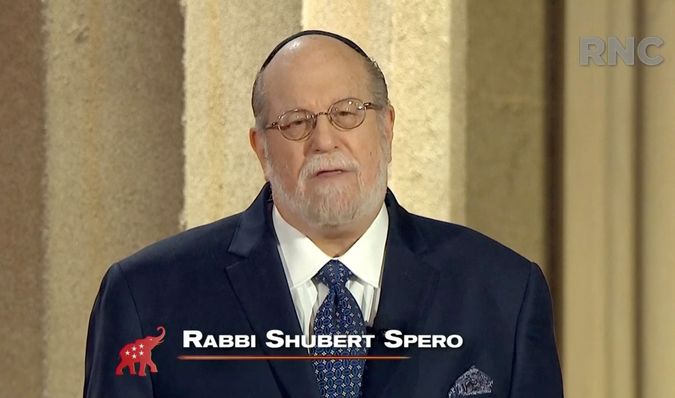 Aryeh Spero is the president of the Conference of Jewish Affairs, a group that says on its website that it promotes “classic American values.” The organization filed to become a nonprofit organization in 2019, according to public records, and Spero is the only officer listed on its website, aside from an honorary executive council.

“As Jews and as admirers of the Bible we believe in free markets and capitalism” and “judging people as individuals as opposed to indistinguishable members of groups,” its website states.

In his speech, Spero repeated many of his group’s talking points.

“We pray that God gives strength and health to our president, who has splendidly demonstrated daily his determination to defend and maintain the God-given rights of our citizens, as enshrined in our constitution and our declaration, eloquently passed down through our Judeo-Christian tradition,” he said in an address from Washington, D.C. “President Trump has stood up fearlessly against those who are corrupting the term ‘social justice’ so as to deny Americans their birthrights, and these divine gifts.”

Spero compared the founding of the United States with the “revelation at Sinai,” where the biblical Israelites received the Ten Commandments, calling the founding “a moment when the vision of God rendezvoused with the soaring and noble plans of appointed men.”

“Yet every so often, apace various generations, we are compelled to resurrect and give rebirth to our providential beginning, to renew our present days with the exuberance of those founding days,” Spero said, evoking language that Jews use at Passover that in every generation, people must consider themselves as though they personally came out of Egypt. “Perhaps that is what meant when we say, ‘Make America Great Again.’”

Spero has been decrying social justice protesters for years before Trump came onto the political scene. In 2012, he decried “hard-core leftist socialists” who “wish to repudiate the Constitution, our American ethos, the whole Judeo-Christian system that gave us success.”

Spero has been a fringe political figure for decades. He was one of four co-chairman of Pat Buchanan’s 2000 campaign for the presidency with the Reform Party. In 1996, he co-founded a short-lived think tank, the National Coalition of Black and Jewish Americans, with Armstrong Williams, the conservative talk show host.

But Spero is not Shubert Spero, who lives in Israel and is in his nineties. They are cousins, according to Rabbi Gil Student, Book Editor of the Orthodox Union’s Jewish Action magazine.