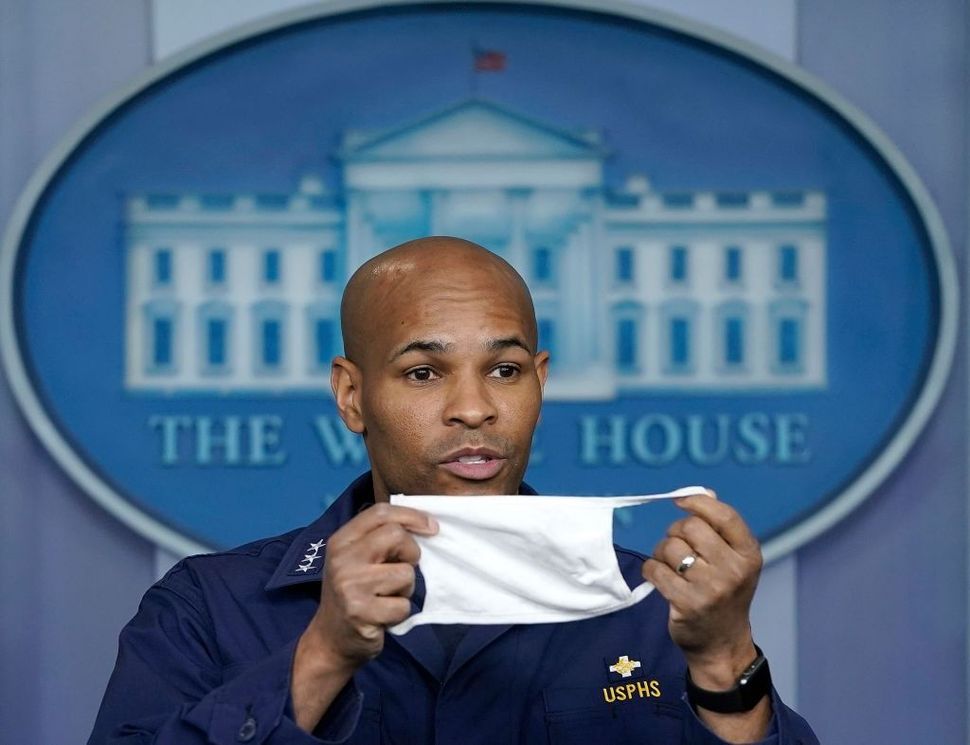 U.S. Surgeon General Jerome Adams holds up his face mask during the daily briefing of the coronavirus task force at the White House on April 22, 2020 in Washington, DC. Image by Getty Images

If you’re sitting in the front row of a synagogue holding in-person services this year on the High Holidays, make sure there is plenty of distance — or, even better, a piece of plexiglass— between you and the shofar blower.

That’s one of the things the hundreds of rabbis learned on a Sep. 1 call with US Surgeon General Vice Admiral Jerome Adams, organized by the Rabbinical Councils of America and the Orthodox Union.

The rabbis are treading a fine line between trying to maintain a traditional spiritual practice and staying safe at a very untraditional time.

Rabbis and community leaders were invited to submit questions in advance of the call, one of many the Surgeon General coordinates regularly with American faith communities. Previously, Dr. Anthony Fauci addressed Orthodox rabbis in May, on a call also organized by the Orthodox Union.

“People will heed your advice, in ways they won’t heed my advice as Surgeon General,” Adams told Orthodox rabbis and community leaders, emphasizing their power in influencing community members to take restrictions seriously. “You play a critical role in response to the pandemic,” he said.

Adams reviewed High Holiday practices, such as tashlich, the priestly blessing and shofar blowing. “When it comes to the shofar blower, make sure the horn is far away from others to limit risk of spreading droplets,” he said. “There are reports of people playing instruments, where viral droplets come out.”

In his opening remarks, Adams shared his experience handling the HIV epidemic in rural Indiana. “The people who were most critical to us getting to where we are now were the local sheriffs, local business community and local faith leaders,” he said. He stressed that, in religious communities, often community members will listen to clergy even sooner than medical professionals.

Adams also asked rabbis to consider congregants’ mental health, to connect them with professionals if necessary and to offer emotional support.

Adams told the group that Fauci told officials this morning that he is confident that there will be a vaccine for COVID-19 by the end of this year.

“This will not be forever, it’s important that you as faith leaders make them understand that. Reassure them that this is temporary,” Adams told the rabbis. “No one knows more than the Jewish people that you have the capability to sacrifice for the longer-term game.”