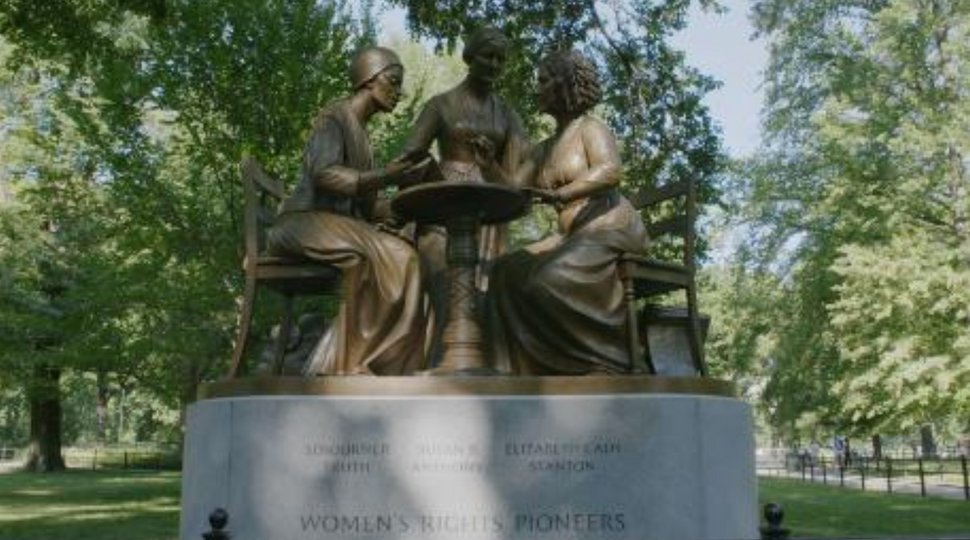 When the statue of Elizabeth Cady Stanton, Susan B. Anthony and Sojourner Truth was unveiled in Central Park, becoming the first statue in Central Park to honor historical women, the Jewish couple largely responsible for making it happen watched the proceedings via Livestream from their home in La Jolla. The former longtime New Yorkers couldn’t be present due to COVID-19.

“If we had continued to live in New York, we’d be part of the public face of the conversation and we would have physically been there,” said Myriam Miedzian. “Even after we moved to California, we’ve been engaged almost daily in making it happen.” 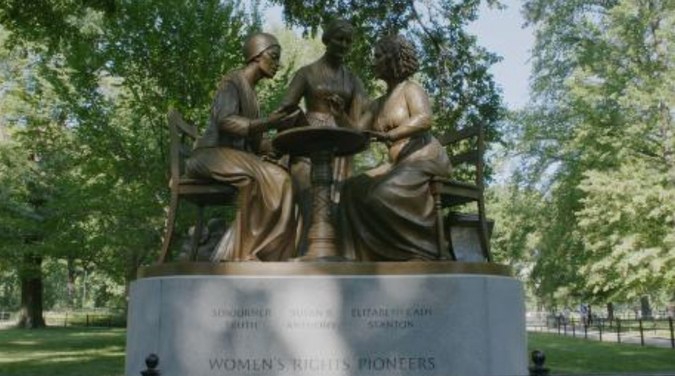 How did the statue, dedicated on the 100th anniversary of the ratification of the 19th Amendment granting women the right to vote, come to be? Blame it on a Polish king.

Miedzian is a former philosophy professor and author of “Generations: A Century of Women Speak About Their Lives,” with her daughter Alisa Malinovich, and the groundbreaking “Boys Will Be Boys: Breaking the Link Between Masculinity and Violence.” She is also a Holocaust child refugee. Her husband Gary Ferdman is a former community organizer and fundraiser for progressive causes who served on the board of Rabbi Arthur Waskow’s Shalom Center for over 20 years. 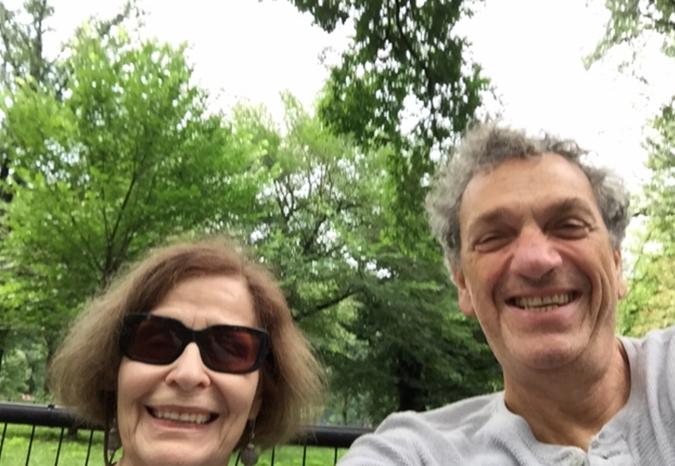 Myriam Miedzian and Gary Ferdman at the Central Park site of the women’s statue they successfully campaigned for.

They lived on the Upper East Side until a few years ago when they relocated to live near Miedzian’s daughter and grandchild and, like so many New Yorkers, they took frequent walks in Central Park. And as they did, they began to notice that nearly every statue they came upon was of a man. Some were well-known, like Alexander Hamilton and William Shakespeare. But what about Albert Bertel Thorvaldsen, a Danish sculptor, or Fitz-Greene Halleck, an American writer? Why were these lesser known figures deserving of statues, they wondered.

And more importantly, where were the women?

Given that Miedzian and Ferdman run in feminist circles, they began asking their friends. “Not a single woman, even the most feminist women that I asked, ever noticed this,” said Miedzian.

One could say the final straw was the statue of 14th century Polish King Wlasyslaw II Jagiello on horseback at the southeast end of the park’s Great Lawn. The statue commemorates the Battle of Grunwald, and was made for the Polish 1938 New York World’s Fair pavilion.

“Looking at this enormous statue of this huge guy on his huge horse, with his two swords crisscrossing, I began wondering what are the criteria for having a statue anyway?” Miedziansaid. “Who gets to be here?”

Those very musings prompted them to write about it in HuffPost in 2013. That initial blog post was entitled “Time to ‘Remember The Ladies,’ in Central Park, using a line that Abigail Adams wrote in a 1776 letter to her husband John and the Continental Congress, warning that women’s rights should be recognized.

In that blog post, they wrote they had come up with a list of 60 women who they felt were eligible to be recognized by a statue, like Rachel Carson, considered the mother of the environmental awareness movement, and Sara Cedar Miller, official historian and photographer of the Central Park Conservancy.

But the pair knew they’d need help if they were to get anywhere. Realizing that suffragists Susan B. Anthony and Elizabeth Cady Stanton were at the top of their list, Miedzian took to Google, to seek out if there were any descendants of these women, which is how she found a woman named Coline Jenkins.

The couple picked up the phone and cold-called the great-great-granddaughter of Elizabeth Cady Stanton.

Jenkins said she often gets calls from people she doesn’t know because of her lineage.

“It’s so much fun because you never know who it’s going to be,” she said, “I always say ‘yes’ to everything.”

What Miedzian and Ferdman didn’t realize was that Jenkins had experience with statues, too. She had already been involved with moving a statue of her great-great-grandmother that had been donated 75 years earlier that was relegated to a crypt in the United States Capitol building, to the rotunda.

“Obviously things like this take tremendous group effort,” she said. Noting that the rotunda of the Capitol is controlled by both the Senate and the House of Representatives, and therefore moving that statue required two acts of legislation to be passed, she said, “That was difficult, so how much more difficult could it be to put something in Central Park? Bring it on.”

Together, they formed a nonprofit, called Monumental Women, and with Ferdman’s expertise in fundraising, got to work. Ferdman secured much of the early donations.

There were many hurdles, not to mention controversies about who should be included and how, along the way. Just one was that as The New York Times reported in 2015, there was an unwritten moratorium on all new statues in the park.

But that year, the parks department approved the idea. In the ensuing years, a competition was held and Jewish sculptor Meredith Bergmann’s design was chosen.

The statue was unveiled at the end of August. It’s on what’s known as the Mall, or Literary Walk, near 70th Street, south of Bethesda Fountain.

Miedzian and Ferdman remain a little frustrated though. Media reports always describe the initiative as undertaken by a group of women. As the author of a book called “Boys Will Be Boys,” Miedzian strongly believes that men have to be equal partners in supporting equality for women, or nothing will change. Ferdman is one of two men on the board of directors of Monumental Women, along with a friend of his who is its treasurer, David Spaulding.

“If you leave men out of the equation, we’re back to the same old, same old, that women’s problems are women’s problems to solve,” said Miedzian. “It ignores the fact that men being involved on behalf of women is absolutely critical. In women’s suffrage, men had to vote to give women the vote, or women couldn’t vote.”

Added Ferdman, “There’s so much focus on role models for young women, but another value of the statues is that men will understand the incredible achievements of women. Let’s not forget that changing men is one of the best ways to help women.”

Since Jenkins lives in Connecticut, she actually could attend the unveiling.

“I’m thrilled,” she said. “It’s a huge symbolic act to bring real women into such a public forum.”