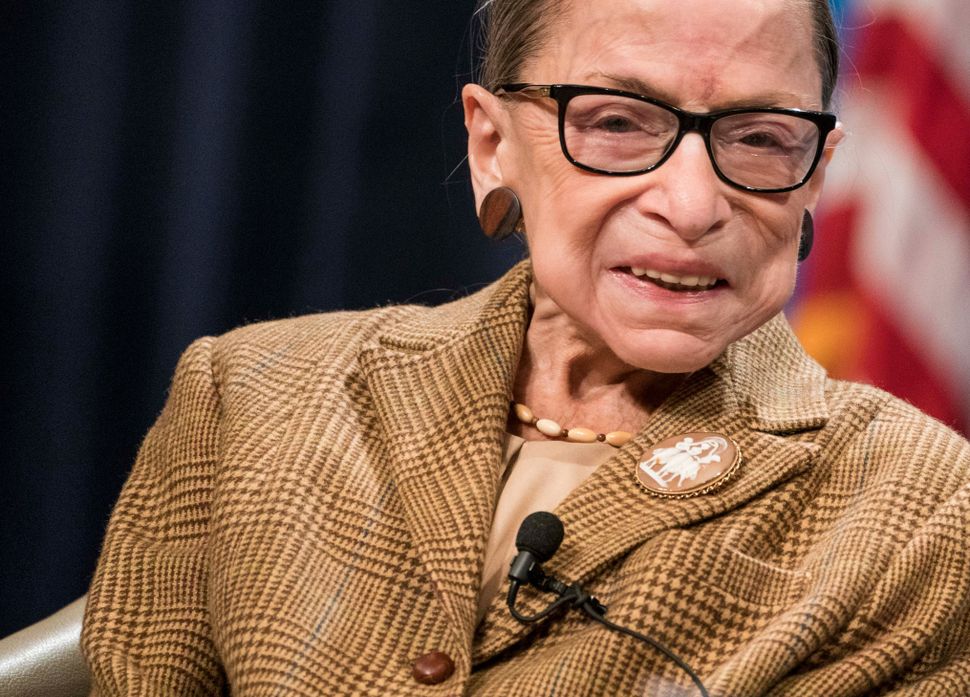 The 8×11 tan envelope came via regular mail, which felt old-fashioned, even archaic. Because most of what arrives snail mail is junk mail at this point, I didn’t pay attention at first.

Then I saw the return address: Supreme Court of the United States.

Inside I found a document I’ll treasure to this day: the handwritten, penciled, scribbled notes of Justice Ruth Bader Ginsburg — instructing me on what I had to change in a lyric I’d written and sent to her in hopes of getting her blessing.

I had met Justice Ginsburg in 2005, when she was one of 62 prominent Jewish Americans I interviewed about their Jewish identity or lack of it for my first book, “Stars of David: Prominent Jews Talk about Being Jewish.” I will never forget sitting next to her small frame, which she’d dressed in all black, dwarfed by her large eyeglasses. She gave me so much time, that I felt almost guilty — as if I should remind her she had some cases to get back to. 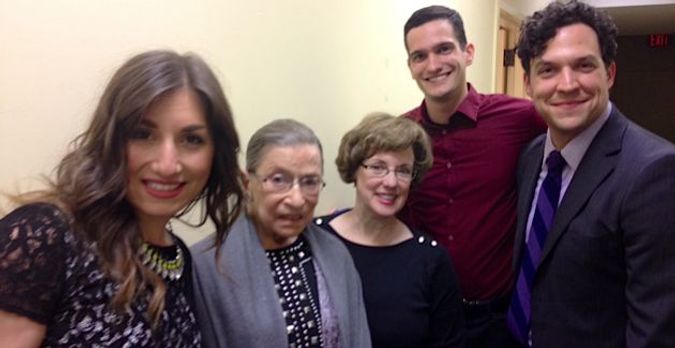 Ruth Bader Ginsburg at a 2014 performance of “Stars of David” at Theater J. Image by Ari Roth

The producers asked me to collaborate with Tom Kitt, who had won both a Pulitzer Prize and a Tony Award for his score in “Next to Normal,” to write a song capturing RBG’s story.

I chose to zero in on a heartbreaking chapter she shared in our interview — one which stopped me in my tracks because it was exactly the same experience my mother, Letty Cottin Pogrebin, had at almost exactly the same age:

Both Mom and Ginsburg lost their own mothers to cancer as teenagers — Mom was 15, Ginsburg 17. Ginsburg’s mother died the day before her high school graduation; she missed her ceremony, and all her awards and ribbons were carried home to her — by her teachers. Both Mom and Ginsburg had been raised with a yeshiva-worthy Jewish education, yet because they were female, neither was permitted to recite Kaddish, the mourners’ prayer.

The fact that their tradition could turn its back at a time they arguably needed it most was so painful that it tore their connections to Judaism, at least for a number of years. They could not forgive the prohibition, nor the absolutism. “When my mother died,” Ginsburg told me, “the house was filled with women; but only men could participate in the minyan….That time was not a good one for me in terms of organized religion.”

In a twist of coincidence, my father, Bert, was a Harvard Law School classmate of Ginsburg’s husband, Marty, whose love and cheerleading for his wife was legendary — and beautifully told in the superb documentary “RBG”. So I knew, from hearing and reading about her through the years, that RBG had returned to a certain kind of bedrock Jewish identity — particularly through the lens of doing justice and repair, talking often about how Jewish tenets had informed her sense of fairness.

When I visited her court chambers for our interview, she showed me the gold mezuzah on the doorframe, given to her from a yeshiva in Brooklyn, where she grew up. And she told me proudly that the custodians of the court knew not to put a wreath on this Justice’s door.

She also pointed to the framed lithograph of the Hebrew command from Deuteronomy: “Tzedek, tzedek, tirdof — Justice, justice, shall you pursue.”

When the letter arrived from the Supreme Court, I had to look closely to make out Ginsburg’s edits on the lyric: her handwriting was small, her corrections meticulous. “I didn’t call my father ‘Papa,’ but ‘Daddy.’” She also corrected the name of the yeshiva she had attended in Brooklyn.

And then she gave me her hechsher: she liked the song very much.

In June, 2014, she watched it and the rest of the show performed at Theater J, a program of the Washington, D.C., Jewish Community Center. She sat close to the stage, one seat from the aisle, and told the cast afterwards she was moved to laughter and tears.

Abigail Pogrebin, an author, journalist and public speaker, is a contributing writer for the Forward. The lyrics to the song, “As if I Weren’t There, are below. Click here to listen to it on Spotify.

Song for Justice Ruth Bader Ginsburg based on her interview for “Stars of David: Prominent Jews Talk about Being Jewish.” (Music by Tom Kitt, lyrics by Abigail Pogrebin)

I’m 17, and Mama’s ill
People whisper around her
I’m expected to be brave – I say, “I’ll try.”
The day before my graduation
I watched her die.

We gathered in the living room —
Relatives and neighbors
I expected to stand up to chant the prayer.
But women were forbidden, which felt so unfair.

Chorus
Count me in…the minyan
Yes, I know the law – 10 men, 10 men.
Please don’t explain that to me again.
She’s been my closest friend
since I was born
and now, Daddy, I just need to mourn.
Please let me stand next to you
Let me say the prayer.
But laws can’t be broken; they prayed without me
as if I wasn’t there.

My mother nudged me every day —
‘Ruth, you’re smart; keep reading.’
Not many girls knew Kaddish —
I was one of the few.
But the faith that I was born with
didn’t care what I knew

Bridge
A daughter’s voice is quiet
at the moment it should be heard
Yis’ga’dal v’yis’kadash
sh’may ra’bbo.
I have tried to be the person who my mother saw
Who my mother saw…