L.A. congregations create a pandemic-safe ‘shofar wave’ across the city 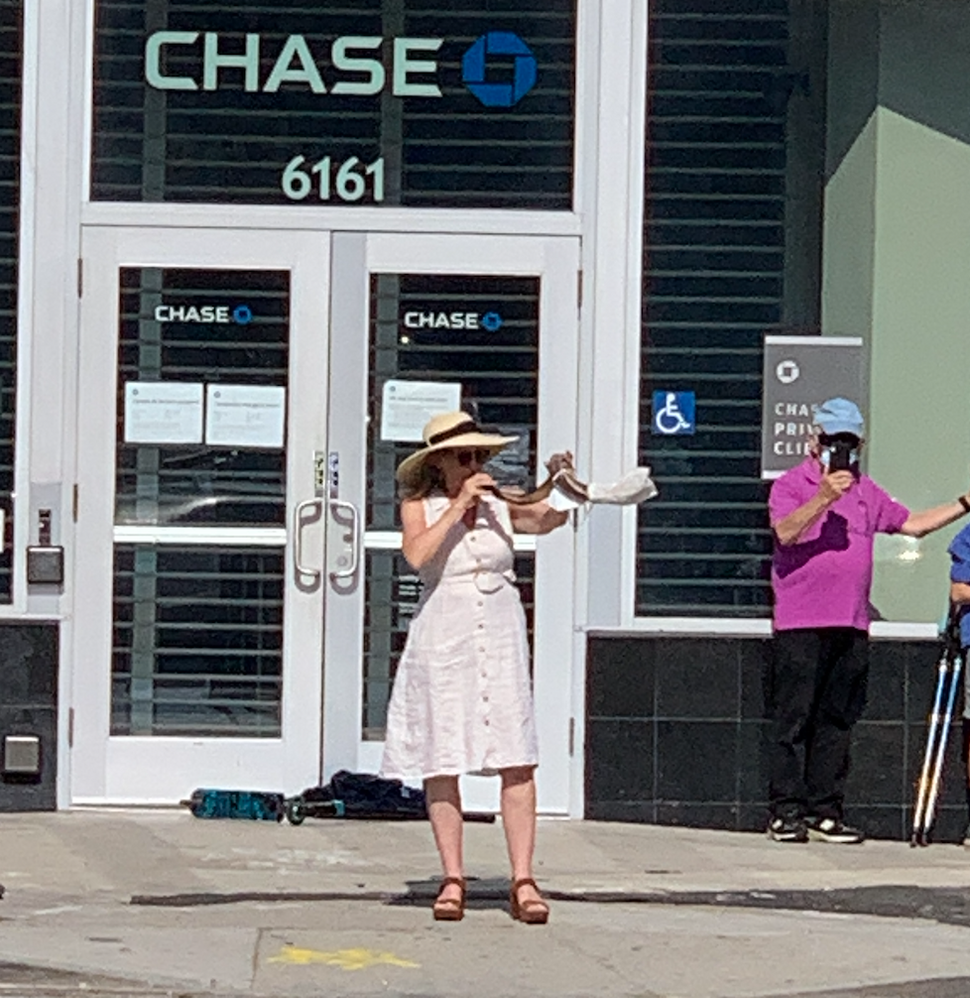 On Sunday afternoon at the busy intersection of Pico Boulevard and La Cienega Boulevard, Temple Beth Am congregant Sandra Lepson was among those who’d turned out to hear the shofar in a public space with other people while maintaining social distancing.

“I thought this was a really cool idea and I wanted to be witness to it,” she said before a trio of shofar blowers, standing outside a Chase Bank, a Sherwin-Williams paint supply store and David’s Bridal shop, blew shofars over the cacophonic sounds of traffic and car horns. 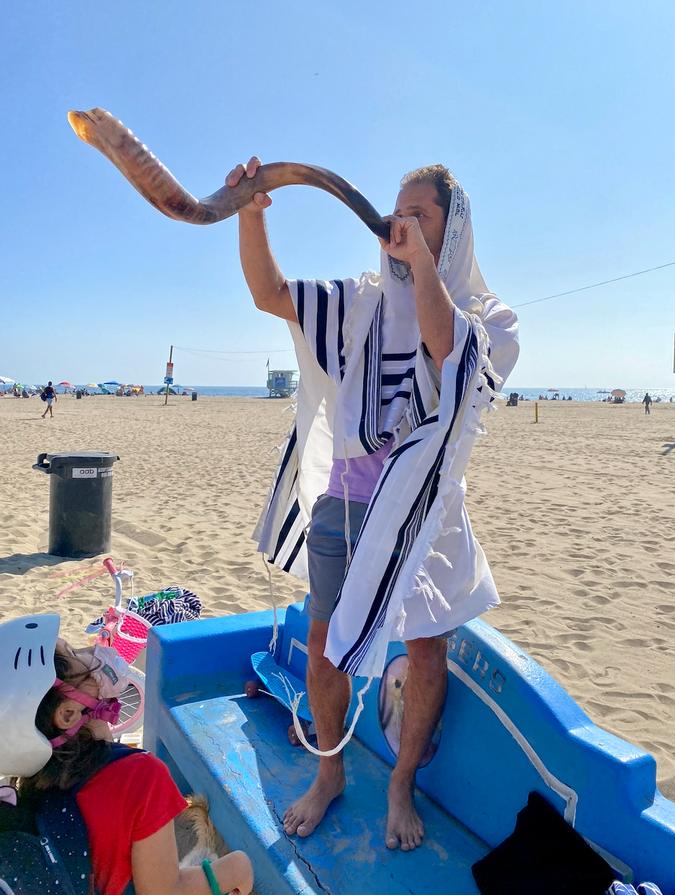 Greg Rishe prepares to blow shofar at Will Rogers State Beach as part of Shofar Wave on Sept. 20. Image by Shawn Landres

Such was the shofar blowing experience for those celebrating High Holy Days during COVID-19. On the second day of Rosh Hashanah, dozens of Jewish communities across Los Angeles held outdoor shofar blowing ceremonies around the city as part of Shofar Wave, which, co-organized by the Jewish Federation of Greater Los Angeles and progressive egalitarian congregation IKAR, enlisted more than 30 synagogues to place shofar blowers on public street corners and provide an opportunity for people to fulfill the central mitzvah of the High Holy Days.

“During these incredibly challenging times where most of our community is homebound, we are excited to partner with IKAR so that our entire community can share the mitzvah of hearing the sounds of the shofar in every neighborhood across our rich and diverse Jewish community,” Los Angeles Federation CEO Jay Sanderson said in a statement.

Those who had turned out to Shofar Wave sites were asked to stand at least 12-feet from the shofar and to maintain social distancing from others in accordance with Department of Public Health protocols. As an extra precaution, shofar blowers covered the wide ends of their horns with facemasks to limit the possibility of infection.

Shofar Wave kicked off on Sept. 20, the second day of Rosh Hashanah, at 3 p.m. outside Pasadena Jewish Temple and Center and culminated abut 44 miles away at 4 p.m. in Thousand Oaks. 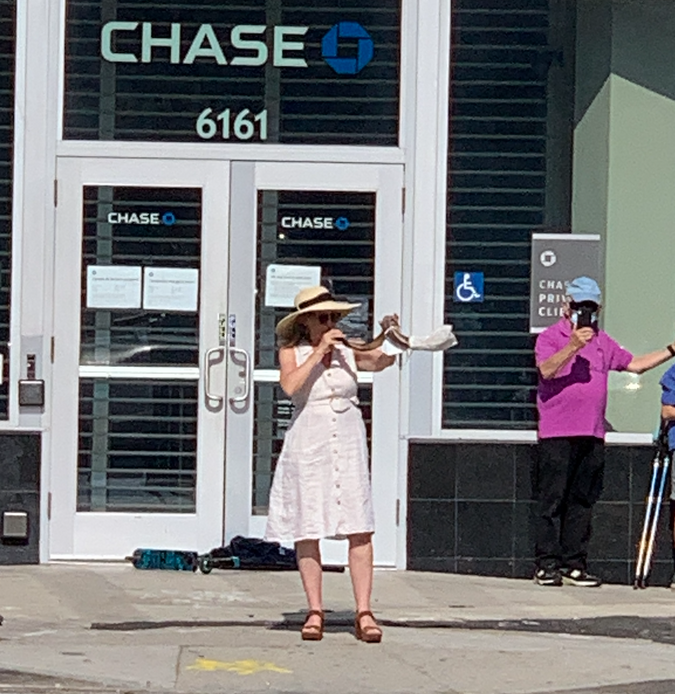 At 3:10 p.m., the Nefesh congregation placed three shofar blowers at the corner of Eagle Rock Boulevard and Chickasaw Avenue, where Rabbi Susan Goldberg called out the names of the blasts – tekiah, shevarim and truah – beckoning the shofar blowers to sound shofar while a small group looked on. 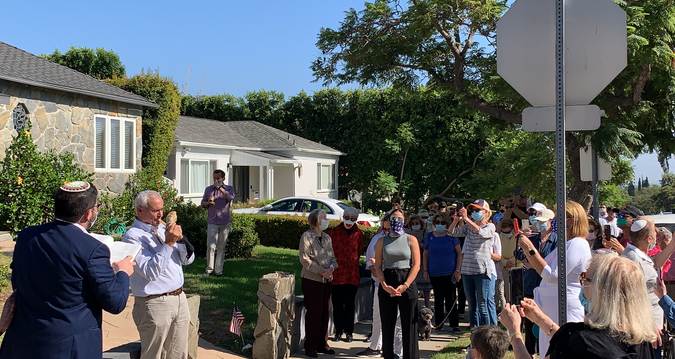 At 3:20 p.m., IKAR blew the shofar at one of its six Shofar Wave sites at the corner of Pico and La Cienega. Standing outside a Shell station at the southwest corner of the intersection, Lepson said Shofar Wave was one example of people adapting to the unprecedented realities of celebrating High Holy Days in a pandemic. Earlier that day, Lepson had attended services at Beth Am, a Conservative congregation in Pico-Robertson, where worshippers were placed into small, socially-distanced groups, or pods, and each pod had been responsible for different aspects of the service, including the Torah reading, she said.

“The holidays during COVID are being redefined,” she said. “We all have to be resilient and think outside the box.”

Another community member, who declined to be identified in this story, shared her experience of going with her mother to hear shofar at a park in Beverly Hills on Sunday. Her mother had not been out of the house for months but was willing to go hear shofar because she was able to sit in the car while the rabbi sounded the horn.

The woman said her mother cried upon hearing the shofar. “It was very powerful,” she said.

Not everybody, however, was pleased to see large groups of people gathered to hear shofar. At the Pico and La Cienega site, one person drove by and said, “Thank you for slowing the spread of COVID,” and attendees – including IKAR congregant Naomi Goldman – said the passerby was being sarcastic.

Goldman said she had begun the day doing virtual services with IKAR, an experience, she said, that “transcended the computer, transcended the screen.”

Later that afternoon, after coming together with others for shofar blowing, she said, “I feel blessed I was able to be there and see friends.”

L.A. congregations create a pandemic-safe ‘shofar wave’ across the city