Stitching together a friendship amidst the turmoil 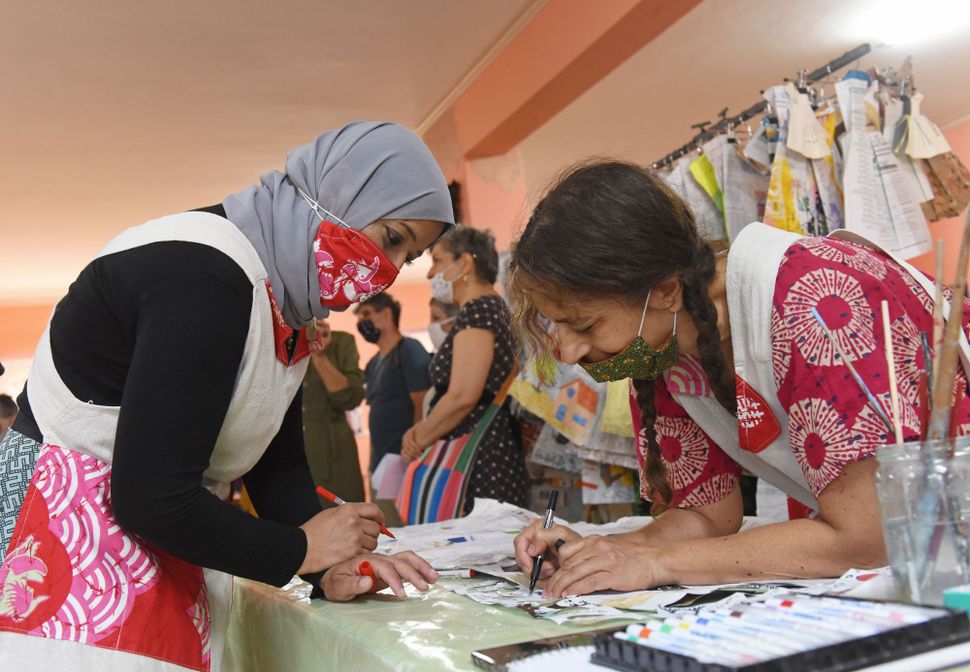 Umm al-Fahm, Israel. The pair’s hands fly over their creation in tandem. Two artists, one in braids, one wearing a hijab, and both in masks and matching red and white smocks.

Together they smooth and press down on swaths of paper in quiet, precise unison, making folds and creases of dresses they piece together from the paper scraps of their everyday lives: shopping lists doodled on by a child, newspapers in Hebrew and Arabic, a “get out the vote” election flyer in both languages.

“I think we make politics by being friends,” says one of the artists, Hadass Gertman. 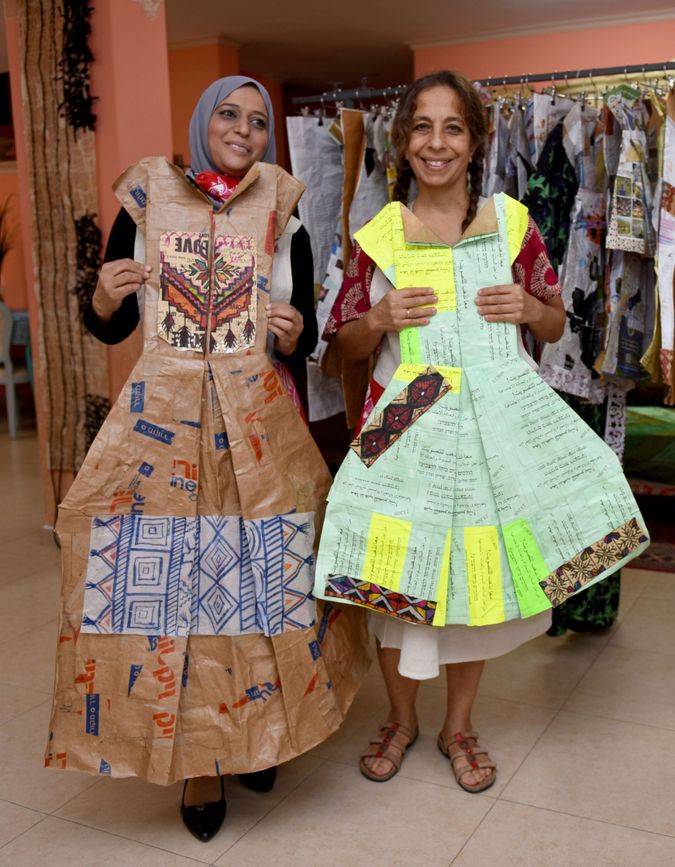 The friendship and art-making of Gertman, a Jew, and Faten Elwi, an Arab, began against the unlikely backdrop of the Second Intifada. It was 2003, three years into the Palestinian uprising, a violent period of clashes and suicide bombings. But after meeting an at an art exhibit, the two bonded as mothers to baby girls, both looking for time to do their art. They began meeting in Elwi’s home, in an Arab village in the center of Israel, to work on their first joint artistic project: a dress made of folds of red hand-sewn roses.

While the bad news swirled around them, they continued to meet and stitch and design. In the process of creating together, they got to know more about one another — their families, the different cultures they had grown up in.

Gertman’s visit to Elwi’s home was the first time she had been inside an Arab home.

A woman approached them during their first exhibit, in 2004. She peered at their dress of red fabric roses and asked if it symbolized the spilling of Jewish and Palestinian blood.

Elwi took offense. “Like that could be the only interpretation?” she said. “Because I’m Arab and Hadass is Jewish? I really didn’t like that. I poured my heart into this work, I love Hadass and our work together and what this person thought of it felt really off base.”

The two came together again recently to exhibit a whimsical collection of paper dresses at an art exhibition inside the homes of residents in Umm al-Fahm. It was a “Green Tapestry” tour, an association of local non-profit groups that seek to promote Jewish-Arab tourism in the area arranged in conjunction with the Umm al-Fahm Art Gallery.

The symbolism of the exhibit inside Umm al-Fahm homes, mostly attended by Jewish Israelis, runs deep.

Umm al-Fahm is an Arab city of some 60,000 built into the steep hills overlooking Wadi Ara, or the Ara Valley. For many Jewish Israelis it’s considered a place to stay away from, a stronghold of anti-Israel sentiment in their minds.

It was the first Arab city to vote the radical Islamist movement into office, and its residents are known for their solidarity with their Palestinian counterparts in the West Bank and Gaza. Some Israeli politicians on the far right have called for the city to be transferred to Palestinian rule in the event of a possible future peace deal, an idea that has met pushback from locals who say that while they are proud of their Palestinian heritage, their rights as citizens of Israel should not be questioned.

Umm al-Fahm and Arab towns further north were also the sites of violent clashes between police and Arab youth that left 13 Arab youths dead in October 2000, at the start of the Second Intifada. Those shooting deaths remain an open wound.

But new associations were made in the minds of the Jewish Israeli exhibit attendees in each home they visited. They traveled in small groups limited to 20 due to COVID-19 restrictions. They heard from Jewish and Arab artists who described their artwork and shared their personal stories.

Gertman and Elwi as well as other artists, hosts, and visitors said they went through a process together of connecting and getting to know one another through the bridge of art.

Visitors looked through the rack of paper dresses made by Gertman and Elwi, examining how they were fashioned together like a collage from various scraps of their domestic lives. One dress is made of receipts. On another, beige packing paper with Hebrew writing is overlaid by Elwi’s drawings of traditional Palestinian embroidery. Among the dresses were notes scribbled to one another in Hebrew and Arabic — about missing one another, about the challenge of making plans to meet amid the noise of everyday life, politics and pandemic aside.

Through it all, they are committed to each other and this lane they have chosen: making art and a friendship, stitching it all together into something new and shared, like one of their dresses.

Stitching together a friendship amidst the turmoil