He was famous for fighting antisemitism. Now, his antisemitic statements are out. 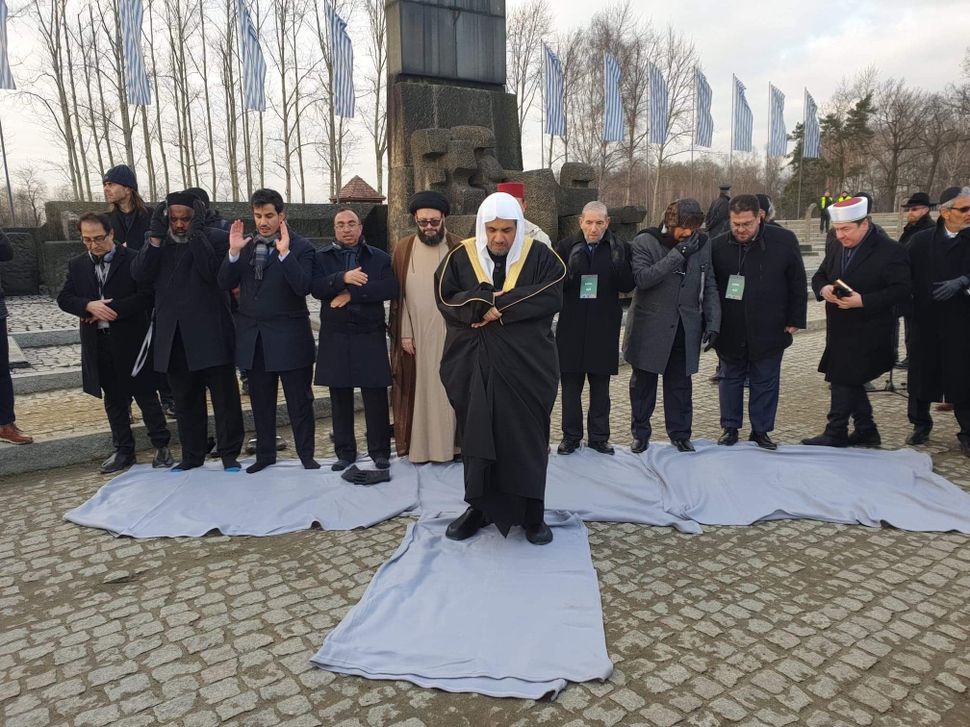 Mohammed al-Issa, the secretary-general of the Mecca-based Muslim World League and a former Saudi justice minister, joined a delegation of Muslim religious leaders at the Auschwitz Concentration Camp, Thursday, January 23, 2020. Image by Twitter/AuschwitzMuseum

A Saudi official who received an award for his work fighting antisemitism and racism in June made antisemitic comments on a Saudi radio program in 2014, according to a report released Monday by a Washington, D.C. think tank that is critical of the Saudi government.

Muslim World League Secretary General Dr. Mohammed al-Issa, among the most senior Muslim leaders to ever visit Auschwitz and the recipient of the inaugural Combat Anti-Semitism Award given by the Combat Anti-Semitism Movement and the American Sephardi Federation, was recorded on the Riyadh-based Quran Radio saying that Jews have “harsh hearts, harsh as stones, even harsher,” that “Jews distorted the Torah,” that Jews have are on the same misguided or “deviant” path as their ancestors, according to the report by the Institute for Gulf Affairs.

One of the programs on which al-Issa spoke was called “God’s call for Jews to Join the Muslim Community.”

The Forward was able to verify quotations with an independent Arabic translator for two of the three recordings quoted in the report, but the report’s author, Ali al-Ahmed, did not provide the third recording. On the recordings, al-Issa identifies himself with his full name.

A spokesperson for the Muslim World League said in an email that the organization was not aware of the recordings, though staff “have been made aware of determined efforts in recent months by a small, Washington-based group to sully Dr. Al-Issa’s groundbreaking interfaith work with leading Jewish organizations.”

The spokesperson said that the organization would not “allow ourselves to be distracted by the deplorable efforts of any organization that seeks to divide Muslims and Jews.”

Neither Combat Anti-Semitism, a group that monitors antisemitism, establishes interfaith relationships and most recently, has advocated for including anti-Zionism in the definition of antisemitism, nor the American Jewish Committee, which planned the Auschwitz trip, responded to requests for comment.

The State Department’s Special Envoy to Monitor and Combat Anti-Semitism Elan Carr, who attended al-Issa’s virtual award ceremony in June, said in an email that al-Issa is “a perfect example” of the transformed relationships between Israel and Arab states. He stressed that “President Trump and Secretary Pompeo have made it a top priority for our country to fight anti-Semitism throughout the world,” and that the department is “grateful to Sheikh Dr. Al-Issa for helping to build a new Middle East and forging ties of respect and affection between the three great Abrahamic faiths.”

Jason Guberman, the executive director of the American Sephardi Federation, the other group that gave the Combat Anti-Semitism Award, said in an email that “in word and deed,” al-Issa has shown his friendship to the Jewish people.

“We should have the courage to stand with him as he is relentlessly attacked by Islamists” who are “desperate to undercut his success at building bridges between Muslims and Jews,” said Guberman.

The author of the report, Al-Ahmed, is a Saudi national who has testified in front of congress and who has had his work featured in the New York Times and PBS’ Frontline.

Al-Ahmed said in a June lawsuit that Saudi Arabian officials have tried to “kidnap and kill him on multiple occasions.”

The messages contained in the recordings contrast sharply with al-Issa’s public-facing profile built over the course of about five years. Al-Issa was appointed to head the Ideological Warfare Center in 2015, another Saudi organization dedicated to combating extremism, joined the Muslim World League in 2016 and began at the King Salman Center for International Peace in Malaysia in 2017. He has received prizes from Italy, Russia and Senegal.

The American Jewish Committee, the State Department and many other groups have lauded him for spreading tolerance and generating interfaith dialogue.

But in the recordings, al-Issa paints a picture of Jews as simultaneously tricky and ignorant.

Al-Issa was serving as Saudi Arabia’s justice minister when his statements aired on the radio, but he is now the secretary general for the government-funded Muslim World League, which promotes moderate Islam and combats extremism. Al-Issa was justice minister from 2009 through 2015.

The report says both Crown Prince Mohammed bin Salman and Mohammed al-Issa “are the primary faces for Saudi Arabia’s charm offensive to the West.”

“Whereas Jews and Muslims lived centuries together, in these last decades we have sadly grown apart,” al-Issa said during June’s Combat Anti-Semitism Award ceremony. “Now, we must rebuild the bridges of dialogue and the bonds of partnership between our communities.”

He was famous for fighting antisemitism. Now, his antisemitic statements are out.