Ahead of Simchat Torah street parties, mayor says NYPD not sure how to enforce new health rules 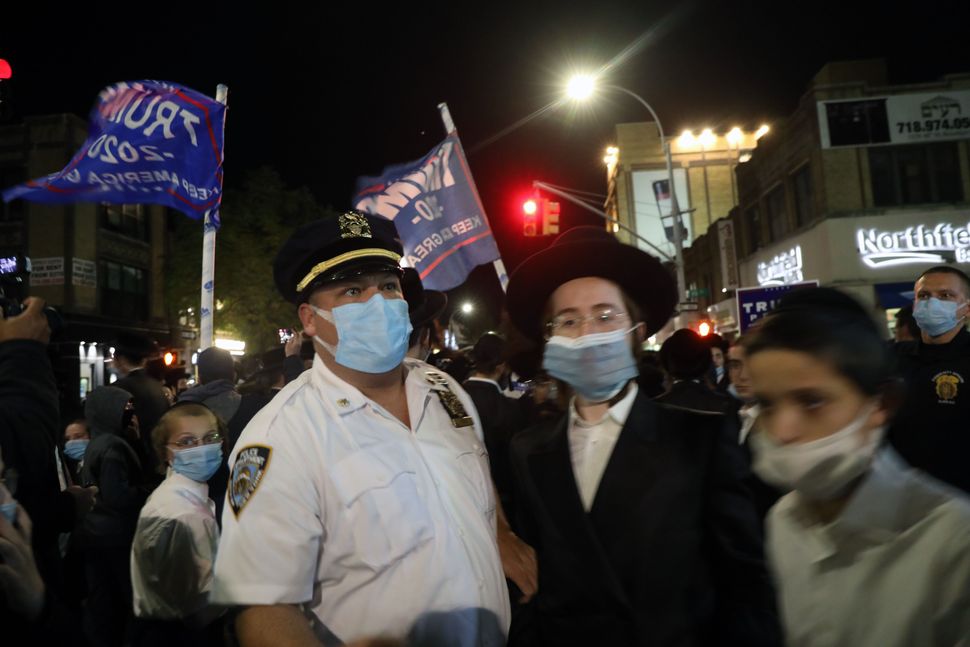 A police officer at the Wednesday evening protest in Borough Park. Image by Getty

The New York City Police Department does not know how it will enforce new state restrictions on religious gatherings just days before Simchat Torah, a holiday typically celebrated in Orthodox communities with massive dance parties that spill onto the street.

The confusion reflects a longstanding struggle on the part of the city and New York State to reconcile the competing demands of public health amid a pandemic and people’s rights to protest and pray, but it’s especially urgent now because Gov. Andrew Cuomo on Tuesday announced new COVID-19 restrictions that will severely limit synagogue life in the last weekend of the High Holidays.

The mayor’s office did not respond to a question Thursday afternoon about the new guidance that de Blasio said would be made available.

Representatives for the governor have not responded to questions about what the restrictions are for outdoor religious gatherings.

In response to questions about the guidance that the NYPD has received from the city about responding to gatherings, an NYPD spokesperson shared this statement: “The NYPD will continue our education and awareness campaign and will deploy our resources as conditions warrant.”

On Thursday there were signs that synagogues in “red” zone areas, facing the strictest coronavirus restrictions, were planning to proceed with Simchat Torah services as usual.

Orthodox Jews have expressed frustration that they are facing lockdowns on their religious gatherings, when the city and state suspended bans on mass gatherings at the beginning of the summer to allow for large protests against racist policing.

“You can’t expect youth to watch mass demonstrations, and then expect to comply with the rules of gatherings on a holiday,” said Yaacov Behrman, a liaison between city government and the Chabad Hasidic community in Crown Heights. Behrman added that he supports compliance with the restrictions.

This is really troubling! Bobov synagogue on 15th Ave and 48th Street in Boro Park plans to hold the same Simchat Torah celebrations as if Covid or @NYGovCuomo’s rules didn’t exist. That is @SEichenstein’s grand rabbi’s shul. (This is a ticket for the women’s section.) pic.twitter.com/qYIDx7yxRO

On Thursday, Agudath Israel of America, the legal advocacy and lobbying group, sued New York Gov. Andrew Cuomo over the restrictions. The group wrote in a filing in federal court in Brooklyn that Cuomo “has trampled” on Orthodox Jews’ “constitutional right to the Free Exercise of Religion.”

Community leaders have publicly signaled their opposition to the restrictions on synagogues, which limit attendance for synagogues of any size to 10 people.

De Blasio said that the city has changed its guidance several times throughout the pandemic to adjust for public demonstrations. In June, during large protests against racist policing, the city said it would relax its rules on banning public gatherings, so as not to infringe on first amendment rights to assembly.

On Tuesday and Wednesday this week, Haredi, also called ultra-Orthodox, communities have held large street gatherings, including a holiday celebration in which hundreds of men danced in the street in close proximity, and two nights of protest. During the protests, three men were assaulted by the crowd, including one man who was hospitalized and Jacob Kornbluh, a Hasidic journalist who was targeted by the leader of the protests, the radio personality Heshy Tischler.

Police said Thursday that they were investigating the attack on Kornbluh; they did not, however, issued any summonses or arrests related to social distancing or masking violations.

Tischler could not be reached Thursday afternoon.

The state has already lost one challenge to its coronavirus restrictions: On June 26 a New York judge ruled that the state would have to raise its cap for indoor religious services from 25% capacity to 33%, in line with the restriction on businesses.

During Sukkot, the harvest holiday, police have not shut down large Orthodox religious gatherings, and on Monday night, police were unable to disperse a raucous dance party in Crown Heights for Simchat Beit HaShoeva, a festival that takes place during Sukkot. Video showed dancers clashing with police officers, who subsequently let the dancing continue.

Videos of the event showed hundreds of men crammed together on Kingston Avenue, behind police barriers. An NYPD spokesperson said that the barriers were put out because “several” people moved into the street, “to ensure public safety and to reinforce the importance of best health practices.”

“There were no summonses or arrests as there was no reason for such enforcement,” an NYPD spokesperson said in a statement.

Cuomo has pointed to the need for strong enforcement of the new restrictions, while de Blasio has insisted that the police are in fact enforcing existing rules on mask wearing, distancing and gathering.

Cuomo has insisted that the restrictions are necessary to prevent the spread of the virus within the Orthodox community, as well as to stop the community’s high rates of coronavirus infection from causing a “second wave” of the virus throughout the New York City region.

Ahead of Simchat Torah street parties, mayor says NYPD not sure how to enforce new health rules