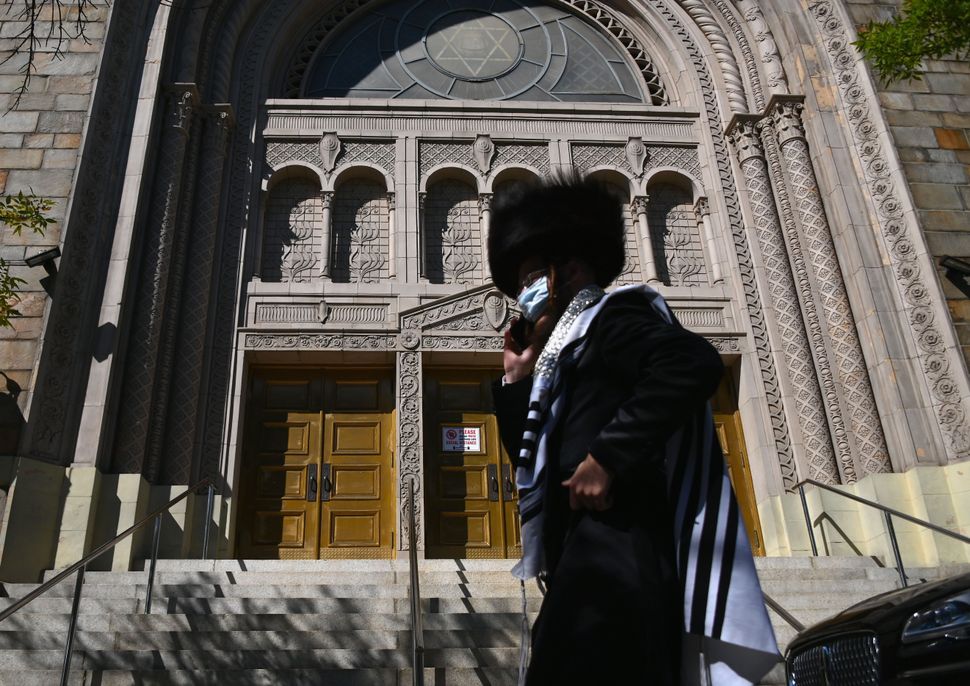 A Hasidic Jew walks by a closed synagogue in Borough Park, Brooklyn, on Friday October 9. Image by Getty

Orthodox Jews in Brooklyn proceeded with some indoor and outdoor holiday celebrations in their synagogues over the weekend, in defiance of restrictions limiting all religious gatherings to 10 or fewer people in neighborhoods where the rates of coronavirus infection have gone sharply up in recent weeks.

On Saturday evening in Borough Park — a neighborhood with one of the highest rates of coronavirus in the city — Hasidic Jews celebrated the holiday out of sight, inside synagogues. One synagogue had about 40 men, some of whom were dancing together.

That evening in Crown Heights, about 150 young men milled about in front of the Chabad movement’s headquarters at 770 Eastern Parkway, behind a tarp wall and police barriers. Other storefront synagogues had small crowds of young men dancing inside.

The gatherings came as the city and state governments have tried and failed to get the Haredi, also known as ultra-Orthodox, community to eschew prayer gatherings of more than 10 for last days of the High Holidays this year, even as health experts fear that higher rates of coronavirus infection in the community could seed a second wave of COVID-19 cases across the wider New York City region.

But after a week of intense media scrutiny, protests against the restriction and frustration at their community being singled out, few were willing to be interviewed about any of it.

“Let us celebrate our holiday in peace,” said more than one person in refusing to speak to a reporter Saturday night.

In Borough Park, few people could be seen wearing masks. An NYPD spokesperson did not respond to questions about any summonses issued for violations of health rules for areas facing coronavirus restrictions, saying in a statement that the department would “continue our education and awareness campaign and will deploy our resources as conditions warrant.”

Saturday night marked the beginning of Simchat Torah — the last of the High Holidays — when the cycle of weekly readings from the Torah is re-started with great fanfare.

Usually, Orthodox neighborhoods are alive with people singing and dancing around congregants holding their synagogues’ Torah scrolls, often in long lines or wide circles that in a typical year would spill into the street.

Within the Orthodox community, health professionals had hoped for a subdued holiday celebration, warning that a raucous celebration, with infection rates high, could be “cataclysmic,” and lead to thousands of new infections.

This year, there were few street spectacles to be seen. Many synagogues had “no trespassing” signs or pieces of paper indicating that only members were allowed inside.

Yet despite urgings from leading rabbis to avoid gatherings due to health risks, many communities went ahead with services anyway.

On Friday, hundreds of Hasidic Jews attended an hours-long service inside a synagogue that was led by a COVID-19-positive rabbi, Gothamist reported.

On Sunday, Cuomo said in a conference call with reporters in response to a question about the incident that “if true, then I hope action will be taken. You cannot allow a law to be violated otherwise no one will follow it. People will get sick. People will endanger nurses and doctors. People will infect other people who are innocent bystanders, and people will die. This is not a joke.”

The media attention from the past week has left many in Hasidic neighborhoods wary of reporters. On Saturday evening, Hasidic men routinely asked reporters on the street to leave.

In one instance, a Forward reporter was surrounded by a group of 20 men who threatened her as they yelled at her to stop reporting.

“Do you want to be the story yourself?” said one of the men, none of whom would identify themselves. “Do you want something to happen? No? So leave.”

Few people on the street could be seen wearing masks as they walked into synagogues with signs in English requiring congregants to “wear a mask at all times while staying in the premises.”

In Borough Park, the streets were not crowded, reflecting a calm that has returned to the neighborhood after two nights of violent protest last week against new restrictions for areas with high rates of coronavirus infection. The protests resulted in the assault of three people, including one man who had to be hospitalized and Jacob Kornbluh, a Hasidic journalist who was targeted by the protests’ organizer, the radio personality Heshy Tischler.

Tischler released a video message on Thursday saying that there would be no more protests, but stating falsely that Jews could celebrate Simchat Torah without any restrictions.

On Sunday evening, NYPD officers arrested Tischler for inciting a riot in Borough Park last week in connection with the protests.

Shortly after the arrest was announced, a Twitter account connected to Tischler tweeted out Kornbluh’s address and other personal information. A mob of Tischler’s followers swarmed Kornbluh’s home in Borough Park. Videos from the scene showed a number of police vehicles stationed there.

Police stationed near religious gatherings Saturday evening did not attempt to close down the celebrations, following on the Borough Park protests and holiday celebrations in Crown Heights early last week at which police either tried and failed or appeared reluctant to enforce state rules on gatherings.

The NYPD did not immediately respond to a request for information about whether officers had issued any summonses or tickets related to religious observance in hotspot areas.

On Thursday, New York City Mayor Bill de Blasio said that the NYPD still did not have finalized legal guidance for how to enforce the state’s restrictions on gatherings for religious observance. He also criticized Borough Park police’s failure to make any arrests on either night of protests.

Orthodox groups had suggested that the planned restrictions, primarily affecting Orthodox neighborhoods, constituted an infringement of religious freedom. Agudath Israel of America, an Orthodox umbrella organization, challenged the rules, writing in a filing in federal court in Brooklyn that Cuomo “has trampled” on Orthodox Jews’ “constitutional right to the Free Exercise of Religion.”

Yet a federal judge ruled Friday that the restrictions could go forward, raising questions about why the synagogue gatherings observed by journalists Saturday evening were allowed to happen. According to state rules for the areas facing the toughest coronavirus restrictions, anyone violating orders against mass gatherings can face a daily fine of up to $15,000.

In a tweet following the ruling, Agudath Israel called it a “crushing disappointment,” and urged adherence to health guidelines.

Crushing Disappointment: Judge denies TRO, allows draconian restrictions on religious worship in NY. More info to follow. Agudah reminds everyone to follow health guidelines as we celebrate zman simchaseinu. We will regroup after Yom Tov and determine our next steps.