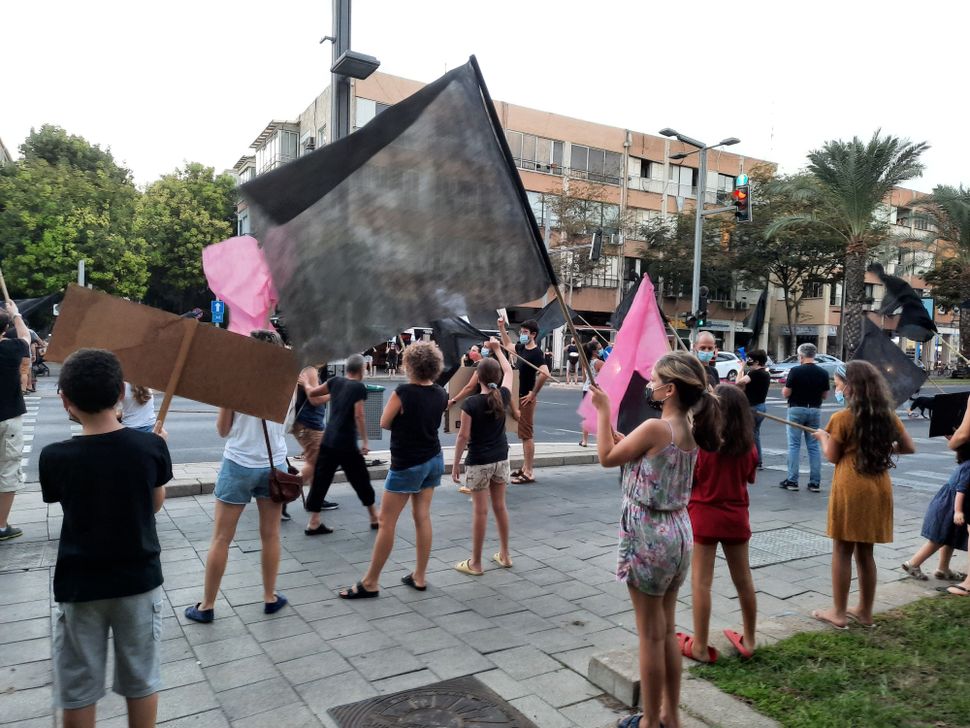 Some 600 people filled an intersection in the northern Tel Aviv neighborhood of Yehuda HaMacabee on Saturday night — new fathers with babies strapped to their chest, women hoisting black flags, retired couples and children banging pots and pans. “Balfour is here,” read signs hanging from the balconies of apartment buildings, as the demonstrators pumped their fists into the night sky and chanted “Leave! Leave! Leave!”

“Balfour” is the name of the Jerusalem street where the Israeli prime minister’s residence sits — and where crowds of up to 15,000 had been gathering weekly since June to call for the ouster of its current occupant, Benjamin Netanyahu.

Israeli protests against Prime Minister Benjamin Netanyahu have only escalated since the country’s second lockdown pic.twitter.com/CidMlgsgAU

But with Israel staring down a serious spike in coronavirus cases, Netanyahu imposed new restrictions on movement and gatherings last week, including that no one is allowed to travel more than one kilometer — about a half-mile — from home to participate in a protest. In response, the “Black Flags” group that had organized the Balfour demonstrations called for localized, block-party style protests in neighborhoods across Israel up to three times each week.

Israeli news outlets reported that Saturday’s was the largest yet with organizers saying some 200,000 people took part in 1,200 spots. 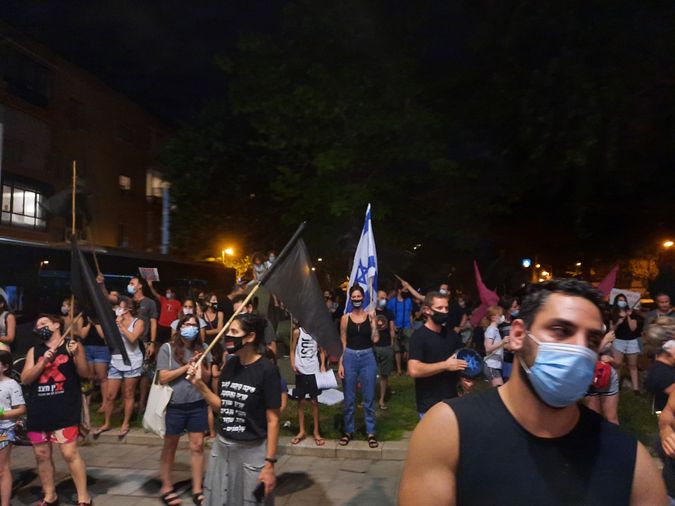 “This is so much more effective,” said Sharon Tal, 44, director of an organization that helps asylum seekers, as she walked out of her apartment building with her husband, three young sons, and their dog. When you hear the demonstrations starting right outside your door, Tal explained, “it sits on your guilty conscience. You can’t just sit at home.”

The “Leave” slogan, using the two-letter Hebrew word “Lech,” has become the latest rallying cry for Netanyahu to resign. The protests focus on his upcoming trial on corruption charges and his government’s beleaguered and confusing response to the pandemic. Israel faces record unemployment, and Netanyahu’s critics see him as afraid to crack down on the Haredi enclaves where coronavirus rates are highest for fear of offending his Orthodox coalition partners.

Netanyahu has repeatedly lashed out at the demonstrators as anarchists, and even called them “aliens.” He’s also blamed the protests for spreading the virus, although public-health experts say there is no such data linking the demonstrations to outbreaks. Meanwhile, there has been only a limited crackdown on large, often maskless gatherings in Haredi enclaves that have been found to be spreaders of the virus.

Indeed, Netanyahu’s opponents contend that the one-kilometer rule is aimed more at squashing the protests than protecting Israelis from the virus. But if that was the strategy, it seems to have backfired, as more and more people heed one of the new movement’s signature chants: “Come down from your balcony, the country is collapsing” (it rhymes in Hebrew, “Titzu me’hamerpeset, hamedina koreset”).

“This is the only way we can share our opinion, the only way we can enact our democratic rights,” said Ofri Vaisman, 45, the manager of a start-up, pausing her banging of a wooden spoon on a small pot to marvel at the scene around her. “It really strengthens a feeling of belonging.”

Back in the Yehuda Ha’Macabee neighborhood, Or Alcon, said that he and his wife had been regulars at the Balfour demonstrations and now were at the neighborhood ones whenever they occur. But Alcon said that his sister, who was on the street Saturday night with her young children, was joining the protests for the first time.

“A lot of people who would not think to go to Balfour are coming here,” he noted.

The Balfour demonstrations sometimes ended in violent confrontations with the police, who have blasted water cannons and used physical force to disperse protesters. Some of the recent, more local demonstrations have also met with clashes between protesters and police, including on Saturday night at HaBima square, in central Tel Aviv.

At the Yehuda Ha’Macabee demonstration, officers from the Tel Aviv police and the military’s border police were on hand in motorcycles, vans and a squad car, but did not interfere in the protests.

“We’re here because we really fear for our democracy right now when they limit our rights to come and protest and at the same time they look away while the ultra-Orthodox communities do what they do,” said Alcon, a 35-year-old lawyer. “It’s heart-warming and gives you a lot of strength to see your community show up and come together and show what they really think.”

Officials say that Haredim account for about 40% of Israel’s coronavirus cases, more than triple their portion of the population. As in New York, some people in the Haredi communities have flouted social-distancing rules and continued to join large gatherings during the recent high holiday period.

Israel went from international poster child for how to control spread of the virus to a cautionary tale after a strict lockdown in the early spring gave way to a rushed and sloppy reopening. By the end of September, it had one of the highest infection rates in the world.

“It’s not real leadership, it’s all political considerations, not professional ones,” complained one protester, David Shahar, 75, a retired banker, who fashioned a “flag” by tying a black T-shirt to a stick. “You see so many young people out here tonight. they are the ones hurt most economically from this crisis.” 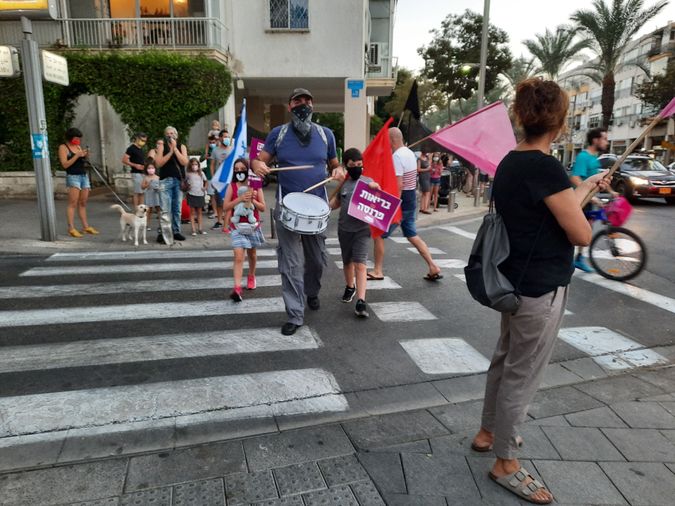 Among the now-ubiquitous black flags were also pink flags, meant to symbolize a return of hope and compassion in Israeli society, organizers said.

David Ber, a 52-year-old writer demonstrating Saturday said it was the fourth time he was out protesting in the neighborhood in the last 10 days.

“We are fed up, to use an American expression” he said. “The feeling here is we are united together — those of us who feel hurt economically, those who fear for democracy. And people like me who think Netanyahu is corrupt.

“It’s so moving to be here,” he continued. “Each time the crowd grows larger. And you don’t feel alone. I’ve never seen anything like this in this neighborhood and I’ve lived here my whole life.”

Dina Kraft is a freelance journalist in Tel Aviv.