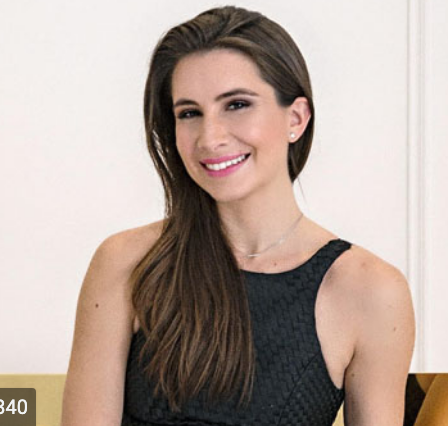 Some called it “the underground synagogue,” but the sanctuary of the Jewish Community of the Emirates would be familiar to Jews anywhere in the world.

During a recent service, several rows of chairs seat a group of around 10 men and women in separated sections. The chairs surround a simple table on which sits the Torah and a prayer shawl.

Whispers can be heard as the congregants take their seats. Outside the shul and in the adjacent garden, children run and play. Every so often, one of them bursts into the room to find his or her parents. The members all speak English with distinct accents: British, South African, American, French and Middle Eastern. It’s a group as varied in Jewish denominations as it is nationalities. And they have all come together to pray. 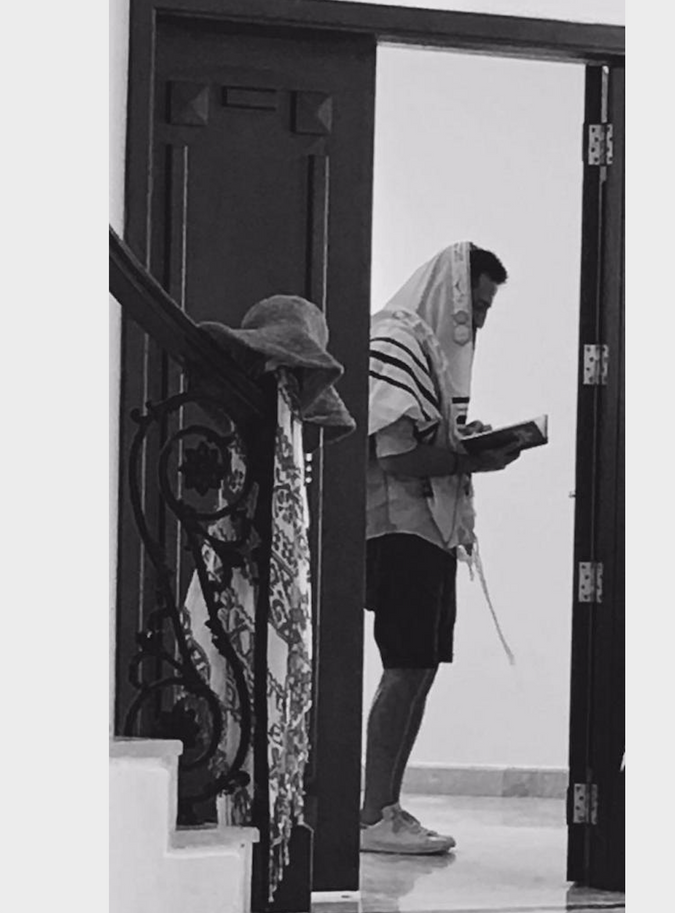 Prayer at the Jewish Community of the Emirates

For the better part of the past decade the Jewish Community of the Emirates has kept these services almost hidden from the public.

One would hear it whispered that a synagogue existed in Dubai, but no one knew where it was located, unless, that is, you had a Jewish connection. The synagogue became a subject of mystery and intrigue.

Even though the JCE had received approval to conduct its services by the Islamic sheikhdom that is the United Arab Emirates, the synagogue operated quietly, largely from an unmarked communal villa in Umm Suqeim, an upscale residential area of Dubai. 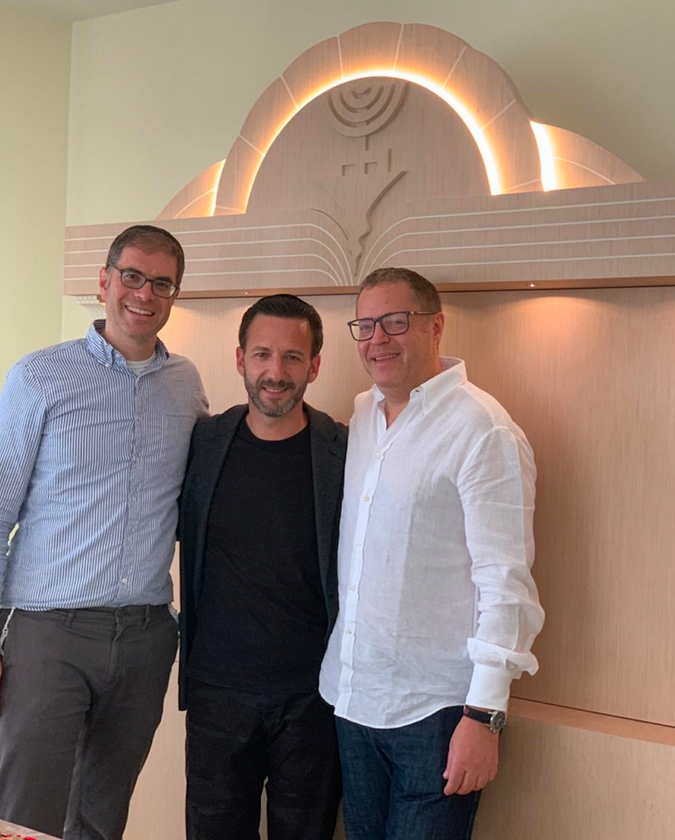 Rabbi Yehuda Sarna, Ross Kriel and Alex Peterfreund at the Jewish Community of the Emirates sanctuary Image by Jean Candiotte

Now the synagogue is sloughing off the mystery and becoming the public face of Judaism in the UAE — a harbinger of many, even deeper changes in the region.

The changes began August 13 with the announcement of the Abraham Accords, normalizing relations between the UAE and Israel. Bahrain followed suit. On September 15 at a White House ceremony, Israel, the UAE and Bahrain signed the accords, with President Donald Trump signing the document as a witness. 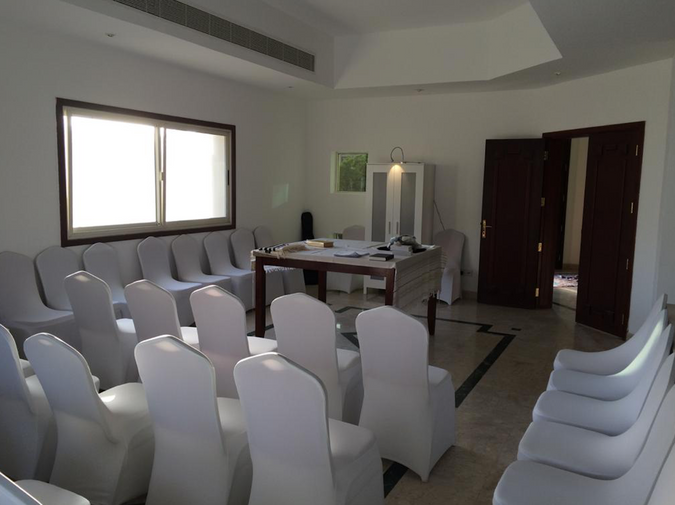 Inside the Jewish Community of the Emirates

On Thursday, Oct. 15 Israel’s Knesset is expected to vote to approve the accords. The signing opens the opportunity for Dubai’s small Jewish community to become the vanguard of what will likely be a mutually beneficial, if somewhat initially fraught, future between Jews and Arabs in the Gulf.

The Jewish Community of the Emirates is arguably the first new Jewish community in an Arabic and Muslim country in several hundred years.

The Jews in the UAE, like all foreign residents in the small Gulf country that has a population of just under 10 million, arrived in the country for business.

In 2010 a community of Jews began to slowly develop, principally in Dubai. It began as an informal group that met on an ad hoc basis until 2013, when it developed into a formalized prayer group or minyan led by Ross Kriel, an Oxford-educated lawyer from South Africa who has practiced in Dubai since 2008, and co-founded by Alex Peterfreund. Kriel, now the president of the Jewish Council of the Emirates, said the group has conducted religious services for nearly every Sabbath and major festival.

Apart from this growing Jewish community, there is very little evidence of Jews in the UAE. The nation’s Gulf neighbor Kuwait, had a Jewish community during the first half of the 20th century composed of predominantly Jewish immigrants from Iraq and Iran. In the emirate of Ras Al Khaimah, one of the UAE’s seven emirates, the Department of Antiquities and Museums recently revealed a Jewish grave headstone that was found in the area of Sham, located in Ras Al Khaimah. The headstone dates back to the period of 1507 to 1650, around the time when Hormuz, an island in the Arabian Gulf now belonging to Iran, had a thriving Jewish community. This moment came and passed quickly; since then there is no other documentation of Jews in the UAE.

In February 2019, members of the JCE held an annual general meeting and adopted a constitution first drafted in 2018. The constitution called for a pluralistic community, opening its doors to all Jewish denominations, as well as a governing committee, an office of President, and an office of Chief Rabbi.

Kriel became the JCE’s first president and Rabbi Yehuda Sarna, the first chief rabbi. Sarna is also the executive director of the Bronfman Center for Jewish Student Life at New York University (NYU), the University Chaplain for NYU, and an Adjunct Assistant Professor of Public Administration in the Robert F. Wagner Graduate School of Public Service. In 2020, the government of Dubai asked the JCE to direct the process of formal recognition for the other two Jewish communities in Dubai.

Jewish life at the JCE usually revolves around a villa in Dubai, where Jews from a variety of backgrounds gather for weekly prayers, holiday celebrations, and kosher food. Since the signing of accords, kosher food can be found more easily in Dubai at hotels and restaurants in preparation for the arrival of Israeli tourists and business people.

Due to present restrictions surrounding coronavirus, the location of JCE’s gatherings often changes — many times services are conducted via Zoom. The community recently celebrated Rosh Hashanah, Yom Kippur and Sukkot at specially designated locations due to the requirements of containing the coronavirus in the UAE.

The members of the JCE emphasize that while a change in perception may not be easy, the Abrahamic Accords spell signs of great things to come: Prospects of intercultural dialogue and mutual understanding between Arabs and Jews at long last.

“Most people probably view the Abrahamic Accords as only a peace deal with political and diplomatic significance,” said Kriel “In short, what is happening in the UAE goes beyond political and diplomatic matters and extends in the deepest way to how we regard each other. It obligates us as religious leaders and observant Jews, Christians and Muslims, to examine our traditions, scriptures, and history, and seek in practice and concept the strongest basis for mutual respect and a shared sense of common human frailty and potential.”

Kriel said the Abrahamic Accords, which have been named after the three Abrahamic religions rooted in what is now Israel and its surrounding lands—should be viewed as a call to action.

“They are called the Abrahamic Accords for a reason, and hence they signal that this agreement is much larger than a peace or political agreement,” he added. “These accords are calling on us to reorder the way that we see each other and our basic relationship with each other—Jews, Christians and Muslims.”

The normalization process included the presence of the Jewish Community in the UAE in “Celebrating Tolerance: Religious Diversity in the United Arab Emirates” published in 2019, the year designated the Year of Tolerance in the UAE.

That year, the Pope visited of the UAE and signed a “Document on Human Fraternity” with the Grand Imam of Al Azhar, Dr. Ahmed At-Tayyeb, and UAE leaders announced the creation of the Abrahamic Family House, a multifaith project that will include a synagogue, mosque and church in a single campus.

“At a time when we see so many headlines in the news about the spread of hate, racism, and antisemitism, the UAE is telling a different story,” said JCE member Jean Candiotte, an American citizen residing in Dubai.

Rabbi Sarna first traveled to Abu Dhabi in 2009 after he was invited by John Sexton, then president of NYU, to visit the new NYU campus in the UAE capital. He agreed on one condition: that he would not conceal his Jewish identity in any way.

“I accepted but I was hesitant,” Sarna said on his most recent visit to Dubai during Rosh Hashanah.

He, along with other members of the JCE, gathered together for an intimate lunch at a hotel on the Palm Jumeirah. Signposts labeled JCE were placed, very publicly, in the corridors of the hotel directing members to the lunch. A feeling of change lingered in the air as the community members celebrated their holiday. Following the Israel-UAE normalization agreement there was the hopeful sentiment that the region was on the brink of cultural transformation.

“At the time I had no experience of the UAE or of Arabs apart from Palestinians during my time in Israel,” recalled Sarna of his first trip to the UAE.” Sarna had been collaborating on interfaith activities with the iman at NYU several years prior, and the two travelled to Abu Dhabi together.

Traveling to the UAE as a Jew, he said, forced him to confront his fear of being a Jew in the Middle East.

“During my first trip to the UAE I was in the supermarket with the iman and I experienced this intense fear,” he said. “The iman had briefly left, and I was alone for the first time. This wave of fear came over me—the fear of being a Jew in the Arab world.”

This experience forced him to confront his stereotype of Arabs.

“We are very deeply conditioned by fear on both sides,” said Sarna.

Sarna suggested that “tens of thousands” of Jewish youths from Israel and around the world should be sent on Birthright-like trips to the UAE to help overcome such fears.

Kriel notes how many commentators have described the Abraham Accords as a “warm peace.”

“This would explain the extent of the emotion here in the UAE, Israel and throughout the Jewish world,” added Kriel. “In fact, they are a facet of a deeper re-ordering of how we view each other which is indeed warm and allows us to hope (and also work) for sustained progress towards dialogue, understanding and a joyous mutual recognition.”