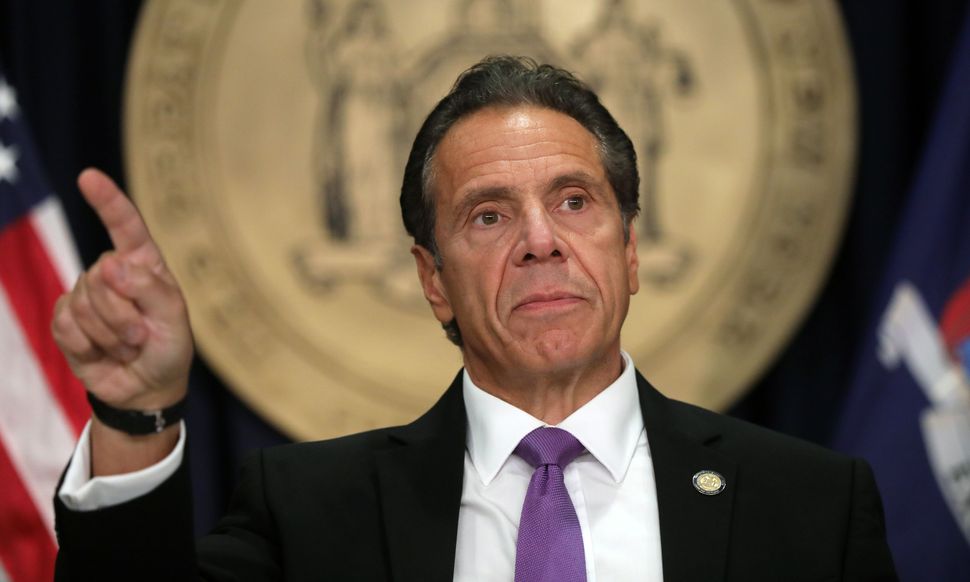 Police officers have failed to break up large gatherings of mask-less people.

Synagogues and schools have stayed open despite being fined $15,000.

Now New York Gov. Andrew Cuomo is trying a new way of getting Orthodox Jewish schools in areas with high coronavirus infection rates to shut down: hit them in the wallet.

An executive order issued Wednesday gives New York the power to withhold any state funds as long as a school is not complying with state rules meant to stem the spread of the coronavirus.

By jeopardizing yeshivas’ bottom lines, Cuomo may have found an effective way to enforce restriction rules, experts say. But the move will also deepen the community’s frustration with the government, and some yeshivas will continue to find ways to try and circumvent the rules.

Eli, a Brooklyn resident who is Haredi, also known as ultra-Orthodox, said he is hosting his son’s fifth grade yeshiva class in his basement, because, while he believes in respecting the law, he also believes that ensuring his son gets a Jewish education is important enough to break it.

To him, it’s civil disobedience in the service of religious expression.

“The financial loss is a very severe threat,” said Eli, who asked to be referred to only by his first name to avoid fines. “But our religion is worth more than money.”

Eli said that the school, which is organizing the shift to out-of-sight basement classes, is taking health precautions by placing plexiglass dividers between each student, and testing them, and their teacher, before classes begin on Monday.

“If we knew, in two weeks this would be done, we would not be doing this,” Eli said, referring to the tentative end-date that the state has placed on the current restrictions. “But we know that it’s very unlikely to be only two weeks.”

In both orange and red areas, however, schools are required to close, which has forced yeshivas in several parts of the New York area — Brooklyn, Queens and Hasidic hubs in Rockland and Orange counties in the Hudson Valley — to move to distance learning.

Because the harshest restrictions center on areas with large Orthodox communities — and because Cuomo has repeatedly referenced those communities when speaking about the restrictions in his press conferences — Orthodox Jews feel that the rules are designed to specifically target their community.

Heshy Tischler, the Orthodox radio personality, channeled some of that frustration into two nights of protest in Borough Park last week. Three bystanders were allegedly assaulted during the protests, including one man who was taken to a hospital, and Jacob Kornbluh, a Hasidic journalist who was allegedly hit by a group of young men after being called a “snitch” by Tischler.

Many in Borough Park feel that the rules are unreasonable, since they close schools where no student has tested positive, and limit prayer gatherings to 10 people even in some of the neighborhood’s largest synagogues, which can seat thousands.

“What is the health benefit of closing down a school with several hundred kids, and having them play in groups in front of your stoop, and going to peoples’ houses?” said Ezra Friedlander, a political consultant and Borough Park resident, who said there were 60 children in his building.

Some residents have pointed to a general lack of available data from the state and city on the current rates of coronavirus infection, saying that they do not believe that their areas are still the only ones with high rates of positive coronavirus tests.

The city has not released 7-day average infection rates or new cases by ZIP code for several weeks. The state has only released infection data for the ZIP codes with the highest rates of positive test results.

I have asked @NYCMayor to provide 7 day average infection rates and new cases by Zip for 6 wks and have been promised them for 2 weeks. Nothing. First they said they couldn’t do it. Now they just shrug. I haven’t been called for a briefing Q all week. https://t.co/jVU9RJfgpl

In Borough Park, the south Brooklyn neighborhood with a large Hasidic community that is inside one of the red zones, some yeshivas did close down this week — but many stayed open.

The New York City Sheriff’s Department, which is partly responsible for issuing summonses to violators of Cuomo’s rules, has issued 31 civil summonses in Brooklyn since Friday, including 24 in the red zone, according to Joe Fucito, the head of the department. Fucito said that the department does not release identifying information for the summonses, since they are not related to criminal offenses.

On Thursday there was some evidence that Cuomo’s order will have its intended effect. A yeshiva informed parents Thursday morning that school was cancelled “due to unforeseen circumstances,” Gothamist reported.

Another school said it would no longer offer preschool classes as childcare due to “comments and threats” from Cuomo, who said the state knows how to distinguish between the two. State rules consider child care an essential service, and childcare providers were allowed to continue operating, leading some yeshivas to claim exemption from the restrictions as childcare centers.

Cuomo has long taken issue with what he has characterized as a lack of enforcement of existing coronavirus rules in New York City. By targeting public funding sources for yeshivas, he has created a possibly more effective method than fines to bring private Jewish schools into line, according to Naftuli Moster, the head of Yaffed, a nonprofit focused on improving secular education in yeshivas.

The funding is not direct, but comes in the form of money for programs, such as for academic intervention services, for books or for nutrition.

Yet the holdouts may shirk even this most recent order, motivated by a wish to continue with life as usual, said a Boro Park Jewish community official, who spoke on the condition of anonymity because he was not authorized by his organization to speak publicly.

“Right now, the community is not in a mode of wanting to cooperate with a government that it sees as tyrannical, irrational and uncollaborative,” the official said. Already this week, the community has organized to assist the few institutions that have received fines.

“The fines are happily covered by rich community members,” said the parent of a child who attends a Borough Park yeshiva, who spoke on condition of anonymity to protect their family’s reputation within the community. “I know someone who was asked to cover for one school. People are throwing money at it, it’s like an honor to do it.”

Hana Cohen, a Hasidic Borough Park resident, said that the community is under the impression that communal funds will be used to cover fines for various institutions, but she expects the institutions to try and contest the fines.

The new rules could bring legal challenges from the Orthodox community.

Avi Shafran, a spokesperson for Agudath Israel, said in an email that the organization has not “been asked to offer any legal advice to any fined institutions.”

When asked if the organization was considering mounting a legal challenge to the latest order cutting state funding to noncompliant schools, Shafran said “we are exploring our options.”