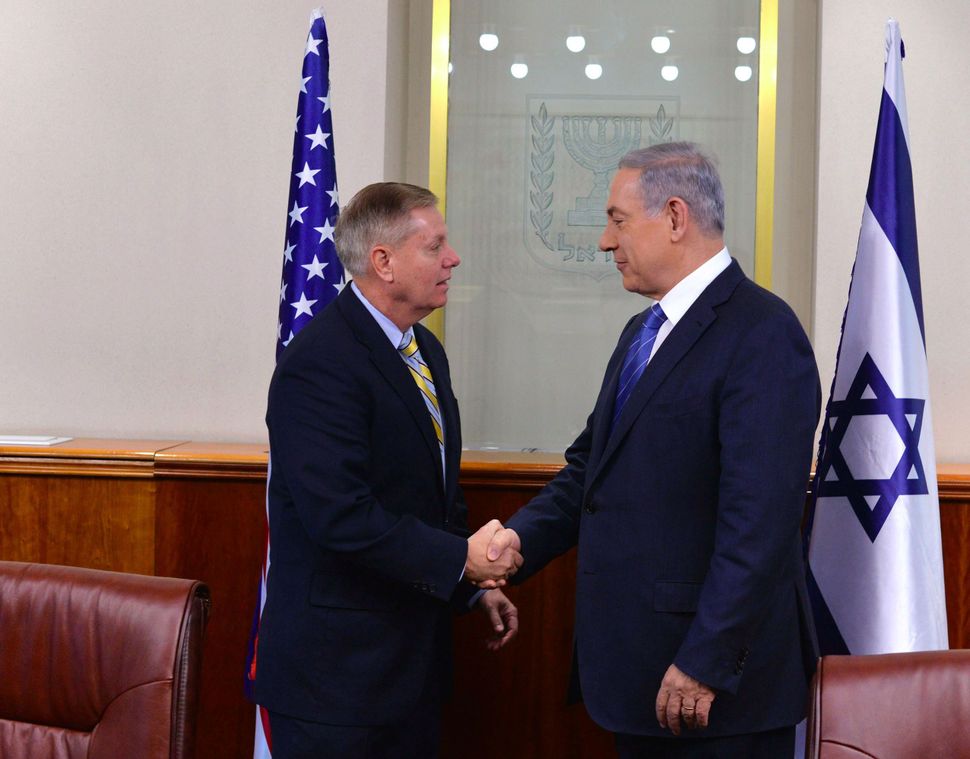 South Carolina’s population of some 5 million people is only about .3% Jewish.

Yet the biggest player on behalf of the incumbent in its Senate race — the most expensive in the country — is the Republican Jewish Coalition. That race is also a big priority for J Street, the progressive Israel advocacy organization.

“This is a national race with national implications,” said Matt Brooks, the RJC’s executive director. “It’s not just about the local South Carolina Jewish community.”

Through the RJC, South Carolina incumbent Sen. Lindsey Graham has raised $79,474 for use in his high-profile race against newcomer Jaime Harrison, according to the Center for Responsive Politics, a non-profit, non-partisan organization that tracks money in politics.

The Center for Responsive Politics arrived at that number by adding contributions from the RJC’s various political action committees and donations by individuals associated with the RJC, from members to employees, between 2015 and Sept. 3, the date of the most recent filings available from the Federal Election Commission. Senators run for re-election every six years; Graham last ran in 2014.

That number seems small by comparison with Graham’s total war chest of $55 million; even so, donations through the RJC make up Graham’s top contribution, according to the Center for Responsive Politics. The group through which Graham received the second-highest amount — $30,300 — was Blackstone, the investment management company.

Yet Harrison has raised even more than Graham — $85 million.

This explosion of money in South Carolina’s Senate race is the result of Graham’s close association with President Trump and his role in confirmation hearings for Judge Amy Coney Barrett, who was appointed to fill Justice Ruth Bader Ginsburg’s seat on the Supreme Court, political analysts say.

In 2016, Graham, a staunch conservative, voted for an independent presidential candidate, Evan McMullin, rather than Trump, yet the senator has become one of Trump’s closest allies and most persistent defenders, rounding the cable news circuit after every Trump controversy, from the president’s disparagement of Arizona Sen. John McCain to the impeachment trial earlier this year.

Harrison has painted Graham as an unprincipled politician who has sacrificed the state for his political career. He shattered the Senate campaign fundraising record last quarter, which made the race in South Carolina, one of the most solidly red states in the nation, competitive, said forecasters like FiveThirtyEight.

That, in turn, propelled more Jewish involvement on both sides.

The RJC itself has donated the maximum amount allowed under campaign contribution rules, $10,000, Brooks said.

As of Sept. 3, the single largest source of Harrison’s contributions are political action committees and donations by individuals associated with Alphabet Inc., a tech conglomerate that is the parent company of Google. They have donated $300,938 this election cycle, according to the Center for Responsive Politics.

Logan Bayroff, a spokesman for J Street, said that Graham is an “enabler” of Donald Trump who is “out of step” with Jews who want peace in the Middle East. Meanwhile, he said, Harrison has indicated his support for the Iran nuclear deal, and has opposed unilateral annexation of the West Bank.

“Lindsey Graham has been one of the most hawkish, right-wing members of the Senate for a long time,” he said.

The RJC has a history of supporting Graham.

Sheldon Adelson, another member of the RJC’s board, co-hosted a fundraiser for Graham’s exploratory committee for a 2016 presidential run.

“There is nobody more important in the United States Senate in terms of advocating for a strong U.S-Israel partnership,” said Brooks. “As a result, it would be a catastrophic loss for our community if Lindsey Graham were to lose his election.”