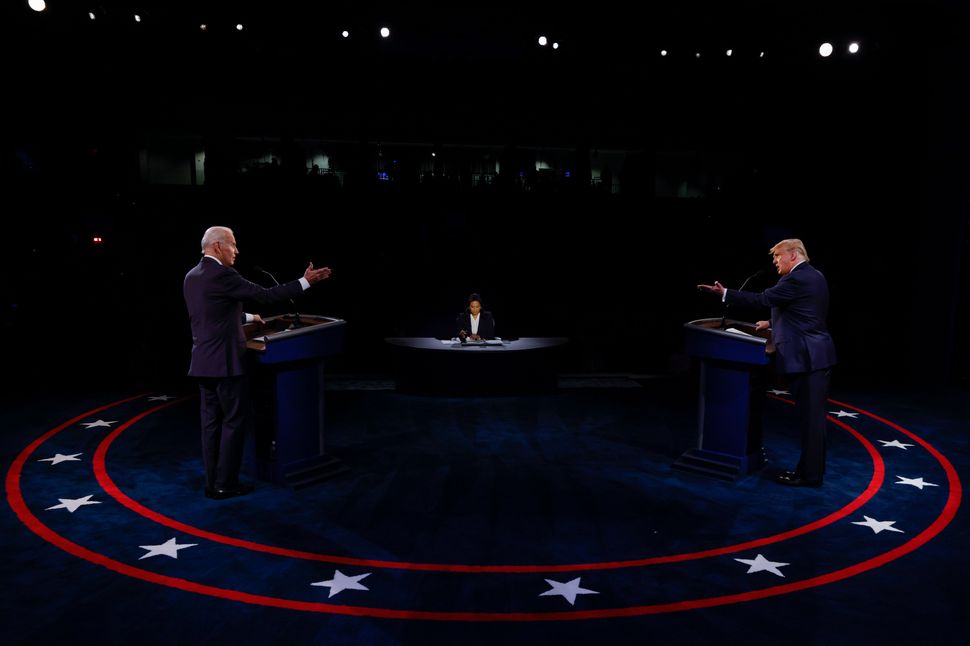 Throughout the turbulent last four years, various pundits have predicted either that President Donald Trump could attract unusually high numbers of Jewish votes during the 2020 election cycle — or lose many of the ones he had in 2016. As American careens toward a historic Election Day, the picture remains a bit muddled, with news coverage of Orthodox protesters waving Trump flags juxtaposed against groups like Jewish Unity PAC contributing tens of thousands of dollars to the president’s Democratic challenger, former Vice President Joe Biden.

A poll published last month by Jewish Electorate Institute said that 67% of Jewish voters were supporting Biden and 30% Trump, a shift of four points in favor of the incumbent from the 2016 breakdown between Trump and Hillary Clinton.

We took a look back at the Jewish vote in presidential elections since 1972, based on data from the Jewish Virtual Library. American Jews have consistently favored Democrats by large margins, but there are a few interesting peaks and valleys.

Kenneth Wald, a professor of political science at the University of Florida and the author of “The Foundations of American Jewish Liberalism,” said the drop in Jewish support for the Democrat was largely explained by the “widespread dissatisfaction with President Carter” among Democrats generally, but that there was also a “perception that he was more sympathetic to the Palestinians than to Israel.”

Early in President Carter’s term in the White House, he called for a “Palestinian homeland,” and in 1978, he proposed the sale of a figher aircraft to Saudi Arabia, a move strongly opposed by Israel. Carter’s Jewish liaison, Mark Siegel, resigned in protest over the latter episode.

The shift in Jewish votes to the Republican can also be attributed to Reagan’s strong record on Israel and antisemitism: Before running for office, he resigned from a country club in Los Angeles because it did not admit Jews, and spoke out in support of Israel during the Six-Day War in 1967.

In looking at the period from 1972 to the present, Jews voted roughly 2:1 Democratic for the first five elections. But the 1992 election represented a cementing of Jewish Americans’ support for the Democratic Party.

Wald, the University of Florida professor, said that Jews had begun to chafe at the Democrats’ policies supporting affirmative action because many saw it as an abandonment of the “general position that government benefits and costs should not be based on race, religion or ethnicity.”

But the rise of the Christian right in the 1980s and 1990s and its influence on the Republican leadership made the Republican party an inhospitable home, Wald said.

George H.W. Bush got 35% of the Jewish vote in 1988, when he beat former governor of Massachusetts, Michael Dukakis, in a landslide. In 1992, that Jewish support dropped by more than two thirds.

Jews “began to see another threat to the classical liberalism that had been their religion in a way, and that was the emergence of Christian conservatism as a political movement,” Wald said. “That movement into the Republican party of Evangelicals really stopped any Jewish progress toward Republicanism.

“White Protestant Evangelicals today are as Republican as Jews are Democratic,” he added.

Herb Weisberg, a political science professor at Ohio State University and the author of “The Politics of American Jews,” said Jews also turned away from President Bush and towards Clinton out of a sense that the incumbent’s “policies, particularly in the Middle East, were not going to be that positive towards Israel.”

An episode in 1991 during which Bush’s Secretary of State, James Baker, allegedly responded to criticism of his approach to Israel by saying “Fuck ‘em. They didn’t vote for us” stood out for some Jews as another reason to turn out for Clinton in 1992.

But Wald said that a study he did found that the Romney data, which relied on exit polls, did not properly weight the sample for the distribution of the Jewish population. In other words, during the Romney exit polls, pollsters spoke to more Jews from conservative states that represent a smaller share of the country’s Jewish population than they did during other elections.

(Data from other election years had a sample that better represented the spread of Jews across the country, with Jews from liberal states polled in a way that was more consistent with their numbers nationwide).

He and another researcher corrected for that and weighted the Jewish subsample.

The 2012 polling, he found, “made it look like more of a surge than it was” for Romney, and the new weighting showed analysis ought “not make too much of that apparent increase” which was not as “dramatic” as it originally appeared.