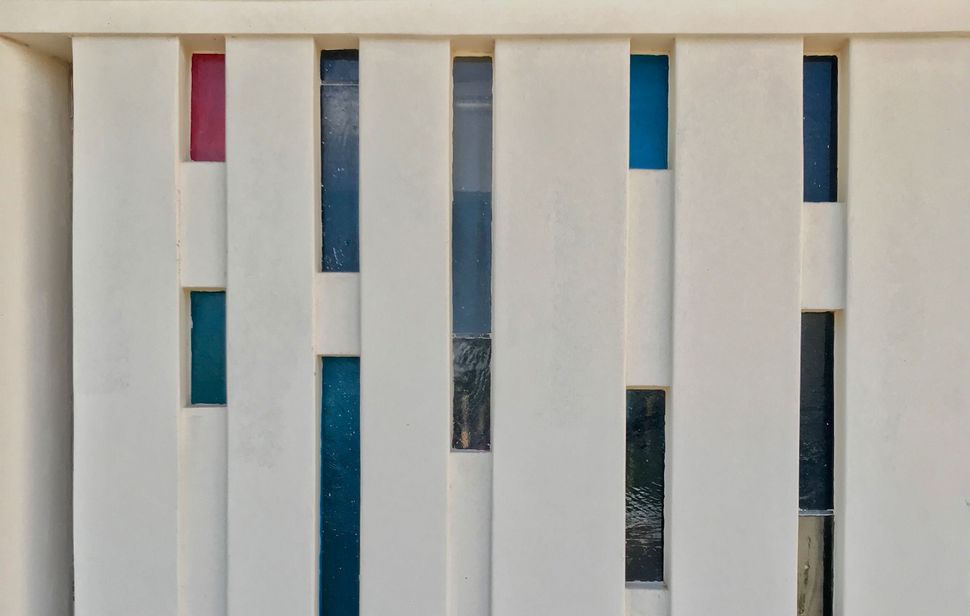 Blue and red stained glass decorates the facade of Temple Mt. Sinai in El Paso, a congregation that has grappled with political division for years. Image by Arno Rosenfeld/The Forward

With just days left before the presidential election, Rabbi Ben Zeidman’s inbox has been filling with emails from congregants offering conflicting answers to the same set of questions.

“Who’s better for Israel? Who likes or hates the Jews? Who’s courting antisemitic leaders?” Zeidman said. “You replace one political party leader with another — one presidential candidate with the other — and it’s the exact same email.”

Temple Mt. Sinai, a Reform congregation of about 300 families, is perched above El Paso in a modernist structure invoking the synagogue’s Biblical namesake, and the mountains that ring this town on the border U.S.-Mexico border.

When Zeidman arrived five years ago, he found a congregation already split down the middle by politics. Hillary Clinton won El Paso by 43 points. But Texas is still a GOP stronghold. Liberal activists rubbed shoulders with local Republican leaders at Shabbat services and people tried to conceal their political views.

Early on, Zeidman heard again and again from congregants that nobody else at the temple shared their politics. He used that as a jumping off point for his first High Holiday sermon.

“I said that you are not alone and there are people around you in this congregation — in this sanctuary right now — who feel the same way you do,” he recalled. “And the other half of the people feel the opposite.”

With that caveat, Zeidman turned Mt. Sinai away from politics for a time: no candidate forums, no voter drives, no wading into the immigration debate that swirls around El Paso due to its location along the Rio Grande.

“There was a need for us to work on ourselves,” Zeidman said.

‘Sanctuary from the chaos’

Zeidman learned little tricks, like running emails on contentious topics by conservative members before they went out to ensure they didn’t read as too political, and made sure not to pick sides when it came to the outraged messages he received from congregants.

But on a deeper level, he learned why despite sharing many of the same Reform Jewish values his congregants found themselves supporting diametrically opposed policies and politicians. He learned how people chose to prioritize one issue over another and how that informed their vote.

“I see a world of gray,” Zeidman said.

Zeidman tried to balance machloket l’shem shemayim, a Hebrew expression meaning argument for a higher purpose, with respite from that conflict.

That tactic seemed to work. The congregation became ready to step off the sidelines.

Judaism didn’t tell Zeidman much about whether the United States should have open borders or build a towering wall. But having children languish in cells, sleeping on the floor with no blankets, no soap, no ability to wash, catching the flu? The Trump administration’s family separation policy launched in the spring of 2018 transcended policy debates, Zeidman said.

The congregation is also active in the least partisan element of the Union for Reform Judaism’s civic engagement campaign: aiming to become a 100% voter turnout congregation.

Now with less than a week before polls close, Zeidman doesn’t expect the end of election season to ease tensions at his congregation. He allowed that a president who fired off fewer inflammatory Twitter messages might help calm the national discourse. But either way, during a four-year period in which the United States has seen escalating political divisions, Temple Mt. Sinai seems to have reached an equilibrium.