Campaigns can tell you’re Jewish. Here’s how they target you. 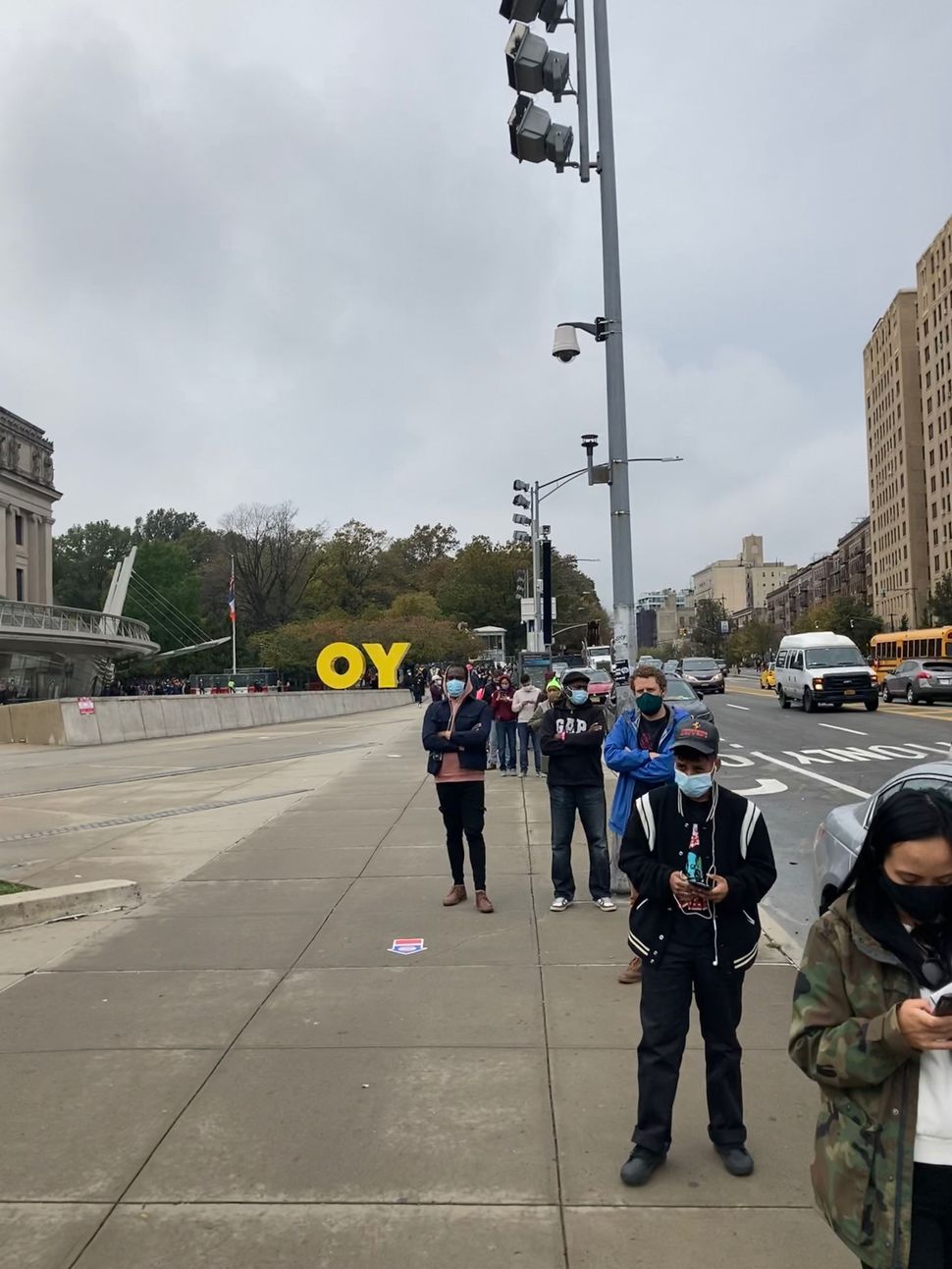 The early voting line by the Brooklyn Museum on Wednesday, October 28. Image by Mira Fox

A hand places stones atop a grave in the classic Jewish ritual of remembrance. The audio mixes the Jewish prayer for mourning with clips of President Donald Trump minimizing the dangers of COVID-19.

The video by the Jewish Democratic Council of America is following Jewish voters around the internet on social media, news and shopping websites. It finds its targets based on one of the custom lists that Jewish political groups use to call, text and email voters. And yes, creating the lists is painstaking, expensive work — but it must be done, strategists say.

“Voter lists and grassroots outreach is the least sexy part of any campaign but it is arguably the most important,” said Matt Brooks, executive director of the Republican Jewish Coalition.

If you’re on one of these lists, some campaign groups even know whether you’ve received an absentee ballot and whether you’ve returned it — allowing them to tailor messaging in the final days of the election.

Every major campaign uses lists to track voters and target distinct messages to groups like seniors, women, progressives, and interest groups like gun owners. But Jews are much harder to identify.

“It’s very expensive to find Jews in research because they’re like 2.5% of the population,” said Laurence Kotler-Berkowitz, director of the Berman Jewish DataBank. “If you’re just randomly searching for Jews by calling people on the telephone, it’s going to take a long time.”

Instead, Jewish groups must start the work of identifying their targets by by purchasing lists of voters from companies. These operations claim they can determine religious affiliation by combining voter registration information with credit reports and other data.

But these lists are expensive — some cost hundreds of thousands of dollars — and often terrible at identifying Jews. In many cases, they catch only 30% of Jewish voters, according to the Pew Research Center.

“The reality is anything off the shelf — just the voter files — is garbage,” said Brooks.

That means a lot more must be done, even after a group decides to make the investment a buy a list.

Halie Soifer, executive director of the Jewish Democratic group, says her organization works with a firm that uses algorithms and demographic models to come up with a more accurate list of Jewish voters, including around two million in swing states.

The JDCA volunteers who use the list to campaign for Democratic candidate Joe Biden, say, don’t ask voters on the list if they’re Jewish. But Soifer said she believes it’s a good list.

“It’s not a perfect science,” Soifer said. “Anyone who tells you they have a perfect Jewish list probably doesn’t.”

Brooks doesn’t claim to have a perfect list — but he says it’s close. After years of using generic lists, like those provided by the Republican National Committee and the Koch-funded company i360, Brooks said his group decided to create its own custom file for this year’s election.

He said the Republican group assembled “all the right propeller heads” — a team of data scientists, demographers and statisticians — to laboriously refine voter rolls to more accurately match religion.

That included tactics like searching for voters who lived within 1.5 miles of Orthodox synagogues in battleground states on the premise that observant Jews are both more conservative and usually live within walking distance of synagogue.

Unlike the Jewish Democrats, RJC canvassers do ask voters their religion, Brooks said, and since creating its own custom list 75% to 80% of voters they reach are Jewish, up from just 20% to 25% in previous years.

He believes that despite the high upfront cost, the organization has “cracked the code” and its new list will pay dividends in future election cycles, allowing its Jewish message to reach more Jewish voters.

For example, the group used its database to promote a video on Facebook touting President Trump’s record on Israel that was seen more than 250,000 times by voters in the crucial swing states of Florida, Pennsylvania and Arizona this summer.

At a time when many voters are being inundated with calls, emails, texts and advertisements, a message from a group they identify with often stands out. That was the case for Shanie Reichman, who recently received a phone call from a Jewish Democrat.

“I wouldn’t have responded to a non-Jewish (organization),” Reichman said.

But the New York City-based think tank analyst was happy to tell the volunteer that she had already cast her ballot for Biden.

“I’m kind of proud that there are so many Jewish groups getting the vote out,” Reichman said. “I want to empower them.”

Campaigns can tell you’re Jewish. Here’s how they target you.