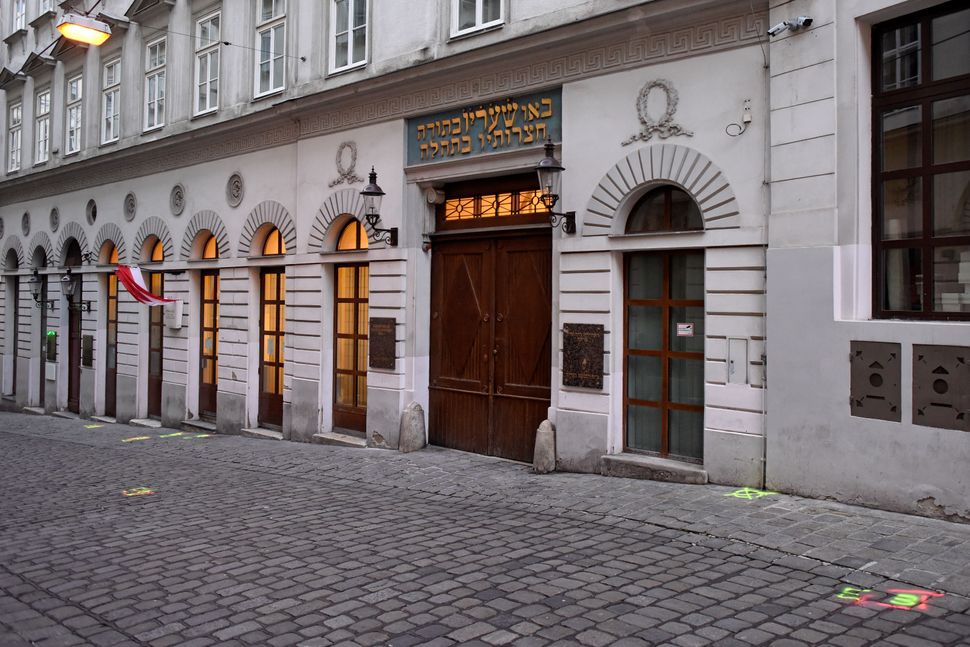 Outside Vienna’s main synagogue after the deadly shooting on Nov. 3. Image by Thomas Kronsteiner/Getty Images

Rabbi Lior Bar-Ami had just wrapped up a board meeting on Zoom with members of Vienna’s liberal Jewish community Or Chadasch when he received a phone call.

It was one of the board members, calling him to say that shooting had broken out in the area of Vienna near the city’s main synagogue on Seitenstettengasse. The board member knew this because his son was working as a waiter in a restaurant in the vicinity of the attack. “He immediately locked up the restaurant, turned off the lights, and helped move everyone to the back of the restaurant where they were safe,” Bar-Ami told me. 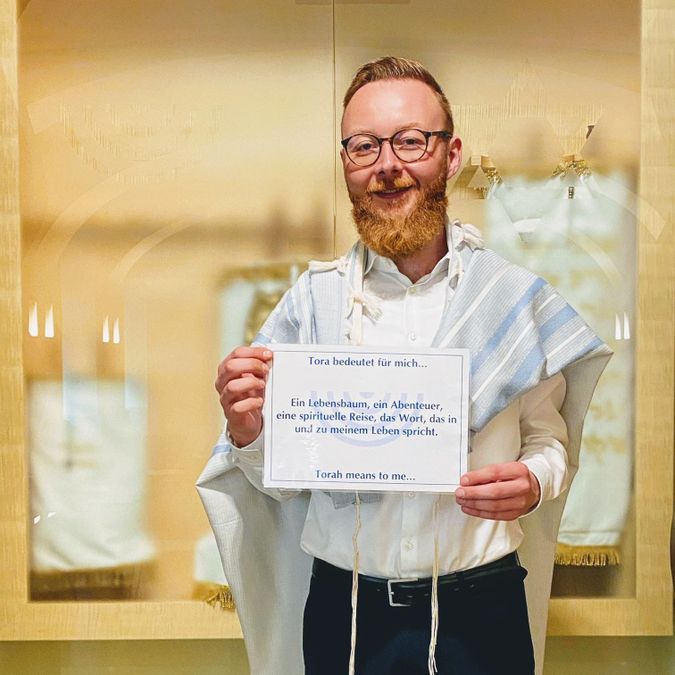 This board member was not the only one of Bar-Ami’s congregants to have some connection with a night of terror in Vienna which, as of writing, has left four people dead and 22 injured. Another member of Or Chadasch was dining in a restaurant on the other side of the street to the one the board member’s son was working in. They, too, hid in the restaurant until it was safe to leave. Bar-Ami told me the past 24 hours of his life have been dominated by pastoral work, speaking with members and congregants until the wee small hours of the morning.

Milli Segal, a PR advisor, had the good fortune to be out of Vienna on a skiing vacation with her grandchildren at the time of the attack. Her ex-husband, however, lives in the city’s first district. About 10 minutes before the first shots rang out, he left his apartment and went to Café Korb, one of the city’s most beloved coffeehouses, Segal told me, on the last night restaurants and bars were allowed to be open before Austria’s second lockdown began at 12:00 am Tuesday. “I was really frightened for him. I couldn’t sleep. I was up until 3 o’clock in the morning,” Segal said, the events in Vienna jarring amidst her peaceful surroundings. 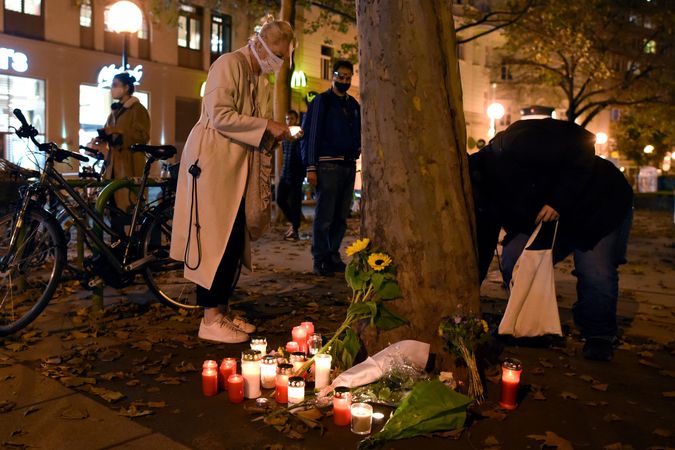 People places candles in the city center the day after a deadly shooting spree on November 03, 2020 in Vienna. Image by Thomas Kronsteiner/Getty Images

Segal was bombarded with messages from friends and family in the United States and Israel asking after her and her family. Bar-Ami had much the same experience, he said.

“I’ve been on calls almost all day and all night. Immediately following the attack, I was called by several members [of Or Chadasch] and several members of congregations in France and other places where I used to work. We sent out a newsletter to community members informing them about what happened, as did the Orthodox community this morning, and we have held two community forums—one at 10:00 a.m., one at 4:00 p.m.—so that people can get together and express their feelings about what happened.”

Of the congregants Bar-Ami has spoken to, generally people were calling him “expressing their fears, their insecurities, and their anxiety about the situation,” especially given the confused reporting that emerged in the fog of the incident in the immediate minutes and hours after the first shots were fired.

Immediate reports of deaths and injuries following an assault on the Seitenstettengasse synagogue itself proved unfounded, and as far, no injuries have been reported within the Viennese Jewish community, its president Oskar Deutsch said late Monday night. It also remains unconfirmed that the synagogue was the assailant’s direct target.

The liberal Jewish synagogue Or Chadasch is one part of a Jewish community in Vienna, between 8- and 10,000 people strong, best described as a mosaic. Its reconstruction after the devastation of the Holocaust was undertaken by a core of Holocaust survivors and their descendants, the so-called second generation. Over the following decades, their ranks were swelled first by refugees from central and eastern Europe, Poland and Hungary, and then, beginning in the 1970s, Jews from Georgia and Bukharian Jews from the central Asian republics of the former Soviet Union who left in search of religious freedom and better economic prospects.

Though the Seitenstettengasse synagogue is in the first district, the majority of the Jewish community lives on the other side of the Danube Canal. The second district has long been regarded as the city’s de facto Jewish district and it is where many of its synagogues—some 20 in all, including Or Chadasch—schools and kosher supermarkets are located. The Stadttempel was the only synagogue to survive Kristallnacht in November 1938. This is a Jewish community that has known terror before, not only during the Nazi period, but also in August 1981 when, on a Shabbat morning, members of the Abu Nidal terror organisation launched an assault on the Stadttempel using machine guns and hand grenades, killing two people and injuring 18 others, including three children.

There is in the story of Vienna’s Jewish community both immense tragedy and resilience. Lara Guttmann, co-president of the Austrian Union of Jewish Students, told me that Jewish students in Vienna are planning to organise a solidarity rally in the centre of the city as soon as the police allow it—hopefully this week. She was at home in the first district when the attacks began, first hearing about the terror from a friend of the family who owns a restaurant in the area where four people were killed and 22 injured. From the family home, where she has remained since the attacks, she observed police armed with machine guns roaming the streets in an attempt to secure the area. 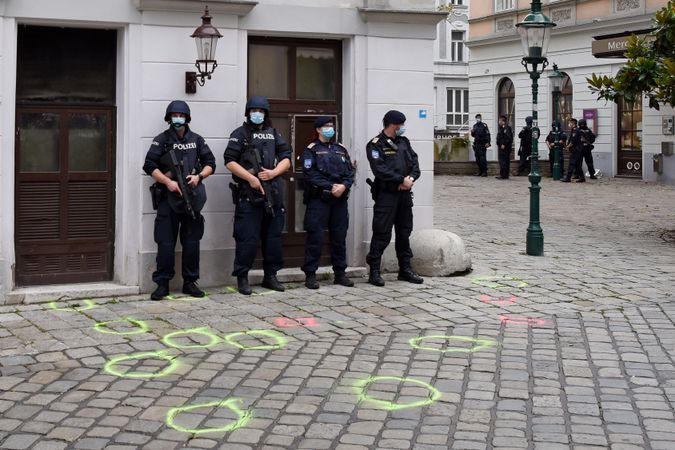 Police guard the crime scene the day after a deadly shooting spree in Vienna, AT. Image by Thomas Kronsteiner/Getty Images

“A few friends of mine in the Austrian Union of Jewish Students were dining in restaurants really close to where the attacks took place” and had to shelter-in-place there until it was safe to leave, Guttmann said. Another colleague in the students’ union was studying in her university’s library, where she remained until 7:00 am this morning.

Members of the Austrian Union of Jewish Students have been in touch with each other via WhatsApp, sharing their experiences and snippets of information including videos recorded in the confusing hours after the attacks began. “When rumours spread that it might be an attack on the synagogue, it was really scary, especially because my brother was still around there, around 500 metres away” at around 8:00 p.m. last night, Guttmann said.

All Jewish institutions including synagogues, schools, and kosher supermarkets remained closed 24 hours after the attack. The community announced at 5:49 p.m. that they planned to re-open tomorrow. The insecurity in Vienna combined with the coronavirus outbreak and the second lockdown, however, means it is unclear when Jewish life can resume in full.

Rabbi Bar-Ami said he will tell his congregants it is safe to cease sheltering-in-place as soon as authorities deem it safe. “In general we have advised people to stay inside not only because of the terror but because we are in the middle of a pandemic,” he said.

Services in his shul have been moved online. And there, for now, they will remain.