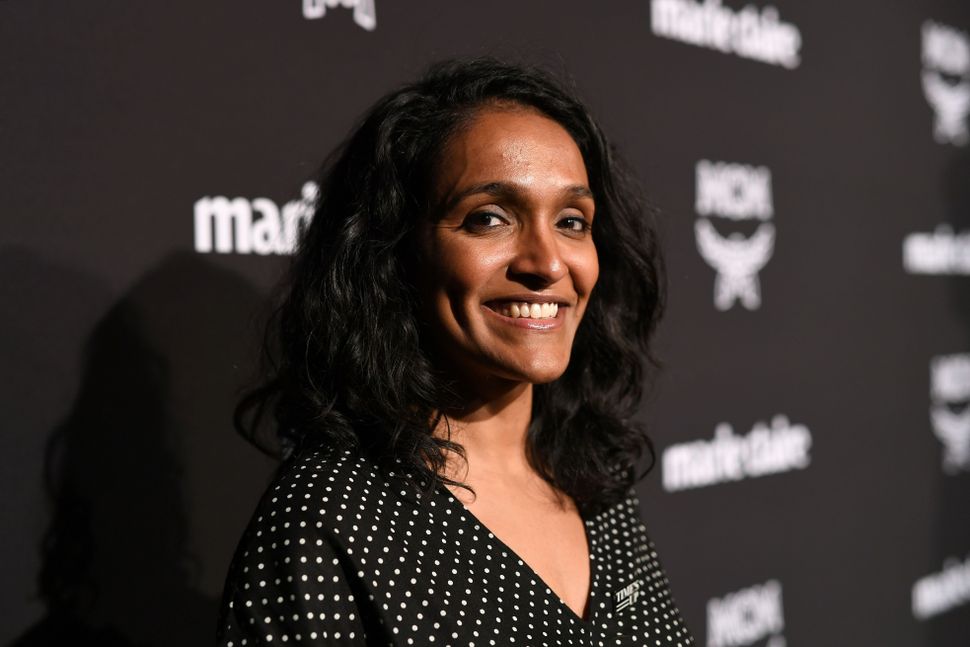 Democratic-leaning as it is, Los Angeles moved a bit further to the left last week as young Jewish progressives joined like-minded activists to help a candidate supported by the Democratic Socialists of America win a seat on the 15-member City Council.

Nithya Raman, an urban planner from India in her first run for public office, defeated one-term incumbent David Ryu, in part through the campaign efforts of the DSA’s local chapter, which is heavily populated by young Jews drawn to her policy positions as an extension of values they say they learned early in their lives.

Raman, who won the endorsement of the U.S. Senate’s most prominent progressive — Bernie Sanders of Vermont — campaigned for more effective solutions to homelessness, more affordable housing, police reform and sanctuary protections for the city. She won 52% of the vote. 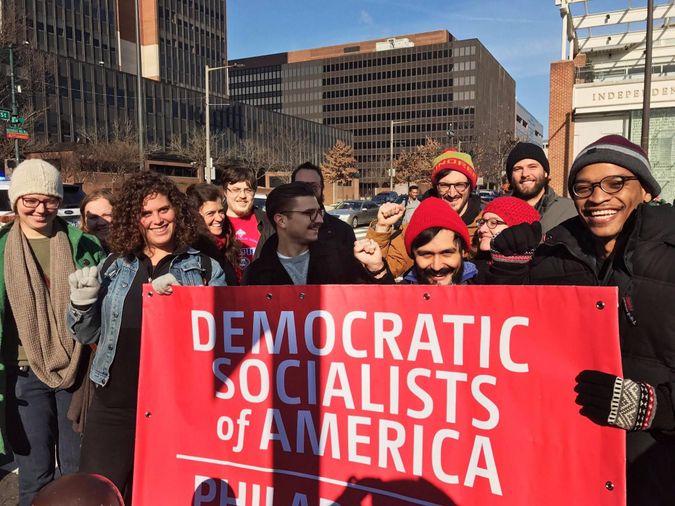 “There’s a real tradition of progressive policies coming from Jewish identity,” said Alex Wolinetz, a 30-year-old New York transplant who served on the LA chapter’s campaign working group. “A lot of young Jews have become involved in the progressive movement at large. Tikkun olam means healing the divisions we have,” he said, using the Talmudic expression for healing the world. “The idea of ‘people not profits,’ and welcoming the stranger resonates with us.”

Founded in 1982 and based in New York, DSA is one of the largest progressive political organizations in the country, with 231 local chapters and a membership that reached 81,000 through the recent elections, said Chris Kutalik Cauthern, the DSA national spokesman. Jewish members, he said, constitute “a large number of us.” He did not have an exact count.

DSA advocates for reforms within capitalism that shift more power to working people while reducing the power and influence of corporations. While pro-labor, anti-racist and anti-fascist, DSA has endorsed the BDS Movement, which is widely condemned by Jewish groups as anti-Zionist and antisemitic. In a questionnaire from Democrats For Israel — Los Angeles before the election, Raman said she opposes the BDS Movement and supports Israel’s right to exist but does not oppose “how one chooses to spend their money or peacefully engage in political activity protected by the First Amendment.”

This year, DSA endorsed 40 candidates at various levels of government, and 29 of them won, including two members of “The Squad” — Rep. Alexandria Ocasio-Cortez of New York and Rep. Rashida Tlaib of Michigan — and incoming House members Cori Bush, who becomes the first black woman to represent Missouri in the House, and Jamaal Bowman of New York, who upset 16-term Congressman Eliot Engel in a June primary. 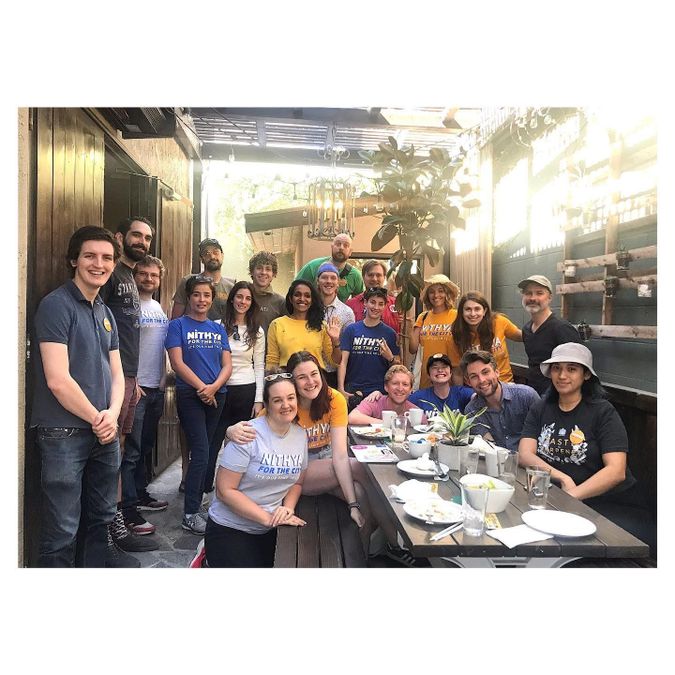 Nithya Raman with her canvas team in February Image by Facebook

Raman was one of several progressive candidates in the L.A. area who won last week, along with George Gascón as L.A. District Attorney, State Sen. Holly Mitchell as a County Supervisor and Konstantine Anthony, an actor and comedian who captured a seat on the Burbank City Council. Burbank is a city within L.A. County.

The strength and influence of DSA-backed candidates, as well as the progressive movement itself, remains an open question, however. Joe Biden’s victory over President Trump, in part, reflected the willingness of Sanders and other members of the Democratic left to set aside their own policy preferences to help ensure Biden’s success. Now, they’re pushing Biden to bring progressives and platform positions like more aggressive stands on climate and healthcare coverage into his new administration. Their efforts become that much harder if Republicans win at least one of two runoff elections in Georgia to maintain control of the Senate.

Further, moderates and progressives are arguing over which group cost the Democrats seats they lost in the House and why Democrats weren’t more successful appealing to Latino voters.

The same uncertainties hold true in Los Angeles, where the Council is composed of 13 other Democrats and one independent. Zev Yaroslavsky, a former councilman and county supervisor, told the Los Angeles Times last week that Raman’s victory represents “a political earthquake” for the city in its power to energize more young voters for 2022, when eight seats will be contested. This year there were only two.

“Anybody at City Hall who doesn’t recognize the significance of this election is making a mistake,” Yaroslavsky told the Times.

Beyond that, said Raphael Sonenschein, executive director of the Pat Brown Institute for Public Affairs at California State University, Los Angeles, Raman’s victory is likely to encourage other progressives to run for the Council in two years.

“Big cities like L.A. are clearly surging toward progressive.” he said, describing the district Raman won as “moderate or center-left just four or five years ago.”

Emma Soren, 26, a television writers’ assistant from Deerfield, Illinois, who is not a member of DSA, she said she volunteered for Raman’s campaign in part because Raman’s policy positions dovetailed with her own Jewish values.

“I hope she’s not a one-off,” Soren said of Raman’s success in L.A. politics. “I hope there are more candidates to follow.”

While that will take time to sort out, Raman’s work history provides a template for future progressive candidates.

Born in the southern India state of Kerala, Raman immigrated to the United States when she was six, living with her parents in Louisiana, then Boston. With degrees from Harvard and MIT, she returned to India, working on issues related to slum dwellers and low-wage workers fighting for such necessities as running water, toilets, protection from evictions and better working conditions, according to her .

In 2013, she joined her husband in Los Angeles and worked in city government. One of her assignments was writing a report on what the city was spending on homelessness.

“What I found in my research shocked me,” she said on her campaign website. “The city was spending over $100 million on homelessness — and almost 90% of that money was being spent on jailing people experiencing homelessness. Very little, meanwhile, was going toward services, outreach, treatment, and other effective paths to stable housing.”

After having twins and turning her efforts to neighborhood issues, she decided to run for the City Council, focusing on homelessness.

“We went very in for her,” said Kutalik Cauthern, the DSA spokesman. “We did four or five phone banks a week. We did fundraisers, literature drops. We even did opposition research. We put in a lot of work for her.”

Wolinetz, the DSA campaigner, said Jewish support for progressive candidates is only likely to grow stronger as young Jews look for places of political activism, like DSA, where they can join others who share their political perspective.

“In a lot of spaces, we’re not accepted,” he said. “How are we going to feel safe about our progressive values when structures are moving from center to right? Thirty years ago, you could go to your synagogue. Now, they’re not open to people more progressive. For lots of Jews, DSA is a place for our progressive values.”