Praying through the second wave: Expert advice on staying safe 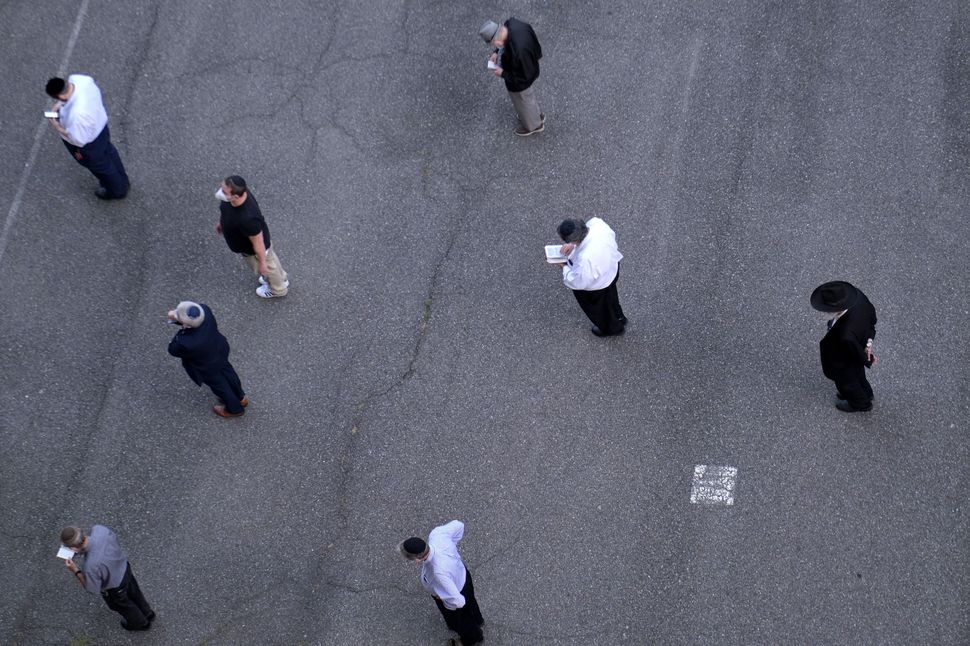 This winter, a lot of observant Jews are going to become the frozen chosen.

Here’s how Dr. Moshe Cohn, who lives in the Orthodox hub of Teaneck, N.J., got dressed for weekday prayers on a recent cold day: He wrapped his tefillin, the ritual leather straps, around his arm and head. Then he put on an insulated vest and a loose-fitting sweater, followed by his tallit, or prayer shawl, and a winter coat on top.

The final touches: a face mask and gloves compatible with a touch screen. (His siddur is on his smartphone.)

“And everybody else in the minyan looked exactly the same,” he said.

Temperatures are dropping, and coronavirus cases are surging. After a summer and fall which saw some in-person gatherings, synagogues are now trying to decide when and to what degree they must shut down again during the winter.

Some are contemplating a return to no services whatsoever, as at the height of the pandemic. Others are considering setting up heated outdoor tents to pray in person through the winter.

Health professionals say that clergy and congregants must take every precaution — including avoiding synagogue services entirely.

“A refrain I heard from several synagogues was something along the lines of, ‘But people miss being in shul,’” said Cohn, a pediatric critical care specialist at the NYU Langone Medical Center. “OK, is their family going to miss them when they’re dead? Because that’s what we’re risking here.”

Here are four key pieces of guidance from coronavirus experts on how to approach prayer this winter.

If you’re going to pray, experts advised, pray like you’re dined out in the summer: totally al fresco. That’s where risk of transmission is lowest.

“Outdoors is many times safer than indoors, and by outdoors, I mean fully outdoors — not inside tents,” including with masks and at least six feet of distancing, said Dr. Leana Wen, a professor of public health at George Washington University and the former health commissioner of Baltimore.

The risks indoors are simply too high, experts say.

“Right now, in many parts of the country, transmission is occurring at such a rapid pace, that convening people (particularly adults) in an indoor space to sing and speak for any duration is asking for trouble,” said Dr. Jennifer Weuve, an associate professor of epidemiology at Boston University’s School of Public Health.

Richard Altabe, principal of the lower school at the Hebrew Academy of Long Beach, said that on his block in the heavily Jewish Five Towns section of Long Island, his neighbors all come and stand at the end of their driveways each morning in their coats to pray together.

“You can have enhanced kavanah” — spiritual intention — “and because you’re outdoors you can have a little bit stronger connection to God,” Altabe said.

If you can legally pray indoors, doing so safely requires great ventilation.

When the pandemic crashed over the country in the spring, every synagogue in America closed. Most have remained closed, or will close again as states order further shutdowns to try and slow the onslaught of the second wave.

Yet some states will likely avoid shuttering houses of worship due to religious liberty concerns, and there may be synagogues that continue holding indoor services at reduced capacity.

If they do, they need to have top-notch ventilating systems, said Jiarong Hong, an associate professor of mechanical engineering at the University of Minnesota. Hong has been researching how aerosols carrying the virus move in enclosed spaces.

“If you don’t have a very good ventilation system, and you have a large amount of people gathering in a small space, the build up of aerosols dramatically ups the risks,” Hong said.

Synagogues with high-ceilinged sanctuaries are probably the safest indoor prayer spaces. Hong and his team have been studying aerosol spread in Minneapolis’ Orchestra Hall, which can seat just over 2,000 people and has three balcony levels. Such high-ceilinged spaces can effectively disperse aerosols carrying the virus by carrying them upwards, lowering risk of transmission, Hong said.

Even so, Hong said, keeping the space’s capacity low, along with adequate social distancing and extra ventilation, would be necessary to further reduce the risk of the spread. Hong recommended using ground-level air filters placed throughout such a space to trap airborne virus particles.

Wearing masks and staying six feet apart may not be enough.

Jewish services typically involve talking, in the form of reading the liturgy or from the Torah, and frequently feature a lot of singing — an activity long known to be very high risk for spreading aerosols that carry the coronavirus.

That’s why the length of the service poses considerable risks of transmission, Hong said. While some communities will go through a weekday service in 20 minutes, Shabbat services are usually longer than an hour, making virus transmission more likely.

“The duration of the services and the involvement of singing and collective speaking pose real hazards that masks will help but not completely mitigate,” said Weuve.

In a high-ceilinged space with adequate distancing and ventilation, Hong said, a half-hour service is not very risky. But beyond that, aerosol build-up in the air becomes more likely.

Praying in a tent could be more dangerous than praying indoors.

Some synagogues and religious communities have emulated local restaurants, which have installed tents or similar temporary structures to make outdoor dining more comfortable as the weather has gotten colder.

These kinds of tents have popped up in New York City suburbs with large Orthodox communities, like in the Five Towns.

Altabe, the school principal, said that families living on some of the wealthier blocks in the Five Towns have spent $10,000 or more setting up large tents, complete with heaters, where upwards of 60 people come to pray.

“Necessity is the mother of invention,” Altabe said.

Experts say that an open tent could be safer than gathering indoors. Yet they specify that these kinds of structures can still pose grave risks of transmission, even when congregants are standing six feet apart and wearing masks, if the tent has walls.

Weuve added that, if a tent has four main walls and no ventilation system, it could be an even worse option than praying in an indoor space.

“It’s confined, and there’s no ventilation,” Hong said of enclosed or semi-enclosed tents. “Especially when talking, and even wearing masks, with multiple people in that place, I would be very, very careful.”

Praying through the second wave: Expert advice on staying safe