Advice to the Second Gentleman from a veteran male ‘rebbetzin’ 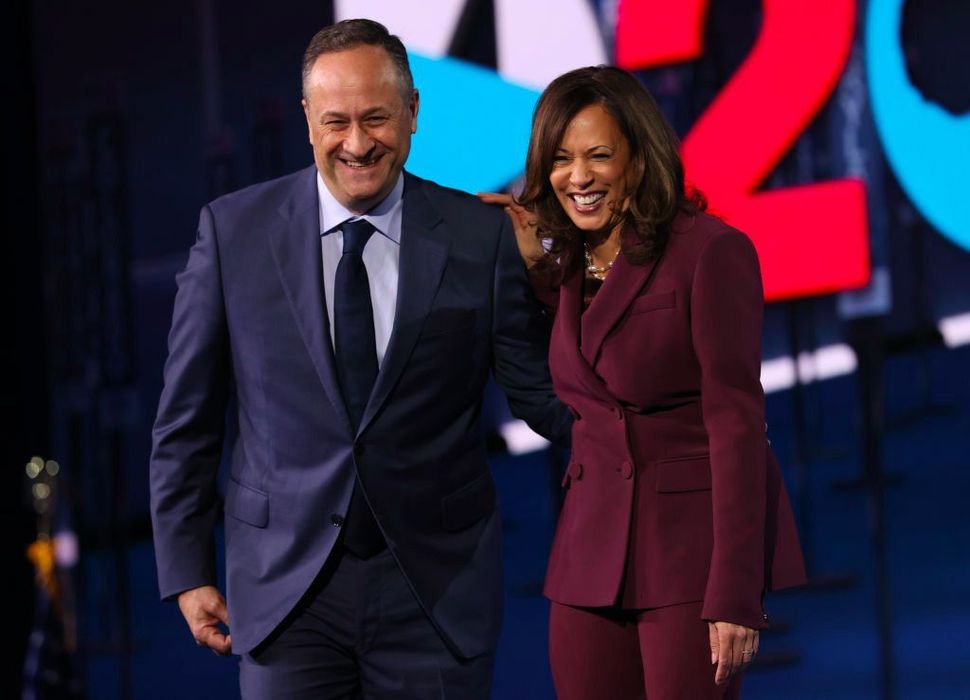 Nobody knew what to call me either.

Just over 30 years ago, I walked into a synagogue in Venice, California, met the rabbi, Naomi Levy, and felt my heart pound. A year-and-a-half later, we were married. She was my Kamala.

Back then, women rabbis weren’t as scarce as Black-Indian female Vice Presidents-elect, but they weren’t exactly plentiful. Just as no one quite knows what to call Doug Emhoff — Second Gentleman? Second Mensch? Mr. Mamaleh? — there wasn’t a word for what I was, either.

“If a wife of a rabbi is called a rebetzin,” someone asked my wife back then, “what do you call the husband of a rabbi?”

There wasn’t a word, and there wasn’t a role. While my wife led a congregation, I pursued my journalism career. But inside shul, what was I supposed to do?

That’s the dilemma Emhoff faces now. I don’t know the man whose wife was just elected to be the next Vice President of the United States.

As the first Second Man in the history of the Republic, he carries the heavy burden of modeling modern husbandry. Doug Emhoff will lead, as it were, from behind.

As if that first weren’t enough, Emhoff is the first Jewish Spouse of any kind to move into a Washington executive mansion. Jewish Twitter has gone giddy over that fact, mostly by turning the Shtick-o-Meter up to 11. Everybody is trying to find the punchline for what seems like the perfect set up to a great Jewish joke.

“My parents have only told me that Kamala’s husband is Jewish 5,486 times today,” tweeted Leslie Grossman.

I don’t have a joke, but I get the urge. It is astounding that Second Lady Karen Pence, who teaches at a private Christian school that bars openly LGBTQ teachers and students, is being replaced by a secular liberal Jew from West Los Angeles. The French have a saying, the more things change, the more they stay the same. The French are wrong.

The only Jewish husband of a national leader that I know of is Morris Meyerson, and he’s no role model. In 1921, a besotted Meyerson married svelte, brilliant Golda Mabovitch, who dragged him to Palestine and Hebracized her married name to Meir. The two lived most of their lives apart. Meyerson raised their children and pined away, while Prime Minister Golda Meir devoted herself to national affairs, as well to several passionate physical ones.

Emhoff is no Morris Meyerson. In the runup to the election, the Internet swooned with stories of Kamala and Doug’s later-in-life courtship and their blended Jewish-Christian-Indian-Hindu family. It turned out that here in Los Angeles, I know several people who have known Emhoff for years, and they confirmed my suspicions that the gossip was true.

“He’s just a really good guy,” one of them told me. Another friend, who refused to be identified to maintain his friend’s privacy, asked me to think of one of my nicest, middle-aged Jewish male friends —okay, late middle-aged — and imagine, one day you’re playing tennis with him, and the next day, he’s off to Washington on Air Force Two.

I’m sure that moment was surreal for Karen Pence and her friends too. What makes Emhoff’s case so interesting is this isn’t “Mr. Smith Goes to Washington.” This is “Mr. Smith Goes to Washington, Behind Ms. Smith.” Yes, Emhoff has had practice as a trailing spouse since Harris became a United States Senator in 2017, but Vice President is a whole other level of attention. America is going to have to adjust to a male +1, and Emhoff, great guy as he may be, will have some adjusting to do, too.

That’s where I think I can help.

What I learned as a pioneer in rabbinical husbandry was that the lack of models left me plenty of room to create a role free from expectation, thanks to society’s double standards. I remember tagging along with Naomi to a rabbinical convention in Palm Springs, and wandering down to the lobby where a group of rabbi’s wives were meeting. I heard an hour of complaints about being expected to show up at every function, lead the Sisterhood, keep their young kids perfectly behaved, and never, ever stop smiling.

But when I went to synagogue, I was treated more like a wild animal you might spot in a national park. I was stared at, and talked about, but people seemed grateful that I showed up at all.

I know, it’s sexist and unfair. No one commented on my clothes or hair, and if one of our kids acted out, a dozen people swooped in to help. And when I did volunteer — cooking second-night Passover Seder for 100, making latkes for 300 (I’ll send you the recipe, Doug)— I was flattened by gratitude.

Those low expectations came with a flipside. In ways both overt and subtle, society conditions us to expect men to be the one in the spotlight, the boss, the center of attention. But in shul, at book signings and lectures, I was in the pews, or off to the side, watching Naomi shine.

Hard? Honestly, no. And what makes it easy for me is that I am still that young man who walked through the synagogue doors 30 years ago, only to be amazed by the wisdom, humor and beauty of the woman on the pulpit. It still moves me to see her move others.

So here’s my advice to the Second Gentleman-elect: Just be there. Simply by being beside his wife, Emhoff will help shift American perceptions — about gender roles, about egalitarian marriages, about what it means to be a man.

Rob Eshman is the national editor of the Forward — and the husband of Rabbi Naomi Levy, leader of Nashuva. Follow him on IG and Twitter @foodaism, or email [email protected]

Advice to the Second Gentleman from a veteran male ‘rebbetzin’