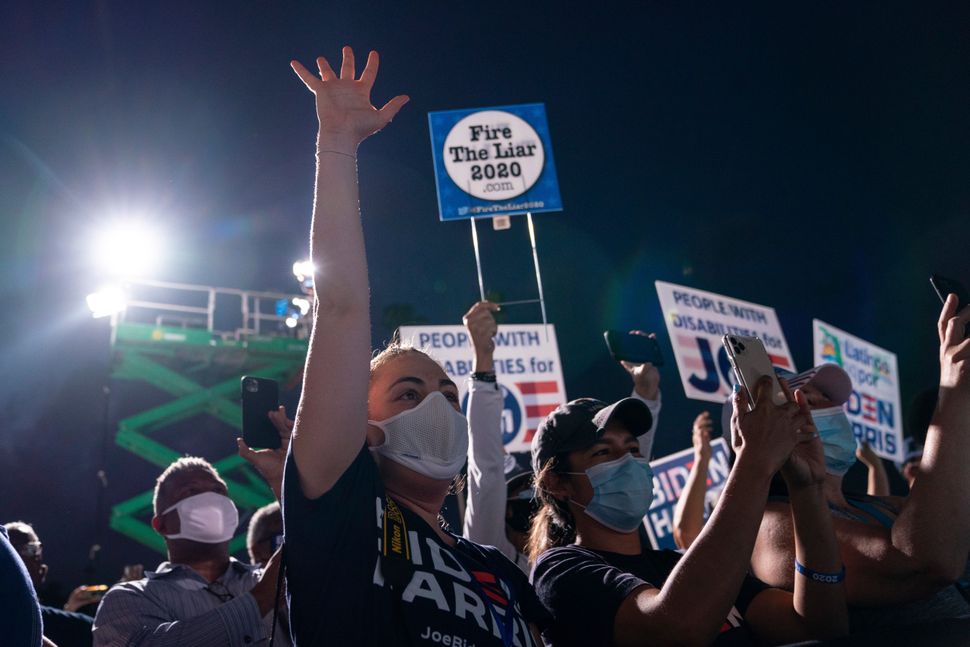 Supporters cheer as Joe Biden arrives for a drive-in campaign rally at the Florida State Fairgrounds on Oct 29,2020 in Tampa, Fl. Image by Drew Angerer/Getty Images

So, in the wake of Election Day, is Florida still good for the Jews – at least those who call themselves liberal? Are lefty bubbies and retired blue Boomers safe in their South Florida shtetls?

On Nov. 3, Trump carried the state by nearly 400,000 votes. Republicans also defeated Democrats down the ballot in the process, knocking off several liberal Jewish legislative candidates who had been favored. The GOP increased its control of both houses of the legislature, and flipped two Miami U.S. House seats.

“It wasn’t exactly a red letter day,” said Democratic State Rep. Joseph Geller, who was active in the Biden campaign, by way of understatement. “We didn’t have a good day in Florida.”

But does that mean the state belongs to Republicans, from the rolling lawns of The Villages in Central Florida to the boat paraders of Palm Beach?

There was one, lonely ray of sunshine for Florida progressives, many of them Jews, on what was otherwise a disastrous Election Day.

On the same ballot where Trump reigned supreme, an amendment to the state constitution mandating a phased-in, $15-an-hour minimum wage passed by 60.8% margin, just over the required amount. It won despite the opposition of the state Republicans and business community, as well as from outside conservative groups. Florida now joins seven other states in mandating a $15 per hour minimum wage. Experts say there is more to it than a falloff in voting for down ballot issues like the constitutional amendments.

“Floridians understand that the future of a vibrant economy in this state is not going to be based on attempting to lower wages, but to increase wages,” said longtime South Florida Democratic donor and activist attorney Mitchell Berger. 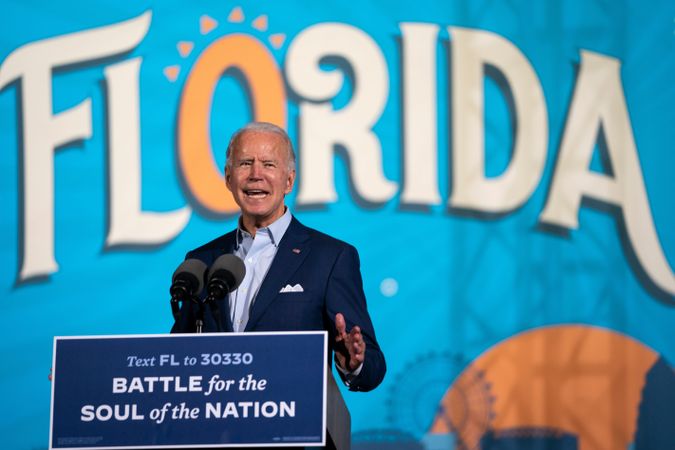 Joe Biden speaks during a drive-in campaign rally at the Florida State Fairgrounds on Oct. 29, 2020 in Tampa, Fl. Image by Drew Angerer/Getty Images

The minimum wage vote was incongruous to some observers, given the day’s other results. Even more telling, it was the third time in four years that Florida progressives have prevailed in statewide ballot measures, building on more than a decade of similar victories.

They recall similar outcomes in the face of previous GOP wins. In 2018, an obscure Republican congressman named Ron DeSantis, with Trump’s backing, won both his party’s primary and defeated Democrat Andrew Gillum for governor by 30,000 votes. Yet, Florida voters in the same election passed another constitutional amendment restoring the right to vote to nonviolent ex-felons who have served their prison terms.

In 2016, they approved legalizing medical marijuana.

Even earlier, in 2010, the year of the Tea Party avalanche in Florida and the nation, there was a similar anomaly. That year, despite the GOP wave, two constitutional amendments – aimed at egregious Republican gerrymandering — passed the 60% margin, mandated fair, nonpartisan districts for state legislative and U.S. Congressional reapportionment. In 2002, a similar vote mandated a maximum class size for public schools.

“The people of Florida essentially care about fairness, particularly fairness in government,” said Ellen Freidin, who led the 2010 campaign for the Fair Districts constitutional amendment, and who contributes to Democratic candidates. “But fairness doesn’t necessarily compute when you’re running one candidate against another,” she said. “People don’t make up their minds about political candidates in the same way they think about issues,” she said.

This apparent anomaly – progressive constitutional amendments passing with a 60%majority, even in Republican wave years like this one, with Democratic candidates regularly losing by 1-3 percent has raised fundamental questions: If this pool of social consciousness exists in Florida’s electorate, why can’t the Democrats capitalize on it? They have a registration advantage over Republicans in the state, and the two fair district amendments have largely leveled the electoral landscape. Why can’t Florida Democrats manage to get from 48-49% to 50% in partisan races?

Democratic State Rep. Anna Eskamani, of Orlando, has questioned why Democratic candidates this year did not link themselves to the minimum wage.

However, in Seminole County, a swing county adjoining Orlando which Biden carried, the linking strategy only went so far. Democratic challenger Patricia Sigman campaigned for the state senate as a strong advocate of the minimum wage, which her Republican opponent opposed. But a dark money-funded, phantom, third party candidate undermined her race.

“How we communicate over the noise is the challenge,” Sigman, a Jewish labor lawyer, said. “I don’t know the answer.”

“We don’t need to point fingers at each other,” said Geller, the state legislator. “As a party, we need to figure out how we recapture the trust of average working class people.”

Essentially, experts and activists say, what has evolved in Florida is a new way to make government policy sausage – and not a very pretty or efficient one.

Frustrated by their minority status in both houses of the legislature, progressive Democrats have learned to use the amendment process to circumvent Republicans, most recently on the minimum wage issue. As an Orlando Sentinel editorial observed, “Voters had to use the only means available to them when lawmakers refuse to do their jobs, which is to change the state constitution.”

When Democratic candidates embrace popular ballot measures, it can work to their benefit. The 2016 campaign to legalize medical marijuana, which passed the same year Trump carried Florida, was led by a heretofore unknown lobbyist named Nikki Fried. Two years later, she parlayed that win to a victory as Florida State Commissioner of Agriculture, albeit a narrow one, 8,000 votes out of eight million cast.

Frequently, GOP legislators and governors have challenged these progressive amendments in court, or legislated implementation rules and guidelines aimed at undermining them, generally without success.

“Clearly, there is a strong majority of Florida voters that value basic fairness and compassion and providing opportunity and second chances to other Floridians,” said University of Central Florida political scientist Aubrey Jewett. “Hence the passage of several specific proposals that do those things.”

“But in an election for president, governor, and senator there is one candidate against another, and those candidates represent a host of issues, personal leadership styles, partisan beliefs, and ideology.”

A key issue in making that choice, Jewett said, is abortion rights, which skews against Democratic candidates, and can be a stumbling block to reaching enough socially conscious voters to get from 48% – recent margins – in races to victory.

But a larger issue, Jewett and others say, is economic policy, in a state famous for its cozy relations with corporations, low-wages for service workers, and no personal income tax.

﻿“Florida is a state that depends on tourism and is seen as business-friendly and Jews, like other voters, may like Trump better on deregulation,” said Beth A. Rosenson, associate professor of political science at the University of Florida.

Ira Sheskin, director of the Center for Contemporary Judaic Studies at the University of Miami, agreed.

“I think that many Jewish Republicans and other Republicans vote that way for the GOP’s economic stands, but are more liberal on social issues,” Sheskin said.

The explanation for why the compassionate constitutional amendments pass is simple, said Berger: “As long as they don’t affect peoples’ taxes – they pass.”