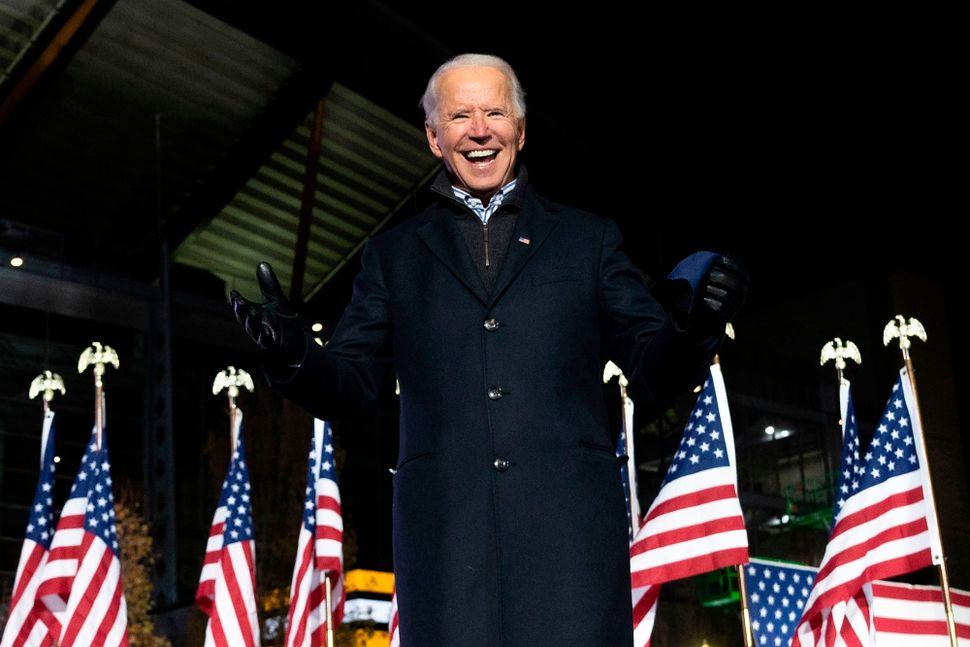 Joe Biden speaking during a Drive-In Rally in Pittsburgh, Pennsylvania on Nov. 2, 2020. Image by JIM WATSON/AFP via Getty Images

Just three months before the presidential election, a pair young Jewish political activists formed the Jewish Unity Political Action Committee. It raised all of $31,000, and every cent of it was spent supporting Joe Biden and Kamala Harris.

Led by the co-founders, Isabel Baer of Westchester, N.Y. and Ethan Wolf of Deerfield, Ill., the group micro-targeted pockets of young Jews in the battleground states of Michigan, Pennsylvania and Florida, encouraging them to register and vote for the Biden ticket.

While it’s impossible to say how much of a difference the Jews for Unity PAC made, Biden did carry Michigan and Pennsylvania, and Wolf said videos the PAC produced and streamed were seen over one million times.

“We had a great candidate in Joe Biden, and we wanted to prevent Donald Trump from winning another election,” said Wolf, who is 21 and a student at Ohio State University. “With COVID, racial injustice and healthcare, my generation talked about the issues and came out to vote.”

Between them, Biden and Trump drew the most presidential votes in a century, nearly 150 million. Typically, most Jews favor Democratic candidates, and three post-election surveys this month indicated as much although the accuracy of any poll is now under scrutiny, given how so many missed the mark in the two most recent presidential elections.

Young people of all religions this year voted in substantially higher numbers than in 2016. Counting votes cast through Nov. 9, a research group at Tufts University found that 50 percent to 52 percent of voting-eligible people ages 18-29 cast ballots this year compared with 42 percent to 44 percent in 2016.

Recent surveys have not examined the level of voting or political activism among young Jews. But anecdotal evidence suggests that both sides became energized this year — the left by issues like racial injustice, climate change and racism; the right by Israel and the fear of socialism. And both sides factored in their respective judgments about Trump.

“This is my second presidential cycle, and the difference this year is 100 percent,” said Baer, 22, a recent graduate at the University of Michigan whose activism began when she worked as a volunteer for Hillary Clinton in 2016. “I know that polling doesn’t do young Jews, but just from my social circle, four years ago, they felt like they needed to vote, but there was less activism to volunteer and dedicate hours. Four years later, some in my social circle were willing to give four hours a week to phone bank or volunteer.”

Baer was a high school senior when she began working for Clinton. Then she went off to college. Two years later she worked on the reelection campaign of Sen. Kristen Gillibrand of New York. That same year both Baer and Wolf became fellows of Israel on Campus Coalition, a group that advocates for Israel, at their respective schools. Neither knew of the other’s involvement until a year later when they met for the first time at the Democratic primary debate in Westerville Ohio.

Later, back at Ohio State, Wolf and several schoolmates formed a group, Jews 4 Joe, to drum up support for Biden. Baer went to work for Mike Bloomberg’s short-lived presidential campaign. After it ended, she began working with Wolf on Jews 4 Joe. 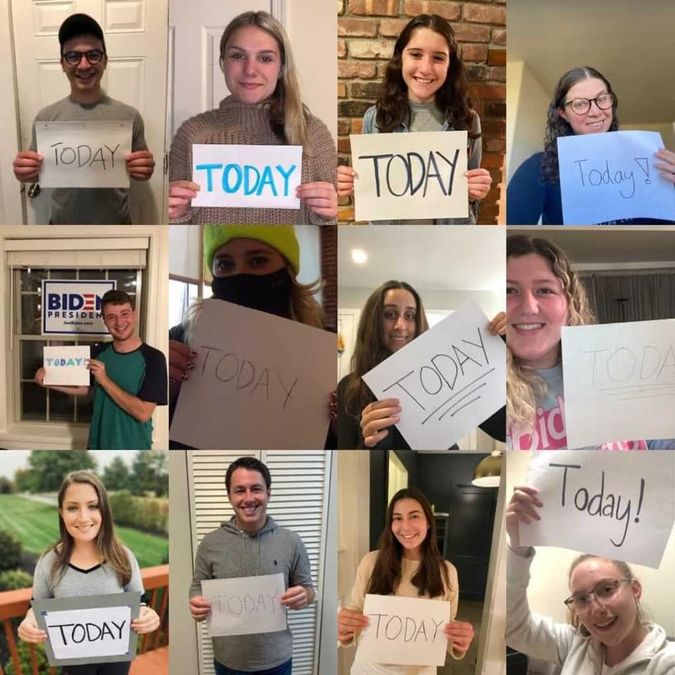 By summer, recognizing the historic nature of the 2020 election, they decided stumping for Biden wasn’t enough. They wanted to raise money. They filed papers to become a political action committee and began dialing for dollars.

By major PAC standards, what they generated was pocket change. But it was enough to spend on social media and produce videos tailored to influence Jewish voters in specific swing state communities.

“It was all very granular,” said Baer. “But it cast a wide enough net.”

With the final vote counting nearly over, Wolf is back at Ohio State; Baer, who graduated with a degree in political science and history, works for a marketing firm in Seattle.

What’s next for them politically? A perfect time to ask.

Both said they had intended to shut down the PAC and Jews 4 Joe after the election. But then they watched developments in Georgia, where two Democrats, John Ossoff and Raphael Warnock, are facing Republican incumbents in early January runoffs that will decide control of the Senate. If both Democrats win, the party gains control, making it much easier for Biden to achieve some of his policy goals.

The Jews 4 Joe Facebook page now includes a photo of Warnock and Ossoff together with a hand-written alteration to the Jews 4 Joe logo pasted over them. It now says, “Jews 4 Joergia,” with the words, “Let’s get to work” just above it.

The Jewish Unity PAC has already raised $7,500 to help.