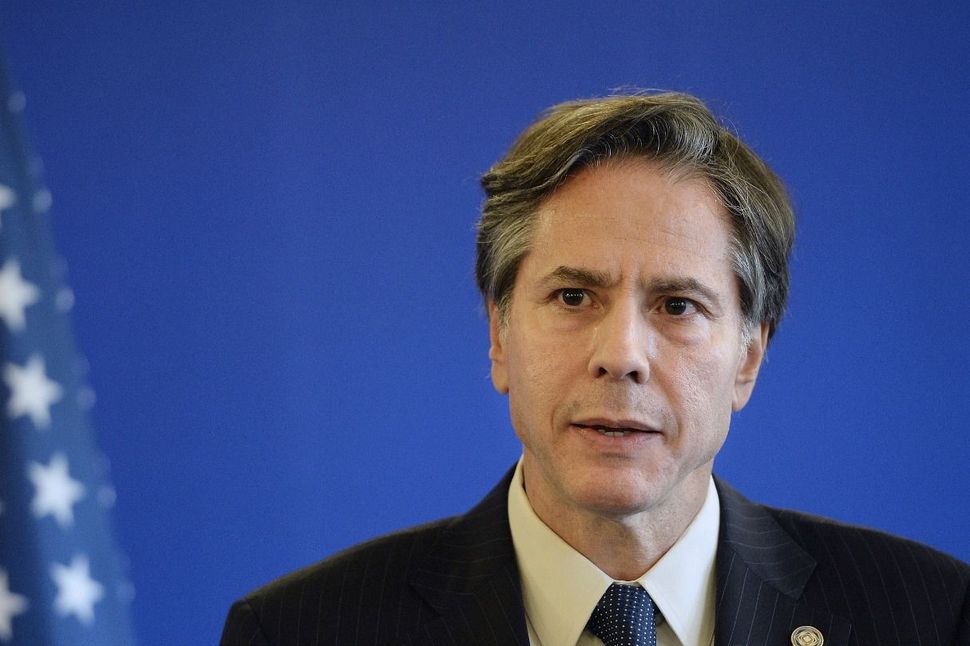 President-elect Joe Biden has picked Antony Blinken as his secretary of state — a “promotion” for Blinken, who had served as a deputy secretary of state for two years under the Obama Administration, from 2015 until he left office in January of 2017.

Blinken was born in New York City to Jewish parents. Here are a few things to know about the future secretary of state.

He grew up in Paris with his stepfather, a Holocaust survivor

When Blinken was nine years old, he moved to Paris after his mother got remarried to Samuel Pisar, a Bialystok-born Jew, who survived both Auschwitz and Dachau as a child. Pisar would go on to co-found Yad Vashem-France, and write about the Holocaust.

Pisar’s Holocaust experience and rescue by American forces at the end of the war had a powerful effect on Blinken.

“That’s the story that I grew up with — about what our country is and what it represents, and what it means when the United States is engaged and leading,” Blinken told Jewish Insider about the story of the Black soldier who rescued his stepfather.

In 2002, Blinken married Evelyn Ryan, a fellow public servant. While her husband was deputy secretary of state, she served as assistant secretary of state for educational and cultural affairs, and before that as public liaison for Vice President Biden.

During their bi-denominational wedding, the couple brought both a rabbi and a priest to perform the ceremony.

One Friday night in 2014, Blinken got an urgent call from Israeli Ambassador Ron Dermer. When he came over, with the embassy’s military attache in tow, Dermer laid out what Israel needed to keep its Iron Dome defense system functioning amid increasing missile attacks from Hamas, and asked Blinken to take it to the president. By the next Tuesday, Blinken had secured $250 million in funding for the Iron Dome.

His ancestry tells the American story, starting with a Yiddish author

The first member of the Blinken family to emigrate to the United States was Meir Blinken, an author from Kyiv who wrote short stories in the Yiddish press after arriving in the United States.

While he wrote about poverty-stricken Jewish immigrant communities, his grandchildren would attend one of New York’s most elite institutions, the Horace Mann School, and represent the power of the United States on the same continent their ancestors fled.

Tony Blinken’s father, Donald Blinken, served as the US ambassador to Hungary from 1994 to 1997, just after the fall of Communism and the opening of the eastern bloc. His uncle, Alan Blinken, was ambassador to Belgium during the same period.

Though he was the Biden campaign’s liaison to the left, he’s also been a conduit for centrist Jewish groups to reach the president-elect

According to Politico, Blinken hosts a call with leaders of progressive groups such as Demand Progress about their concerns and desires for the incoming Biden administration. However, he’s also been a conduit for groups like AIPAC and the American Jewish Committee, reported Jewish Insider.