Drew Binsky, who got famous by traveling the world, isn’t letting the pandemic stop him 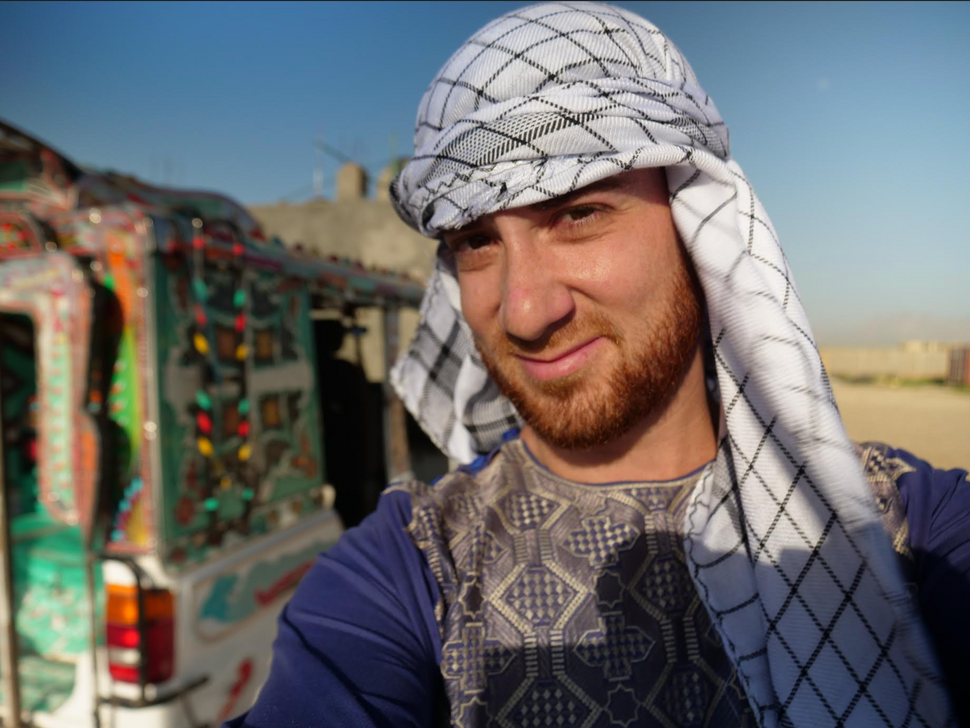 The first time Drew Binsky traveled abroad was when he went to Israel through Birthright in 2012. The second time was to Prague as part of a study abroad program during his junior year of college. That’s when the traveling bug hit him hard.

After Binsky was graduated from the University of Wisconsin-Madison, instead of going back home to Arizona, he took a job in Seoul, South Korea, as an English teacher.

There, he took an organized trip to North Korea and uploaded the videos to YouTube and Facebook channels. The videos accumulated over 10 million views, and Binsky started earning money, thanks to advertising revenue and sponsored partnerships with various brands. The realization he could actually make money while doing what he loved best led him to quit his job and devote his life to travel.

Now Binsky has over two million subscribers on YouTube, 1.8 billion video views and six million followers combined in all his social media.

Since 2012, he has traveled to 191 countries and has six more on his list before he can say he had conquered the world: Ghana, Saudi Arabia, Ecuador, Jamaica and Palau. A video crew will accompany Binsky to these last six countries to film a documentary on his worldwide conquest. 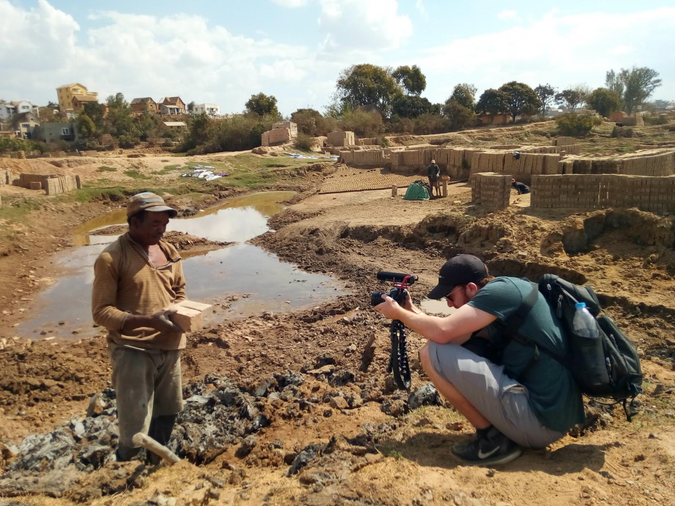 In a phone interview from Istanbul, Turkey, where he had just landed after spending three weeks in Afghanistan, Binsky said even the COVID-19 pandemic hasn’t done more than delay him.

“It stopped me for a couple of months, but now I have been on the road for the last four months,” he said. “I was in Egypt, Mexico, Afghanistan, and Iraq. It’s pretty great traveling during COVID There are no lines anywhere, the flights are empty, no tourists anywhere, the hotels are cheap. You have to take precautions, and everything is fine.”

The pandemic has affected the way people interact with Binsky. People are keeping their distance for the most part. “No more shaking hands or hugs and people kind of avoid you when you walk on the sidewalks. I saw people are wearing masks most everywhere, except for Egypt and Afghanistan. Everything else is back is back to normal.”

“Normal” for Binsky means standing out wherever he goes, with his ginger-colored hair and a short beard. Nor does he go out of his way to hide the fact that he is Jewish, whether he’s traveling to the most isolated places in the world or one of the few Jewish travelers in a Muslim country. 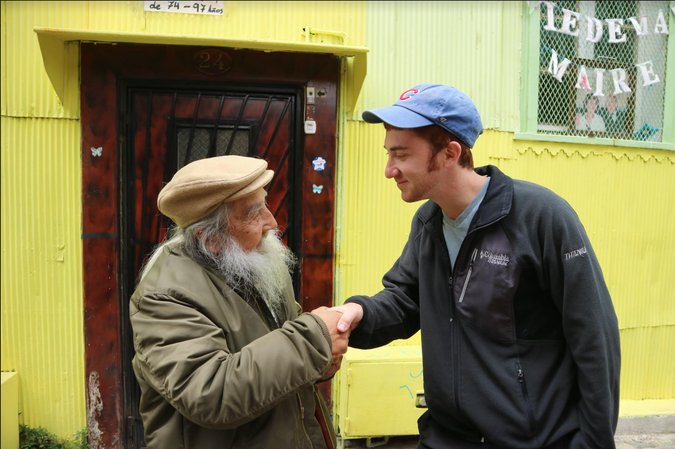 Binsky devoted one of his blog posts to the issue of being Jewish abroad. “To be honest with you,” he wrote, “the more I travel in Islamic countries and surround myself with Muslim people, the more amazed I am by how humble and hospitable they are. I’ve never had a single person discriminate against me for my religion. From my experiences of telling people I am Jewish, they become more curious and want to get to know me!”

Binsky’s real name is Drew Goldberg. It helps, he acknowledges, that he travels and posts videos under the name Binsky, a nickname his family gave him. “It doesn’t hurt, especially when I’m traveling to countries like Syria and Libya. It’s not the best to rep Goldberg.”

In each country he visits, Binsky makes sure to visit the Jewish community in the country. The meetings have helped strengthen his Jewish identity. “I love to document these untold stories,” he said. 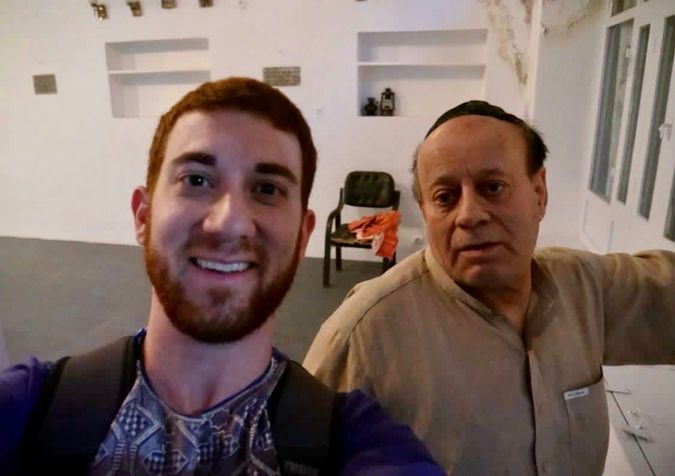 One of these stories, which gained him over a million views, belongs to Zablon Simintov, the last Jew in Afghanistan. He had met him during his first trip to the country on April 2019. “I usually post online that I’m going to be visiting the country and people reach out to me, I have followers everywhere and that’s how I found out about him.”

Those followers serve as the best tour guides and sources of information. Binsky had set out to find Simintov with a local follower who served also as a translator.

It wasn’t easy finding the last Jew, but Binsky was determined. “I knocked on a bunch of doors in Kabul asking about him. Before 1945, Afghanistan had thousands of Jews, mostly living in the city of Herat, but they all left to Israel, Europe and the US.”

Once he found Simintov, the 61-year-old man was only too happy to blow the shofar and show him the deserted synagogue which he still takes care of.

Many times during his travels, Binsky found himself in dangerous situations. If anything, he said, it gave him an adrenaline shot. “When I was in Libya, I fell asleep to the sounds of bombs right outside my window,” he said. “In Yemen, they took my passport and searched my bag- also in Afghanistan; they thought I was a spy. In Yemen, I missed a car explosion by only an hour.”

When he started traveling, he was on a tight budget, opting to sleep in cheap motels. Now that he is earning anywhere between $5,000-$60,000 a month from his videos, he can afford to stay in nicer hotels. “Right now,” he said, “I’m in a five-star hotel in Istanbul.”

At times, however, he doesn’t have the option to stay at a hotel at all. “I’ve visited remote tribes and slept in their villages. One of the most fascinating tribes I had visited was a tribe of the shortest people in the world. They had never seen a white person before.”

The video documenting his encounter with the Pygmies of Central Africa gained him over 1.2 million views. “It’s very exciting visiting these kinds of remote tribes, it’s very rewarding learning about their culture and staying with them.”

Binsky’s low-key charm and enthusiastic curiosity help him fit in. He also makes sure not to say “no” to anything offered to him to eat, even if some dishes he tried weren’t his first choice — dog meat, live octopus, spiders, and tarantulas. “I’ve drunk snakes’ blood,” he said, “which is considered a delicacy in Vietnam.”

He also has a word of advice to those wanting to do what he does. “I pretty much have worked 18 hours daily for the last four years. I never took a day off. I believe that if you work hard, you can make it happen.”

Drew Binsky, who got famous by traveling the world, isn’t letting the pandemic stop him