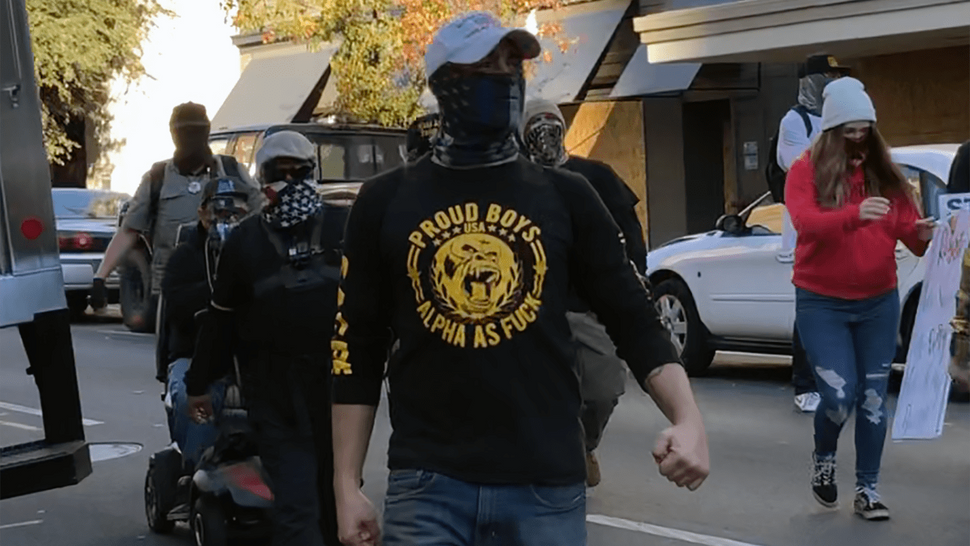 Members of the Proud Boys marching in Sacramento, Nov. 28, 2020. Image by Gabe Stutman

Members and allies of the far-right group the Proud Boys, some wearing bulletproof vests and armed with knives, marched through the streets of Sacramento on Saturday in a show of force, blasting loud music and chanting while attempting to provoke counterprotesters.

The day of political demonstrations began in the morning and stretched late into the afternoon; it was the fourth consecutive weekend of pro-Trump protests in the state capital, according to local news reports. A handful of arrests have resulted from the demonstrations. Another is planned for this coming Saturday.

The Proud Boys are a loose network of self-styled “Western chauvinists” that the Anti-Defamation League describes as a right-wing extremist group. In the hours following a peaceful demonstration at the state Capitol building two days after Thanksgiving, they spilled into the streets of downtown Sacramento, chanting “Whose streets? Our streets!” and “F*ck antifa!” while butting up against police cordons that blocked their path. The demonstrators exchanged insults and threats with roughly a dozen people identified as part of antifa, a loose connection of anti-fascist activists, often shouting across police blockades.

Each protest has followed a similar pattern, beginning with peaceful demonstrations and speeches in the public park outside the Capitol building, organized by President Trump supporters who believe the election was stolen, or anti-maskers furious at public health mandates implemented by Gov. Gavin Newsom and other Democratic leaders.

The San Francisco-based office of the ADL for the Central Pacific region is alert to the ongoing demonstrations, particularly the presence of the Proud Boys. In an email statement to J., the ADL said the events were a “cause for concern for a number of reasons” even though it had not noticed any “overtly antisemitic expressions” by demonstrators.

“First, they bring attention and possibly attract new adherents to extremist agendas and groups like the Proud Boys,” the statement said. “Second, their provocative and divisive rhetoric can and does lead to violence, as we saw in Sacramento and elsewhere.”

An ADL reportdescribes the group, an all-male national network of die-hard Trump supporters who espouse “traditional Western values” and frequently find themselves in street brawls with counterprotesters, as bigoted, misogynistic and xenophobic. The Southern Poverty Law Center calls it a hate group. Many Proud Boys reject the racist label, instead describing themselves as “American patriots” who “refuse to apologize for creating the modern world.”

Proud Boy leader and founder Gavin McInnes, a former media executive, calls the group “alt-light,” although members have partnered with more overtly white supremacist and antisemitic groups, such as those who participated in the violent “Unite the Right” rally in Charlottesville in 2017. 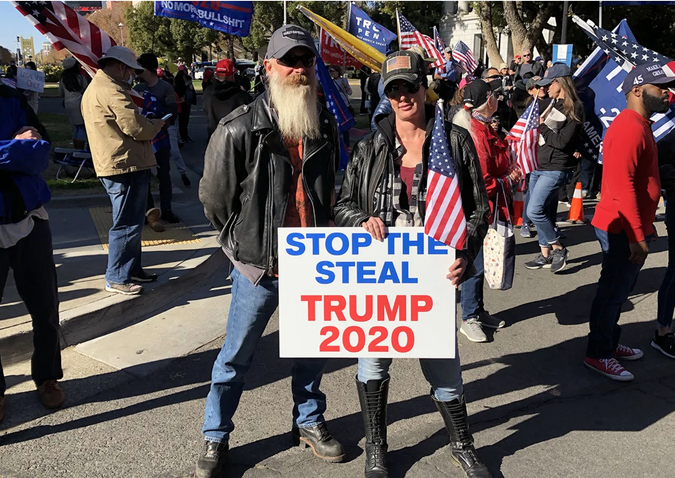 Demonstrators at a pro-Trump rally in Sacramento. Nov. 28, 2020. Image by Gabe Stutman

The Proud Boys gained widespread notoriety during a Sept. 29 presidential debate when Trump, evasive when asked to condemn the group, instead haltingly told them to “stand back, and stand by.”

Autumn Gonzalez, an organizer with NorCal Resist, an immigrant-aid group in Sacramento that supports counterprotesters, described the melting pot of right-wing ideologies present at the pro-Trump rallies.

“There’s a crossover between Jeffersonian-type conservatives who feel unrepresented by the state government in California, and more traditional hate groups like the Proud Boys,” she said, “as well as other various MAGA folks who aren’t necessarily in an organization, just big Trump supporter-type people.”

The crowd matched Gonzalez’s description — representing a cross-section of California’s right-wing contingent united in their support for the president.

Among the attendees were anti-communist Chinese activists distributing flyers to expose the ills of the Chinese Communist Party; anti-maskers fuming at public health mandates they believe to be a violation of their liberty, average pro-Trump conservatives waving American flags, and petitioners making demands to “recall Gavin Newsom.” There was even a table set up by a fringe group of California secessionists advocating for “New California,” a 51st state, featuring low taxation and conservative values.

“If you don’t let religion back into government, you’re going to lose everything,” speaker says. pic.twitter.com/XrkPu1iY5Z

The rally had a strong Christian current running through it. At times it resembled an evangelical revival mixed with a political rally. One man flew a Christian flag — a white banner with a navy square backgrounding a red cross — alongside an American flag. On multiple occasions attendees bowed their heads in prayer.

Lydia Mitchell of the Path Ministry in Sacramento delivered a fiery sermon, railing against “enemies” on the left who “want to take our country out and make it a one-world government.”

Critiques of “globalists” were frequent; one demonstrator waved a sign reading “defund George Soros” and another wore a T-shirt with the QAnon motto: “Where we go one, we go all.”

“We know our president stands for God and puts him first,” Mitchell said. “And his main agenda is to bring Jesus and the lord back to America.”

The Proud Boys were a focal point of the event, celebrated almost like a high school football team — symbols of manliness, if a bit amateurish. They even have team colors: yellow and black.

“We support our Proud Boys!” a speaker said to loud cheers, commending them for protecting demonstrators from “these fools who try to come out here and harass us for being American.”

The leader of the Central Valley branch, known as Shawn K., spoke to the crowd about his devout Christianity and his decision to homeschool his elementary school-age daughters to provide them a Christian education.

When the rally was over, the Proud Boys went on the march.

A crowd of supporters carrying American flags and Trump flags, wearing bandanas over their faces to conceal their identities and wearing bulletproof vests with “Don’t Tread on Me” patches moved through downtown Sacramento, blasting music on boom boxes and yelling chants in rhythm.

Police cordoned off city blocks to prevent violent confrontations, lining up in rows from sidewalk to sidewalk wearing riot gear and holding batons. Some were on horseback. Their goal was to stand between opposing protest groups after earlier demonstrations led to scuffles and arrests. 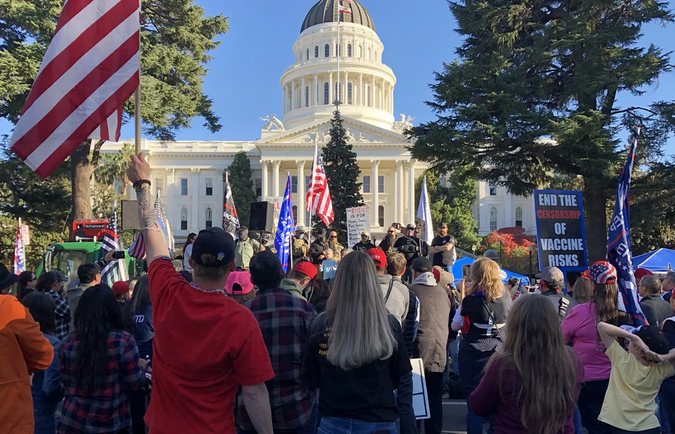 Members of the Proud Boys, on stage, received cheers from demonstrators at a pro-Trump rally in Sacramento on Nov. 28, 2020. Image by Gabe Stutman

There were roughly a dozen counterprotesters identified as members of antifa. Its adherents, like the Proud Boys, make up a loose network of activists united in their opposition to fascism, who will at times use force against it. Members range in their worldviews and political outlooks, though most are anti-capitalist, and identify as political anarchists or communists. Some antifa members engaged in destructive protests during periods of social unrest over the summer.

Protesters on opposite ends of the political spectrum frequently stood nose-to-nose exchanging insults and threats. At other times they stood silently facing each other, inches apart, daring someone to make a move, as police officers looked on.

At one point, a right-wing protester confronted a J. reporter, yelling insults and blocking the reporter’s iPhone lens. Asked if he was a Proud Boy, he responded, “I’m a white boy, motherf*cker.”

Many Proud Boys reject the idea that they are racists or white supremacists. The group includes non-white members, although nearly all of the Proud Boys demonstrating in Sacramento were white.

J. interviewed a Proud Boy named “Odin,” who declined to give his real name for fear of retaliation from an employer. Odin, who wore a black cowboy hat and a bandana over his face, said he is a “former Muslim” and now a Christian, and that the Proud Boys accept people of all races, provided they believe in the foundational value of “Western chauvinism.”

He understood that to mean family values based on the “traditional nuclear family, where men were men, women were women.”

“The problem is preserving those traditional Western ethics, morals,” he said. “A Western chauvinist is a proud American patriot.”

Asked about the Proud Boys’ approach to violence, and why he carried a knife and wore a bulletproof vest, Odin said it was for protection. “We never start the fight, but we finish it,” he said.

Proud boys sing their anthem in front of the California state capitol: “by blood or sweat we’ll get there yet…by god we’ll have our home again” pic.twitter.com/OA3ZGwTfCI

Critics of the Proud Boys say the group often uses language that obscures some of its core beliefs, and that the phrase “Western chauvinism” is a smokescreen for a fundamentally white supremacist and xenophobic ethos.

Proud Boys also commonly flash a hand gesture associated with white supremacy. The “OK” symbol — a circle formed with the thumb and forefinger with the other three fingers extended up, resembling the letters WP for “white power” — became an internet meme three years ago.

Some have called the use of the hand signal an ironic joke. But it has been used by violent white supremacists like Brenton Tarrant, the Christchurch mosque shooter, who flashed the gesture to reporters at a court hearing in 2019.

On Saturday, numerous Proud Boys made the “OK” or white power gesture while posing for photos. 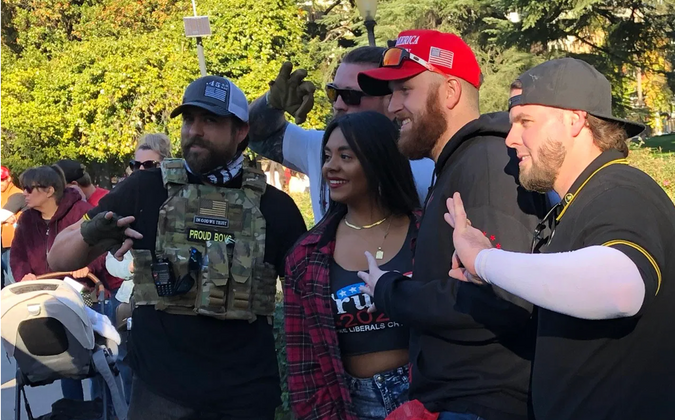 Members of the Proud Boys flash a hand gesture associated with white supremacy at a pro-Trump rally in Sacramento on Nov. 28, 2020. Image by Gabe Stutman

The ADL warned about the type of political rhetoric advanced by the Proud Boys and others like it, which may work to divide Americans along racial, ethnic or other lines.

“Their coarsened and extreme speech and conspiracy theories pit Americans against each other,” the ADL statement read, “which forms the basis for antisemitism and other forms of bigotry against marginalized groups.”

This article was originally published by JWeekly, and has been republished with permission.