Betsy DeVos loved religious education — what will happen to Jewish schools under Biden? 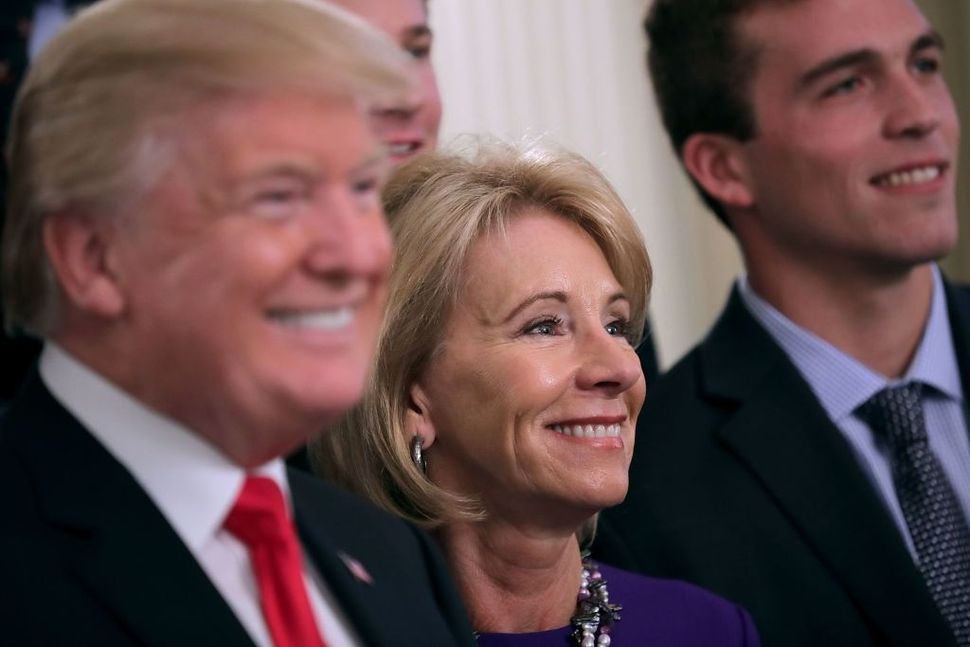 U.S. President Donald Trump and Education Secretary Betsy Devos pose for photographs with members of the National Collegiate Athletic Association’s champion University of Virginia men’s tennis team in the East Room of the White House in 2017. Image by Getty Images

Under President Donald Trump, Orthodox Jews, who have long sought government funding for one of their highest priorities, their schools, loved what they heard from the administration.

“School choice has been so important to the Orthodox Jewish community, and finally got its due not only among the administration but also in Congress,” said Rabbi Abba Cohen, vice president for government affairs at the umbrella Orthodox group Agudath Israel.

President-elect Joe Biden expressed skepticism about public charter schools on the campaign trail and is expected to name an education secretary close to the labor movement, which generally opposes charter schools and programs that send public dollars to private schools.

For now, religious school advocates are savoring the policy victories under Trump and shrinking their federal ambitions for the next four years.

But DeVos failed to move a comprehensive school choice package that could have offered large tax breaks to parents who send their children to private schools through Congress.

The most significant boost to religious schools during the Trump era likely came not from the legislative branch, but from the judiciary, through a series of Supreme Court decisions.

Sam Abrams, director of the National Center for the Study of Privatization in Education, said one ruling effectively struck down dozens of state constitutional amendments that have historically kept public funding from going to religious education.

As a result, Abrams said, he expects to see a lobbying bonanza from yeshivas and Catholic schools in states where they may now be eligible for tax credits that help families offset the cost of religious education.

“Many Orthodox and even conservative Jews allocate a decent amount of their disposable income to tuition, and they’re tired of it and they feel double taxed,” said Abrams, who is also a professor at Columbia University’s Teachers College. “They’re going to fight hard — I believe — to get tuition tax credit scholarships in states that don’t have them.”

Those efforts will be largely unaffected by the new administration, Abrams said, since the federal government has limited control over whether states allocate education funding to private schools.

Nathan Diament, director of the Orthodox Union Advocacy Center, said that in addition to the court decisions it is also often easier to make progress on school choice at the state level. About 90% of education funding comes from state and local government, and Diament said that while school choice has become an increasingly partisan issue in D.C., state lawmakers are often easier to work with.

“It is much more pragmatic,” Diament said. “You have fewer of these pitched ideological battles than you do in Washington when you get these national organizations on both sides really torqued up.”

While Orthodox groups and other religious school advocates double down on state lobbying, some Jewish activists are cheering the departure of DeVos.

Randi Weingarten, the American Federation of Teachers president, said she is fine with some of the current federal programs that support certain low-income students and those with disabilities who attend private schools.

“There are different kinds of ways that we have been able to support religious institutions,” Weingarten said. “Unfortunately in the last few years the Trump administration and Betsy DeVos in particular has tried to pit communities against each other rather than trying to find ways to address the real needs.”

(Weingarten, rumored to be in the running for Biden’s education secretary, also emphasized her belief that “Public funding has to go to public schools.”)

“It protects religious institutions not to take direct government funding because with government money comes government rules and regulations,” he said.

But the Reform Movement also opposes government funding to religious schools for a broader set of reasons, Saperstein said, including concern over separation of church and state and fear that vouchers and other expressions of school choice would weaken the public school system.

Saperstein noted that the vast majority of Jewish children attend public schools, and that a strong public education system is necessary for the country as a whole.

Cohen, from Agudath Israel, said the choice between more school choice programs and strong public education was a false binary and that it was possible to properly fund both.

Cohen also acknowledged Jewish concerns that allowing government dollars to flow to religious schools could pose a risk for religious minorities. But he said specific concerns around separation of church and state can be addressed without eschewing all government funding for Jewish education, especially considering that it currently comes at an often prohibitive cost to families.

Saperstein agreed that Jewish schooling was essential and should be made widely available, but said it was incumbent on the Jewish community to fund Jewish education rather than rely on the government.

“A Jewish full time education option is vital in terms of strengthening Jewish identity,” said Saperstein, who served as the U.S. ambassador for international religious freedom during the Obama administration. “The answer to that is that our community — through our federations and our charitable giving — have to raise more money.”

In addition to possible areas for progress on the state level, where there were few dramatic shifts during the November elections, Cohen said he sees a few possible areas of collaboration with the Biden administration, especially on securing funding for special education and other existing programs that private schools are allowed to access.

COVID-19 relief for private schools will also be a focus in the coming months.

“You can’t fight a pandemic by only helping some communities or some schools,” said Diament, from the Orthodox Union. “You have to have a comprehensive approach otherwise it’s not going to work.”

The COVID-19 relief package that passed last spring with bipartisan support included funding for private schools and advocates hope to see more of the same in the next stimulus.

Cohen also said that he believes Biden personally supports religious education and that much of the federal landscape will hinge on who he appoints to key roles. He added that school choice advocates made significant progress during the Clinton administration in the 1990s and that the increasingly polarized nature of the issue has made it more difficult to navigate in Washington.

“Education has gotten caught up not only in partisan politics but in the culture wars and that has really been to the detriment of the cause,” Cohen said.

Update note: At 12:37 p.m. on Friday, December 4, this story was updated to add additional context about Rabbi Abba Cohen and Rabbi David Saperstein’s views on public funding for religious education.

Betsy DeVos loved religious education — what will happen to Jewish schools under Biden?