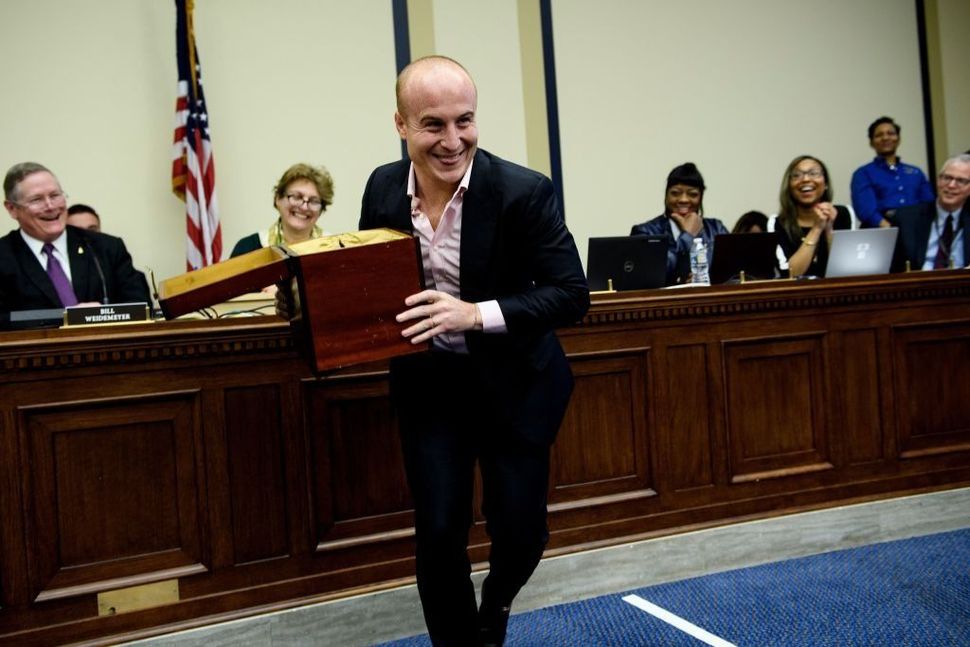 US Representative-elect Max Rose (D-NY) jokes about taking the lottery box during an office lottery for new members of Congress on Capitol Hill November 30, 2018 in Washington, DC. Image by AFP/Getty Images

Max Rose offered a taste of what his New York City mayoral bid will look like during a Wednesday event with the Forward, assailing Mayor Bill de Blasio’s tenure and pledging to fight for the working class while eschewing political labels.

“I embrace the notion of moral populism,” said Rose, a Democrat who lost his Staten Island Congressional seat to Nicole Malliotakis in November. “There is a system in place in both New York City and the rest of the country that has completely ripped people off — and when it’s not ripping them off, it’s ignoring them.”

Rose ticked off a variety of ways to help poor working class New Yorkers, including providing a universal basic income for some residents, desegregating the city’s public schools and offering property tax breaks to city employees.

He also reflected on his loss to Malliotakis. Rose acknowledged that his attendance at a Black Lives Matter march in June contributed to his loss in a historically Republican district but disputed the notion pushed by some moderate Democrats that the party should go out of its way to avoid being branded as anti-police.

“I take responsibility for my loss and under no circumstances should we ever retreat for fighting on those issues,” Rose said.

Rose criticized Malliotakis for demonizing the march organizers, for “positioning them as angry people of color who we should be afraid of rather than listen to,” Rose told Forward editor-in-chief Jodi Rudoren.

(Rose does not support defunding the police and has called for higher salaries for officers along with more accountability for NYPD leadership.)

A Jew from New York

Rose grew up in a Jewish household and was bar mitzvahed at Union Temple near Prospect Park in Brooklyn under the supervision of the “wonderful and dynamic” Rabbi Linda Goodman.

His Jewish identity became much stronger, however, when he enlisted in the Army.

“I was the first Jew people met,” Rose said. He recalled comments his fellow soldiers made like, “Oh, you guys don’t have horns” or “You got Jewed.”

Rose said his family’s Judaism was largely cultural and omnipresent as a child in Brooklyn.

“It was whether your parents have NPR on the radio, it was whether The Times is a part of your life,” Rose said. “Going to Zabar’s was a religious rite or practice in itself.”

He hopes to pass the same identity onto his infant son Miles, who he adopted with his wife Leigh Byrne last spring.

“One of the most wonderful parts of being a New York City Jew is it’s not just about religion,” Rose said.

If he officially enters the race, Rose will join a field of other Jewish candidates, including Comptroller Scott Stringer and Zach Iscol, a film director and fellow veteran.

The pandemic, and politics

Even during his Congressional campaign, Rose was already starting to take umbrage with de Blasio’s handling of the coronavirus pandemic.

He argued that the mayor wasn’t precise enough in discussing ultra-Orthodox Jews and their experience of COVID-19, and said the mayor also failed to consult with Haredi leaders before cracking down on the community.

“You shouldn’t call people out by their religious affiliation ever — ever — especially in situations like this, because it brings about verbal hate and physical attacks,” he said.

Rose also said de Blasio botched the school reopening. He said schools should have remained open during summer break, with classes held outside, and the vacation should have been shifted to run between Thanksgiving and March.

De Blasio and business leaders also should have rallied to create a fund for local businesses independent of official government relief efforts, Rose said, decrying the city’s failure to provide more of an economic cushion to poor communities.

“We’re the richest city in the world,” Rose said. “This is the fault of our mayor, definitely, but it’s also the fault of the private sectors and our business leaders who did not step up.”

Many New York political watchers give Rose long odds if he enters the race. He’d be another white man, in a race with several of them, at a time when many Democratic primary voters are looking for diverse leadership.

And he’s a moderate from a borough that hasn’t sent a mayor to Gracie Mansion since the city consolidated in the nineteenth century. He’s also calling for a universal basic income in a race that Andrew Yang — who popularized the concept and arguably owns the idea — is widely expected to enter.

Rose isn’t too worried about any of that. The 34-year-old has no shortage of distinctly New York charisma on his side, though he pledged to tone down his trademark profanity. Rose cited foul language as one of his few regrets of his young political career and pledged to donate $500 to a charity — Rudoren suggested the Forward itself — if he is caught swearing in 2021.

That resolution doesn’t take effect until January, which is good for Rose considering that his Forward interview was laced with colorful language. Rose said various things were idiotic, stupid, and pissed him off, though nothing like when he used actual profanity while insulting a voter on the campaign trail.

Rose said he rejected terms like “moderate” or “pragmatic progressive” that either failed to tell you anything about a politician or distorted their actual beliefs. Labeling candidates, he said, was not a helpful way to approach the race or calculate his odds.

But, standing no taller than 5 feet, 7 inches, Rose suggested he did have one ace up his sleeve.

“New York City has a long tradition of electing short mayors during times of crises,” Rose said, citing Mike Bloomberg and Fiorello La Guardia. “History is on my side.”