Not long after the Boy Scouts of America started letting girls in, Gabbi Stein felt her parents nudging her to join.

Their sales pitch was hardly original: Their daughter was a junior in high school. It would look good on her college applications.

“At first I was like, Oh my God, this is totally not my thing,” Stein said. “I’m totally cool with my mom cooking my dinner and living in my air-conditioned room.”

But the Los Angeles native warmed to the Scouts quickly after joining her all-girls troop. She racked up badges for soil conservation, pioneering and robotics, staying the course even as the world shut down during the pandemic. 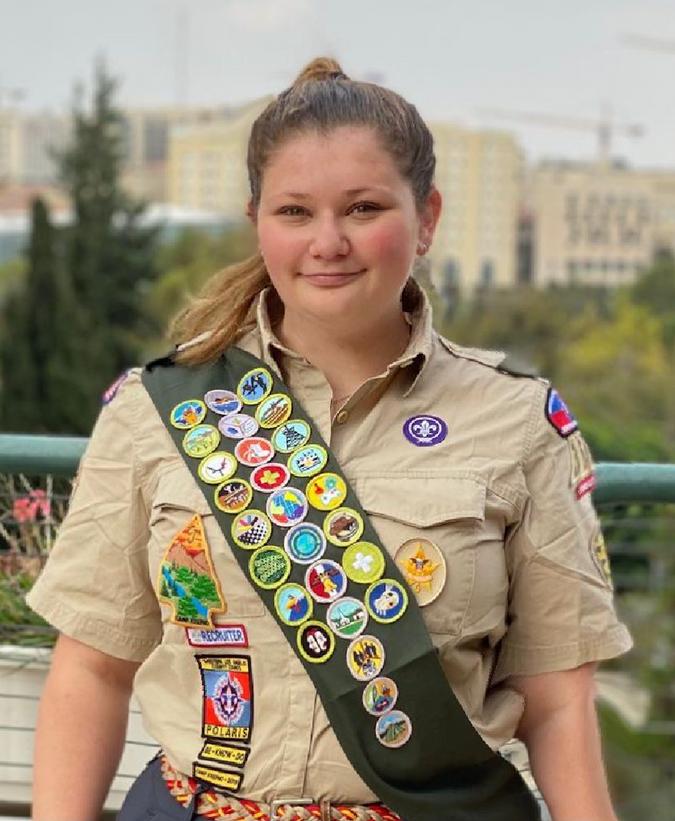 In the end, Stein’s achievement was certainly original. On Dec. 17, she became the first Orthodox Jewish girl to earn the rank of Eagle Scout.

As quintessentially American as apple pie or football, the Boy Scouts of America had fallen on difficult times before it allowed girls to join.

It had weathered the revelation of widespread sexual abuse in its ranks, and a long-standing ban on gay Scout leaders was not overturned until 2015. In recent decades, membership has fallen.

But in February 2019, the organization rebranded as Scouts BSA and formally changed its policy to allow separate, all-girls troops to pursue Scout badges.

As a member of the inaugural class of female Eagle Scouts, Stein is the first of three girls from the troop sponsored by B’nai David-Judea, a Modern Orthodox synagogue in West Los Angeles, who are on track to earn that certification in the next few months.

Her troop — which started with the minimum of five girls and three adults — now stands at 17.

Stein’s Eagle Scout project — a capstone-type undertaking with a primary goal of positive community impact — responded to the unfamiliar danger of the pandemic.

“I remember going outside and seeing a bunch of people not wearing masks in our community,” she said. “It came to me that they might not know COVID-19 guidelines.”

After conducting 100 hours of research and interviews with public health experts, Stein created a “Coping With COVID-19” handbook, a 15-page document compiling health, employment, and senior resources, as well as best practices for individuals and families.

The document has been circulated at Congregation B’nai David-Judea and is publicly available on the synagogue’s website.

“Gabbi’s guidebook is an empathetic and incredibly thorough resource,” said Rabbanit Alissa Thomas-Newborn of B’nai David-Judea. “It’s a wonderful and thoughtful way for the shul to share sources of support specifically during Covid.”

Stein said the resistance to her presence as a female Scout was limited, which made the few unsavory moments stand out. A male counselor had once ignored her when she sought help. She had heard a boy telling fellow Scouts to “stop acting like a girl,” right in front of her.

But for the most part, she said she was received as a peer — even on trips when she was the only girl in the group.

One such adventure — requiring her to build a shelter in the forest out of leaves and twigs to sleep in — produced the wilderness survival badge, one of 29 she earned in the course of the program. (Eagle Scouts must complete a minimum of 21.)

““I really started to realize how much I loved nature, how much nature is calming,” she said. “And the girls are so great.”

And yes, she saw the title of first female Orthodox Eagle Scout as “kind of cool.” But Stein was more sanguine about how her troop was able to represent Judaism in the secular settings.

“The Jewish values really, really show,” she said, adding that they align with the principles of Scout Law. “They see we have different values from other people our age. We tend to be people’s favorites.”

Stein presented her Eagle Scout project to a board of certifiers in Los Angeles over Zoom on Thursday night — though for the 19-year-old, who’s currently in Israel on the gap-year program Nativ, it was early Friday morning.

But even being in Israel, she said, was evidence of her growth in the Scouts.

“I don’t even think I would be in Israel right now if not for this whole scouting experience,” she said.

Stein plans on beginning her freshman year at Muhlenberg College in the fall of 2021.