‘We knew this day was coming’: Jews react to storming of Capitol building 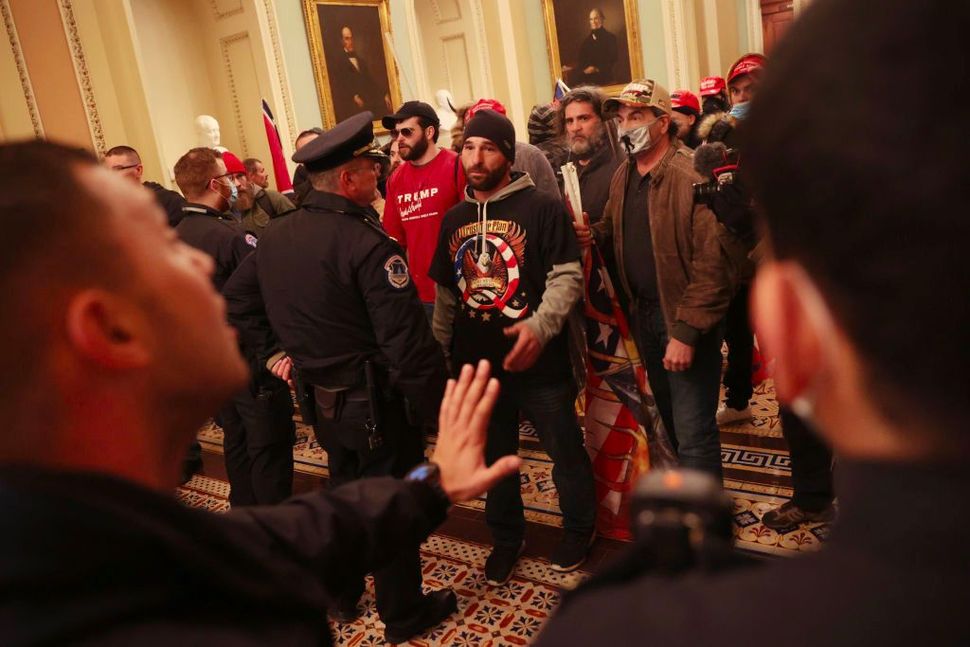 They compared the scene at the Capitol to the violent regimes their parents fled.

They posted jarring photographs of Confederate flags flying in the halls of America’s most important government building, concluding grimly that “the Civil War isn’t over.”

Jewish leaders, writers and members of Congress reacted in real time as a pro-Trump mob beat back police and stormed the Capitol today.

The protestors disrupted the certification of President-Elect Joseph Biden’s victory. As senators and members of the House evacuated their chambers and pictures emerged of Trump supporters lounging in the offices of political leaders like Nancy Pelosi, social media lit up with alarm.

Absolutely staggering to see “protesters” trying to storm the US Capitol and assaulting police. Such activity is criminal and undemocratic, full stop. Those inciting such violence — whether @POTUS, other elected officials or so-called activists — should be held accountable. https://t.co/AGHgG1XAVO

Two bare minimum tweets after the Capitol has been stormed by extremists is too little, too late.
.@jack, it’s overdue to suspend @realDonaldTrump until his account stops promoting disinformation and inciting violence. https://t.co/GYQBFUN3Nq pic.twitter.com/mEUzUYvMJs

Simone Zimmerman, a co-founder of the anti-occupation activist group IfNotNow, contrasted the election of Georgia’s first Black senator with violence from those who “oppose multiracial democracy.”

In contrast to terrifying scenes coming from DC rn, from those who oppose multiracial democracy, this is a hopeful reminder of the better future we can choose to build by uplifting the leadership of those who for too long have been shut out of our politics — in the US & abroad. https://t.co/J9FDc2SGtA

Rabbinical leaders called the protests an attack on democracy.

Rioters storming the US Capitol as Congress attempts to affirm the electoral college vote is an unprecedented attack on the foundations of our democracy. This nation was founded on the principle of the rule of law. We call on President Trump to demand the rioters stand down.

Protests happen in democracy. This isn’t that. https://t.co/s1uPJGLIsk

Alexander Vindman, who testified against the Trump administration during impeachment hearings, urged Department of Defense leaders to contain the protests.

History will judge the SecDef and service secretaries and Joint Chiefs and the Chairman of the Joint Chiefs of Staff @thejointstaff for their actions this moment. Nothing they have done, at any point in their long careers, matters as much as what they do now. #HereRightMatters

Ari Fleischer, a former press secretary for President George W. Bush, suggested that Democrats were reaping what they sowed — but then walked the sentiment back with a tweet calling on President Trump to condemn the violence

If you don’t like what’s happening today, maybe you should go back four years, look in the mirror and ask if it was a good idea to declare #NotMyPresident, declare yourself the Resistance, and boycott an Inaugural. When one side violates norms, the other side will too.

The President needs to condemn this and tell the crowed to disperse. No group, for any reason, should be allowed to take over the Capitol Building. It belongs to the people, not the mob.

Ivanka Trump posted, and then deleted, a tweet calling the protesters “American patriots” and urging them to “be peaceful.”

.@IvankaTrump has deleted her tweet calling the violent MAGA mob that stormed the US Capitol “American patriots” pic.twitter.com/KtB9Ioposw

Many blamed President Trump, who addressed protestors this morning and later condemned Vice President Pence via Twitter for refusing to block the certification of Biden’s victory, for stoking the violence.

I was with pro-Trump protesters all morning near the White House. This was the plan. Trump whipped them up, and then they marched on the Capitol to subvert the democratic process.

Rep. Elissa Slotkin on the Capitol protests: “This was instigated and perpetuated by the leaders.”

She adds: “We all heard the president today.” @MSNBC

More fuel on the fire https://t.co/2wGiyV7gRT

Remember when the President told the Proud Boys et al to “stand back and stand by”? This was the natural outcome. https://t.co/A3KivAn7iF

Others saw the protests as the logical consequence of an increasingly embittered political sphere.

On CNN, the former DC police chief tells Jake Tapper, “I don’t think we could have anticipated that it would go this far.”

Actually, many, many people anticipated it would go this far.

We knew this day was coming. A stroll down any mainstream journalist’s mentions indicated that this is the way this country is going. https://t.co/TU6p8cyz0U

We didn’t need to see these images to know how under siege our democracy is and how far we are from the equality and justice we need, but it sure is painful to look at. Hoping everyone in the capitol is safe. https://t.co/lH1cMc0QHf

Josh Hawley & his right-wing colleagues in the GOP are responsible for the violence in the Capitol today.

They encouraged, enabled, and embraced white nationalism & fascism — over the past few years and right up through today.

We will not forget. We will hold them accountable. https://t.co/K4EsJivW5o

Many contrasted aggressive tactics used against anti-racism protestors over the summer with the Capitol police’s seemingly less forceful response to the far-right, largely white group.

I have been arrested by the Capitol police four times and watched a lot of people get arrested by them. I sincerely expected them to be able to prevent this.

You can’t reform this. https://t.co/MQKrERb0Pa

On Twitter, Jewish organizations across the ideological spectrum issued statements condemning the unrest.

We support peaceful protest, but storming the halls of Congress and the Capitol building is unacceptable. We condemn these actions.

The peaceful transition of power is the bedrock of our democracy.

We are shocked and horrified by the violent riots taking place on Capitol Hill at this time.

We urge @POTUS to call for an immediate end to the riots and respect the certification process currently underway.

As Trump supporters storm the Capitol building, our thoughts are with the lawmakers, congressional staff, and Capitol police, and we hope everyone remains safe. It is shameful that President Trump incited these dangerous acts.

The president repeatedly incited far-right thugs to subvert our democracy, and now they’re trying to do just that.

Trump and his allies should tell their supporters to stand down – or else be held fully accountable for their appalling, dangerous actions.

The extremist violence at the Capitol is undemocratic and a direct result of leaders, including President Trump enabling dangerous conspiracy theories at the highest levels. Those behind this attack on our democracy need to be held accountable.
pic.twitter.com/jzbUpBTn3W

We are watching what is happening as it unfolds. This is an attempted coup in action, it is being egged on by Trump, and it has been enabled by the entire GOP and everyone who repeated the falsehood of “both sides.”

Above all, the day’s events had terrifying historical echoes.

This is currently your country.
The Civil War isn’t over. pic.twitter.com/5cVEmRMsGI

It took 159 years, but a mob marching behind a confederate flag has stormed the US Capitol. They are doing so on @realDonaldTrump’s express orders. pic.twitter.com/Q9MnbT0emZ

Many of us come from families who fled other countries where scenes like this were the norm.
But not in America. Never in America. Unthinkable!
Until now.
These people aren’t protestors. They are engaged in an insurrection, incited by a lawless president.

‘We knew this day was coming’: Jews react to storming of Capitol building