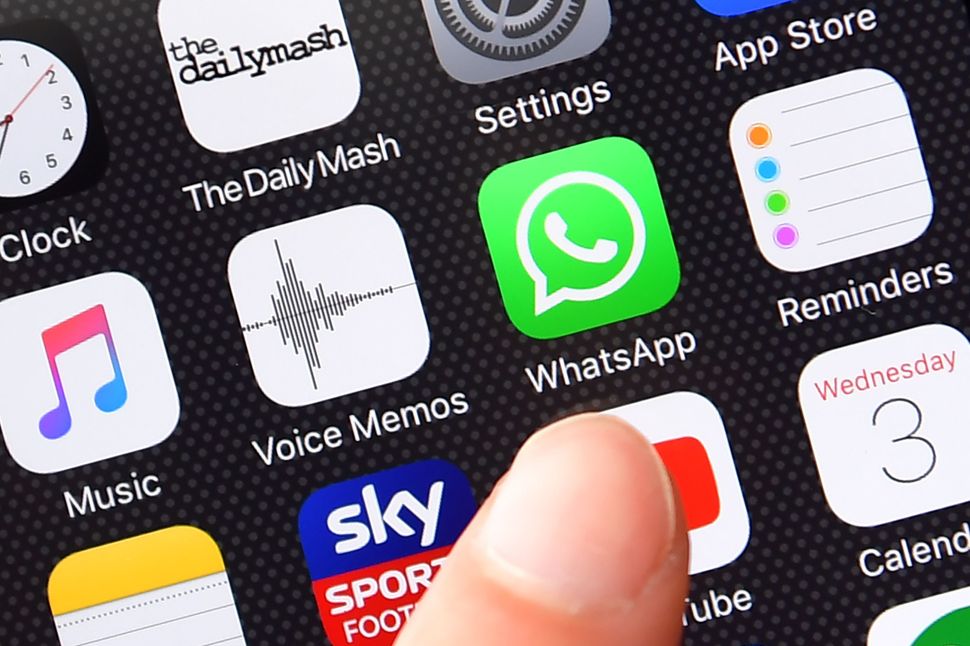 A persons finger is posed next to the Whatsapp app logo on an iPhone on August 3, 2016 in London, England Photo by Carl Court/Getty Images

After an armed insurrection at the Capitol, rampant conspiracy theories about a stolen election and social media blackouts for President Donald Trump, some WhatsApp, YouTube and Facebook users in Ultra-Orthodox, or Haredi, communities see the present moment as the darkness before the dawn — that is, the golus before the coming of moshiach, the messiah.

“If nothing happens and Biden and crew go along with their evil plans, I’m sure it just means Mashiach will be here speedily BH,” said one WhatsApp user in a pro-Trump Haredi group on Tuesday, using the abbreviation for Baruch Hashem, thank God.

“We must experience 9 months of birth pangs before Mashiach,” said another last Friday.

Anticipation of the coming of the messiah is not new for some Haredi Jews, especially many from the Lubavitch movement who believe the sect’s previous spiritual leader, Rabbi Menachem Mendel Schneerson, was the actual moshiach. But linking the redemption of the earth to President Trump and baseless claims about a stolen election is unique, and may illustrate the creeping influence of conservative media and its heavily evangelical overtones on America’s Haredi Jews.

Gregory Thornbury, a theologian who studies American evangelicalism, said that “end of times” speculation is “catnip” to evangelicals, because it combines biblical authority with prophecy. President Donald Trump’s close relationship to far-right evangelical Christians and his courtship of televangelists like Paula White has created a natural hero in this narrative.

“Trump has become a messianic figure,” Thornbury said. “The language they use for him is messianic.”

And with 83% of Orthodox Jews indicating they planned to vote for Trump in October of 2020, that narrative has adapted itself for a Jewish audience. While Trump himself is not moshiach, some Haredi Jews believe his bans from social media and his election loss comprise the period of darkness that comes before the world will be saved.

Many Haredi Jews identify with mainstream Republican talking points, including public funding for religious schools, opposition to abortion and fewer coronavirus restrictions. But as with non-Jewish Republicans, some segments of the Haredi community have seized upon disinformation disseminated by the president, disreputable blogs and local agitators like Heshy Tischler, the organizer of rallies in Borough Park in October that turned violent.

In a population with limited English proficiency where distrust of the secular media is widespread, conservative commentary manages to maintain a powerful hold on the community.

“Although the Hasidim are on their own WhatsApp chats and have their own Yiddish press and so on, they’re clearly absorbing the part of the media ecosystem that’s talking about this era, this culmination with Trumpism and the excitement about Trump,” said Joshua Shanes, a professor of Jewish Studies at the College of Charleston. “They’re listening to right-wing extremists on the radio and I would imagine that’s going to have some kind of cultural impact on them.”

And indeed, the coming of the messiah and popular right-wing conspiracy theories are linked in conversations on Haredi social media.

A Facebook group called “Mashiach is coming – Are you ready???” with about 1,500 members that was started in October of 2016 has been littered with unfounded claims about the danger of the coronavirus vaccine over the last month.

“This situation is in fulfillment of the prophecy of times preceding the Messiah’s coming,” said one member of the group. “We should NOT take the new Covid-19 vaccine.”

Correction, Feb. 3, 5:04 p.m.: A previous version of this article erroneously stated that Ari Goldwag is affiliated with the Lubavitch movement.