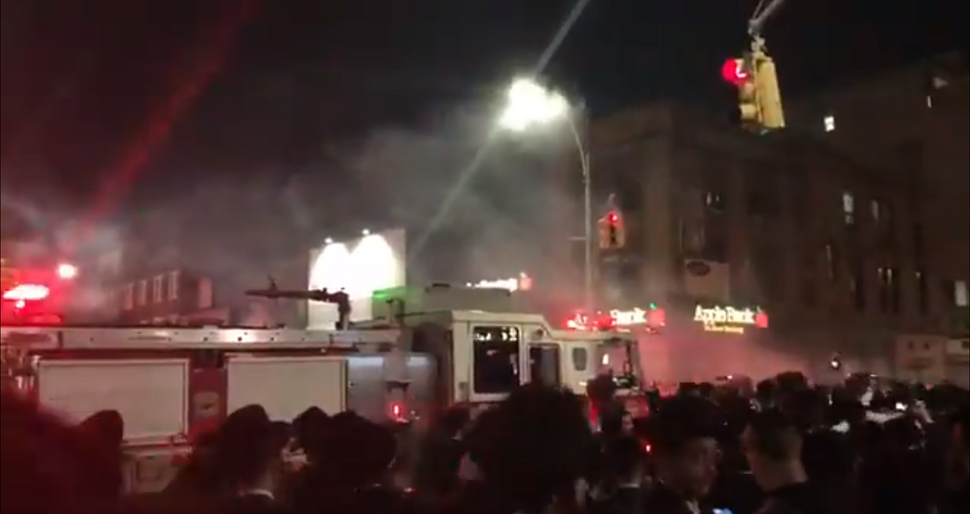 A screenshot of a video posted to Twitter of the protest in Borough Park Tuesday night. Image by NYCPHOTOG on Twitter

Orthodox Jews in the Brooklyn neighborhood of Borough Park marched in the streets Tuesday night into Wednesday morning in demonstrations that turned violent and ended with fires in the street and a man in the hospital.

Why are Haredi Jews protesting?

Borough Park is one of the neighborhoods where Gov. Andrew Cuomo has ordered public and private schools to temporarily close starting Friday because of a spike in cases of Covid-19. Like most of the neighborhoods, it is home to many Jews who are Haredi, or ultra-Orthodox.

Cuomo’s plan involves, in the areas most affected by the spikes, restricting synagogues to 25% capacity with a cap of 10 people; increasing fines for sponsors of mass gatherings to $15,000; and closing schools and restaurants.

Haredi lawmakers and residents have criticized Cuomo’s plan, as well as a plan by Mayor Bill de Blasio that overlapped with Cuomo’s and did not get state approval, saying they are unfairly targeting religious Jewish communities in Brooklyn without reason.

The other areas experiencing spikes in New York state include Kiryas Joel, Forest Hills and Far Rockaway, Queens and New Square, all of which have substantial Orthodox Jewish populations, according to state data.

Orthodox leaders have also said the governor did not consult them ahead of his announcement.

Why are the protests happening now?

Weeks of anticipation and anxiety preceded the Jewish high holiday season that began with Rosh Hashanah on Sept. 18 and continues through the festival of Sukkot this week and Simchat Torah on Sunday. Some have attributed the spikes in Covid cases to the synagogue services held on Rosh Hashanah and Yom Kippur, as well as large weddings, some indoors, in the weeks before.

Tension between the community and the Cuomo and de Blasio administrations was also ratcheted up this spring, when large groups of Black Lives Matter protesters were not admonished, and in some cases were encouraged, by local and state government officials, while Orthodox funerals and weddings were broken up and criticized.

Why did a Hasidic man get beat up?

Berish Getz, a Hasidic man who was attacked by the protesters and treated for critical injuries, was apparently beaten for filming and photographing the protest.

According to videos of the event circulated on social media, his attackers accused him of being a “muser,” or snitch in Yiddish, which is a powerful insult and call to action in the Haredi community.

Here is some video of the attack. You can hear someone yelling, “Snitch!”

In case you are unaware, for some in the community, the label is (at least in theory and in religious law) punishable by death. pic.twitter.com/StIHSyjQiZ

Haredim, like members of other insular or religious communities, typically disapprove of insiders showing problems to the outside world. The pandemic has elevated the stakes — as the community continues to be criticized for gathering in large groups and not wearing masks, people who expose noncompliance are vilified and even threatened.

Mordy Getz, Berish’s brother, received death threats in April for calling out the community for a failure to abide by social-distancing guidelines.

Does President Trump have anything to do with this?

While he hasn’t weighed in on the Borough Park protest, President Trump did tweet on Wednesday about the New York Police Department breaking up a Sukkot celebration in Crown Heights.

Wow, what does this grim picture remind you of? I am the only thing in the Radical Left’s way! VOTE https://t.co/gnlvm4swFv

The president has enjoyed widespread support among the Haredi Jews of New York, though they previously backed Democrats like Mayor de Blasio.

Why were demonstrators criticizing de Blasio, too?

While it’s Cuomo’s plan that is going into effect, de Blasio has emerged as a new foe to the Haredi Jews of Brooklyn during the coronavirus pandemic. Before March, the community enjoyed leniency on the requirement that religious yeshivas teach more secular subjects like English and science, and also won the mayor’s support on the issue of metzitzah b’peh, a circumcision ritual involving oral suction that can transmit herpes, in exchange for a reliable block vote.

But in March, after an infamous tweet by the mayor that called out “the Jewish community” for failures to social distance at a wedding, Haredi critics of the mayor have gotten louder and more numerous. In general, the issue of what some Haredi Jews see as uneven enforcement of health restrictions has galvanized members of the community who feel like they have been subject to extra scrutiny.

And while de Blasio’s plan this week to clamp down on the spikes in Brooklyn did not get state approval, it was another signal to some in the community that the relationship between the mayor and Haredi Jews in New York has changed.

While this is the first time in recent years that a Haredi protest has turned violent in New York, the community turned out for a demonstration over the summer in Williamsburg, another Brooklyn neighborhood, to protest the closure of sleep away camps and parks due to the coronavirus.

And in Israel, clashes with law enforcement are more common. This week, 17 people were arrested in demonstrations by Haredim in Jerusalem. In July, Haredi residents of Jerusalem’s Romema neighborhood protested the lockdown meant to prevent the spread of coronavirus. They set fires and threw stones and other objects at police officers in opposition to what they said was biased enforcement of coronavirus restrictions.

Borough Park is also no stranger to more violent demonstrations — in 2006, for example, a traffic stop erupted into chaos as protesters set a police car on fire.

There is a mask burning going on in Boro Park, Brooklyn. pic.twitter.com/HKebbFp3pr

When Haredi protesters burned masks at the demonstration in Borough Park, they were echoing others who have done so in protest across the United States. In North Carolina, a group advocating for the state’s reopening challenged Facebook users to “Burn Your Mask,” with the organization’s leader posting a video of her mask burning in a frying pan.

While the Centers for Disease Control and Prevention recommends that Americans wear masks in public settings when social distancing isn’t possible, mandates in states around the country have been met with resistance from people who say mask requirements are an infringement upon their personal liberties. (According to constitutional scholars, they’re not.)