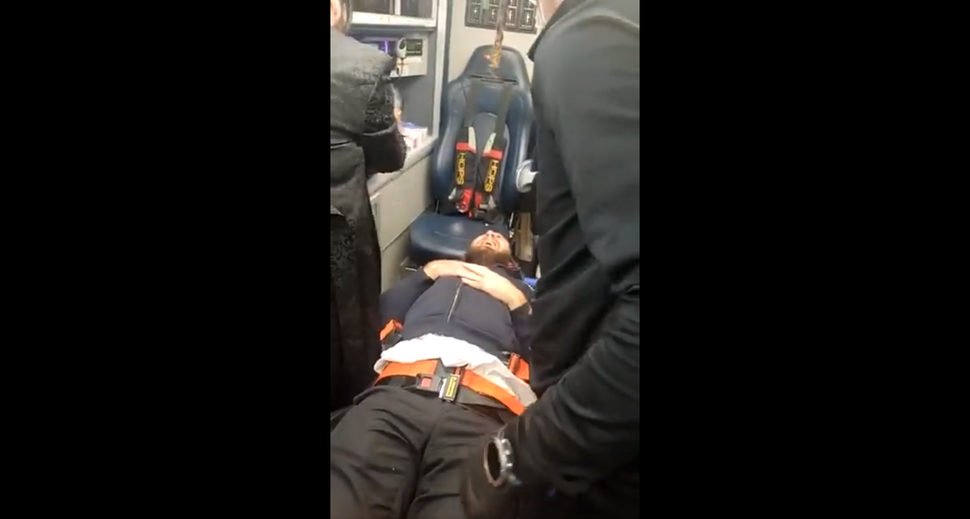 A screenshot of a video posted on Twitter of Berish Getz on a stretcher. Image by Elad Nehorai

He is now in stable condition and is undergoing body scans for injuries from the attack.

Update: One person in critical condition — being transported to Maimonides Hospital — after beaten with rocks by protesters at the anti-Cuomo protest in Borough Park early this am pic.twitter.com/aGIYgst91p

bo Getz was beaten with rocks and fists after Hasidic protesters called him a “snitch” and shouted about how “the wicked” should be “cut” off from life before attacking him for filming the protest.

Crowd cheering “all the wicked should be cut” moments before attacking ⁦@MordyGetz⁩ brother unconscious. He’s recuperating in ⁦@MaimonidesMC⁩ pic.twitter.com/JeUNSCZYNi

Mordy Getz, Berish’s brother, wrote on Twitter that two police officers tried to protect him but were also attacked.

Boro Park uprising against @andrewcuomo @nycmayor has begun. People starting fires in the street. So not normal. pic.twitter.com/AB5BpfeyvF

The organizer of the protest, Heshy Tischler, declined to be interviewed but confirmed over Twitter direct message that he organized the protest and denied claims that he incited violence.

Videos posted on Twitter show Tischler calling protesters “soldiers” and telling them, “We are at war.”

Community resident Heshy Tischler tells protesters in the presence of an NYPD inspector: “You are my soldiers. We are at war.” pic.twitter.com/9sneRVxrf3

A screenshot of a WhatsApp conversation posted to Twitter illustrated one user showing sending of Getz on the ground after the attack, with Tischler responding, “This is what happens to rats.”

Asked to clarify why he considered Getz a “rat,” Tischler said only that “a snitch = a rat.”

You are brainwashing young innocent good young boys! Stop with the madness! We arent in Nazi Germany and dont traumatized grandchildren of Holocaust victims with lies that fit your agenda! I wonder what your parents ( that were in a real holocaust )think of this!
Screenshot ; pic.twitter.com/6NtFhWkTMq

One eyewitness who spoke on the condition of anonymity said Getz was one of three people on top of a container taking photos. At one point, people started to point to Getz and shine a flashlight into his face, calling him “muser,” or snitch in Yiddish. Protesters then started throwing objects at him and, at one point, beating him with a long stick.

Here he is taking footage, shortly before the attack. pic.twitter.com/7E5JYVhSWp

When the police arrived, Getz jumped down from the container and ran, but was chased by the mob. He was treated by EMTs at the scene, near 13th Avenue in Borough Park.

Getz’ brother, Mordy, faced death threats in April for publicly calling for Haredi Jews to abide by social distancing guidelines. He declined to comment.
Tischler said there will be another protest, this one “peaceful,” at 9 p.m. tonight.